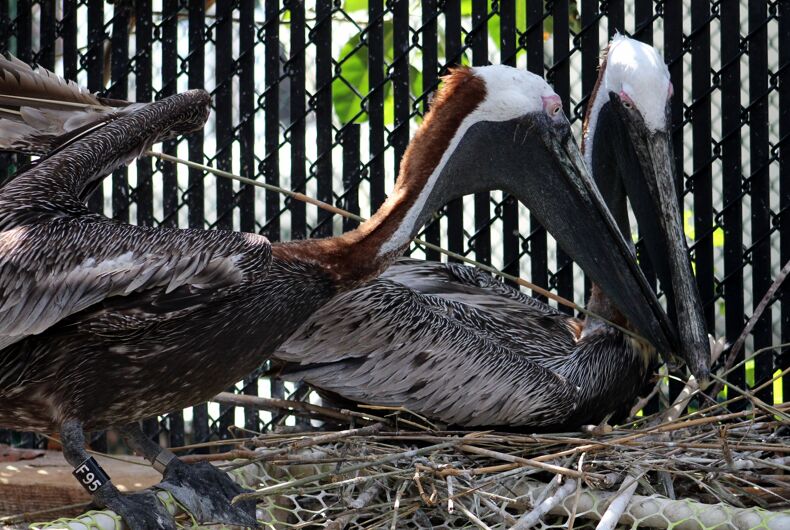 For the 18th year in a row, Pepe and Enrique have chosen each other — and no one else — as their mating season partner.

The pelicans (brown pelicans, to be exact) have lived in Miami at the Pelican Harbor Seabird Station, a wildlife conservatory and rehab facility, for nearly two decades. Every year, one of the two presents a stick to the other as a sign of affection. They build a nest together and take care of a placebo egg.

Related: Two gay penguin couples are preparing for eggs at an aquarium this mating season

Pelican Harbor specializes in brown pelicans, which are indigenous to the coasts of the Americas and is one of two pelican species commonly known to South Florida, the other being the American white pelican.

Most of the wildlife at Pelican Harbor does not live there. The center nurses injured wildlife found in the area back to health and releases them, just like a hospital. They mostly take care of seabirds, but also some mammals and owls, that frequent the Southern Florida environment. Pelican Harbor reports that an average of 2,300 patients come through in a given year.

Animals with injuries that would make it difficult for them to return to nature can live at Pelican Harbor, however. As luck would have it, both Pepe and Enrique have wing injuries.

“It’s a condition that we call ‘angel wing’, because rather than sitting flush against their body, their wing will stick out kind of like an angel’s wing,” Hannah McDougall, the Director of Communications at Pelican Harbor, told LGBTQ Nation.

Their wings have “healed incorrectly,” making them “non-releasable,” rather than letting them become prey or struggle to take care of themselves out in the wild. Instead, Pepe and Enrique have lived “a nice retirement home” life among 13 other non-releasable, special ambassador birds at Pelican Harbor.

They found each other there, and have chosen to spend most of their life with one another (brown pelicans are believed to be able to live for about 30 years in captivity, with 31 years old being the longest life cycle recorded).

As special ambassador residents, Pepe and Enrique have provided educational value to Pelican Harbor.  They are two of the ten brown pelicans living there, along with one American white pelican known as “Marilyn,” named after the actress Marilyn Monroe.

“We’re directly on the bay, which is amazing,” said McDougall. “We pump in fresh bay water for them every day. They get fresh fish. They seem happy in there. Lots of friends.”

To determine their sex, staff actually had to have the pair’s blood drawn. They’re the only in-resident, same-sex couple, and only their second same-sex couple to ever reside there. Previously, they housed a pair of female brown pelicans that went to the San Antonio Zoo in 2015.

“These are the only instances of recorded same-sex relationships in Brown Pelicans that I could find,” McDougall said.

While brown pelicans are usually “seasonally monogamous,” sticking to one partner for mating season but having a different one the next, Pepe and Enrique have stuck together, spring after spring.

“They are our beautiful special boys,” McDougall shared. “They’ve been building a nest together. They take turns incubating a fake egg that we give them. They’re in love, they’re inseparable and always by each other’s side.”

Like the other ambassadors, Pepe and Enrique are available for ceremonious adoption. For $300, you can help cover the food and care for the lovely couple for about a year. The funding also allows their caretakers to learn more about their species.

According to the website, adopters will receive a certificate and photograph of their adoptees, along with their story, a tax-exempt donation letter, and an invitation to see their new pals — under pandemic precautionary measures, of course (animals can catch COVID-19, too, although they haven’t had a positive animal yet). Pelican Harbor is typically open to the public, but is holding limited guided tours for now.

The Seabird Station was founded in 1980 and is entering its 42nd year of caring for birds and other animals. They have since treated at least 9,000 brown pelicans alone.

“We started out very slow,” McDougall said. “It was [founded by] an old retired couple that lived on a houseboat in the marina. So we’ve grown since then.”

In 2020, they had admitted over 2,300 animals. Most of their patients are bought in by public residents.

“We also — people get a kick out of this — we Uber a lot of our birds,” McDougall said, “Miami is very, very big and some people are unable or sometimes unwilling to bring birds.”

The top two reasons they had to admit an animal was because they had become orphaned, or it had an interaction with a cat. Most of the animals they admitted were passerines (an order of bird families and species including sparrows, blue jays, and cardinals) or mammals (such as squirrels and Virginia opossums).

“We are experiencing crazy, unprecedented growth in the last two years thanks to our supporters,” McDougall shared. Next year, Pepe and Enrique will join the other ambassadors in moving to a much-expanded facility in Little River, a mile west of their current island front facilities.

“Our general expenses are over $2500 a day, and it costs around $379 per treatment of each patient. So I think people sometimes don’t realize the extent of the care that we’re able to offer,” she noted.

“We’re a fully functioning hospital. We do surgeries, we do everything just like at a [human] hospital, So we just really want to educate people on conservation in general.”

In addition to considering them for adoption, you can also catch Pepe and Enrique on “Pelicam,” Pelican Harbor’s live stream of their bird sanctuary on their website and YouTube.