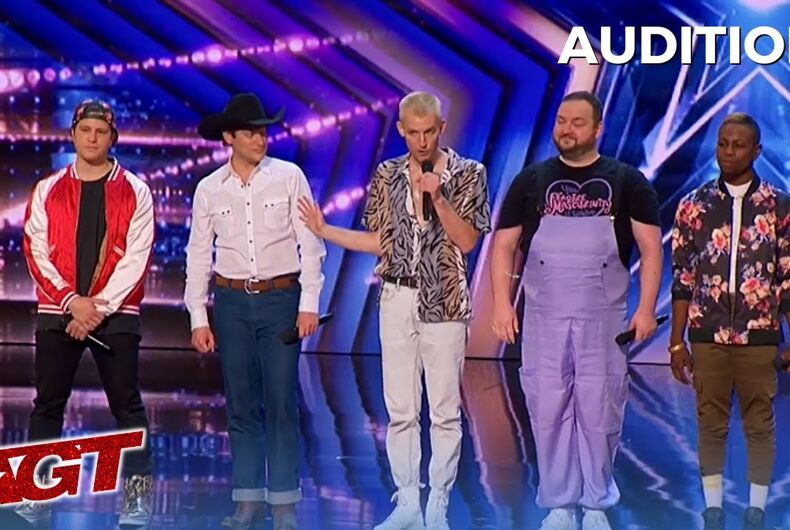 "The Other Direction" auditioned on America's Got Talent and made it past the judges.Photo: Shutterstock

Does Simon Cowell have another hit on his hands?

He’s already known for putting together the British boy band One Direction. This week on America’s Got Talent, just in time for Pride Month, Cowell and his fellow judges auditioned The Other Direction, a group that bills itself as “the world’s gayest boy band.”

Taking a cue from The Village People, The Other Direction consists of singers that each represent a stereotype: Alex the Jock; Norm the Cowboy; Jason the Party Boy, Greg the Mama Bear, and Devin the Fashionista.

“We actually met in middle school at show choir camp and we all came out to each other while we were there,” Jason told the AGT judges. “We made a pact that when we turned 21, we would come together and form the world’s gayest boy band, and here we are!”

The boys performed an original song entitled “Gurl Ur the Best,” about how much they like hanging out with girls — going to the mall, sharing a hot tub. “I can paint your toenails…and you can paint mine.”

But ultimately they break the bad news: “Gurl you’re the best and I love you, but not like that.”

“There’s so much between us,” the cowboy croons, “but I ain’t going down to Venus.”

The boys got a standing ovation and four Yesses from the judges, which means they’ll be back to perform again.

“I’ve auditioned so many boy bands over the years who were so terrible, but this was different – and it was a well-written song,” Cowell said. “Is your dream to be as successful as the other Direction?”

“This is our destiny,” Jason replied. “This is really the moment for us.”