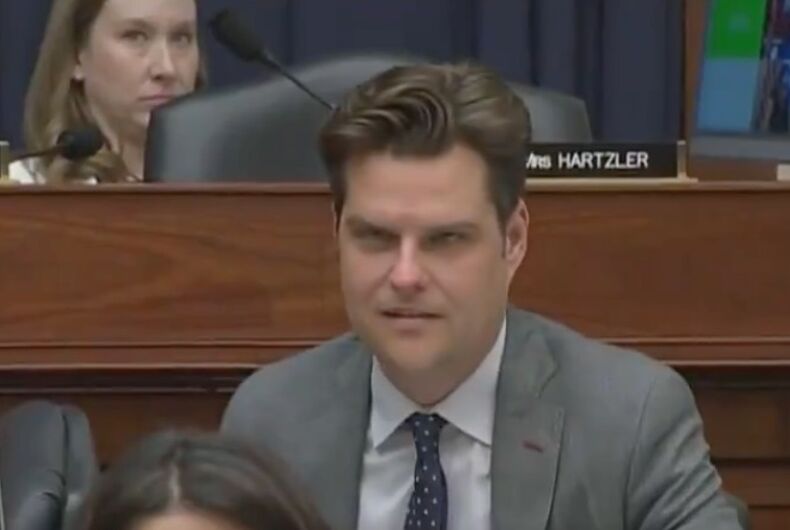 The GOP’s attempt to turn transgender women and “critical race theory” into the latest source of rage for their base is starting to backfire as Americans get fed up with their blatant racism and bigotry.

Army Gen. Mark A. Milley, the chairman of the Joint Chiefs of Staff, tore into Gaetz and Rep. Michael Waltz (R-FL) after the two went on rants about the “dangers” of the law school course examining how racism affects policy and legal decisions.

Republicans have accused the military of teaching the course to enlistees. Earlier this week, religious right activists stormed a Virginia school board meeting to demand elementary students not be taught the graduate-level course in legal theory.

“I do think it’s important, actually, for those of us in uniform to be open-minded and be widely read,” Milley responded to Gaetz. “And it is important that we train and we understand. I want to understand white rage, and I’m white. What is it that caused thousands of people to assault this building and try to overturn the Constitution of the United States of America?”

“I’ve read Mao Zedong. I’ve read Karl Marx, I’ve read Lenin. That doesn’t make me a communist. So what is wrong with understanding — having some situational understanding about the country for which we are here to defend?” Milley asked.

“And I personally find it offensive that we are accusing the United States military, our general officers, our commissioned, non-commissioned officers of being, quote, ‘woke’ or something else, because we’re studying some theories that are out there.”

Gaetz, who has also attacked the military for allowing transgender people to serve their country, was left gaping and shaking his head after getting chewed out by the general.

Saw this clip earlier from a different angle; this one has the benefit of a quick cut to Matt Gaetz flipping out Alito-at-SOTU style as he watches someone with more credibility than he and his peers have dismantle their propaganda. https://t.co/hmtE4Z9zG1