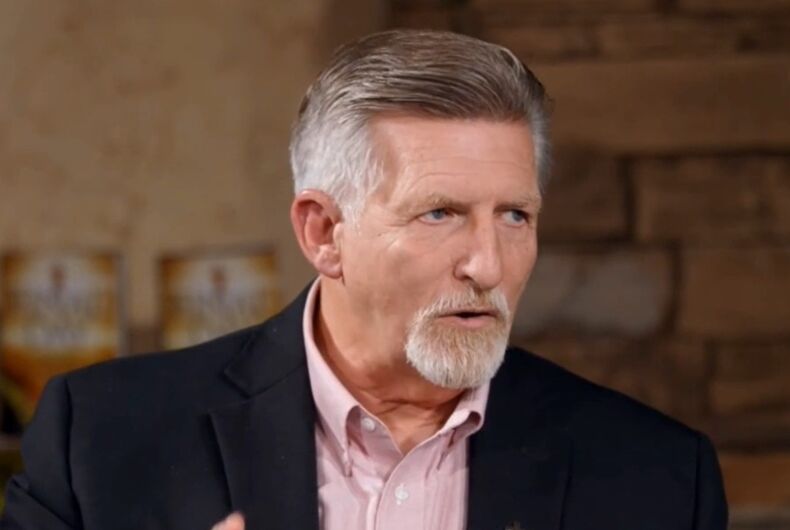 Far-right pundit Rick Wiles established himself during the pandemic as one of the top Evangelical news sources for hate-based conspiracy theories about the virus. He said that the world would be a “better place” after a “genocide” caused by the vaccines kills 70% of the population.  Time and again, he said that COVID-19 is “God’s judgment” against people he doesn’t like.

He has just been hospitalized with coronavirus.

Wiles made national headlines last year when his website got White House press credentials despite his long history of hate speech. Now his church is asking for “an army of people praying” for their ailing pastor.

“Flowing Streams [Church, where Wiles is senior pastor] is experiencing a sudden cluster of flu and Covid among some employees and their relatives,” Wiles’s news outlet, TruNews, said in a post on the conservative platform Gab last week. “Rick Wiles made the decision tonight to close the offices and studios until a TBA date next week.”

“Please pray for your TruNews team.”

“Rick is very weak,” said an email to his fans that was supposedly sent by Wiles himself on Friday. “However, his fever has ended and he has no respiratory issues.”

But by Saturday, the tone had changed.

“Rick is very much in need of your continued prayers,” an email from Flowing Streams Vice President Raymond Burkhart said. “Today, he was taken to the emergency room, and under medical advice, was admitted to the hospital. He is currently on oxygen and is expected to remain there for a number of days.”

Wiles is 67 and lives in Florida, where the vaccine is now available to anyone over age 12. But it’s unlikely Wiles himself was vaccinated – he was very publicly opposed to the vaccine.

“I am not going to be vaccinated,” he said on TruNews in early May. He discussed a conspiracy theory from a website that claimed COVID-19 had been “weaponized” by China to use against India, and the absurd website also claimed that the vaccines make people susceptible to dying from COVID-19. Those claims are false.

He said that only “stupid people” are getting vaccinated and that it’s a “good thing” that the vaccines will kill them.

For the past year, Wiles blamed COVID-19 on a wide range of people, including gay people (he railed about how the virus is “a judgment” from God when a gay man in New York died last year), transgender people (“God is about to purge a lot of sin off this planet” like “transgendering little children, perverting them”), Chinese people (he said they are being punished for their “godless communist government“), and Jewish people (“Stay out of those [synagogues]… There’s a plague in them. God’s dealing with false religions”).