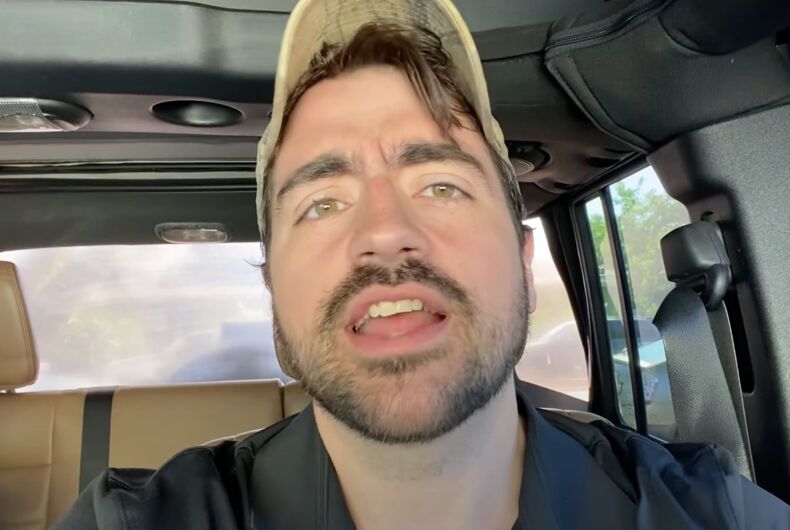 “Liberal redneck” comedian Trae Crowder regularly sounds off on politics, but this time, out Sen. Kyrsten Sinema (D-AZ) has him riled up and ready to get some things off his chest.

Sinema, along with Sen. Joe Manchin (D-WV), has refused to reform the filibuster, a procedural move used to stop legislation from moving through the body. It is a relic of Jim Crow and is currently being used to stop voting reform, raising the minimum wage, and landmark LGBTQ civil rights legislation.

While LGBTQ activists and donors pointedly issued an ultimatum yesterday demanding Sinema get on board or lose support from the community, the senator published an op-ed in the Washington Post defending her decision to scuttle bills that tackled issues she campaigned on. By refusing to remove the filibuster, Sinema has essentially doomed her own priorities.

And her excuses are pitifully thin – as Crowder succinctly points out.

“Arizonans expect me to do what I promised when I ran for the House and the Senate: to be independent — like Arizona — and to work with anyone to achieve lasting results,” Sinema wrote. “Lasting results — rather than temporary victories, destined to be reversed, undermining the certainty that America’s families and employers depend on.”

But as Crowder says, “That dog don’t hunt. It’s a porch dog. She’s got a porch dog position on this shit.”

“Only a damn moderate Democrat would be planning on a future defeat,” he adds.

“I feel like the underlying premise here is we can’t do stuff now because other people might do other stuff in the future. So it’s like, what do you think your job is? Like you know you’re literally a lawmaker, right? You can’t make laws because other laws might be made down the road? What do you do all day, you fucking window dressing?”

With the Senate evenly divided, Sinema’s support for landmark progressive priorities like civil rights legislation, increasing the minimum wage, and infrastructure repair and investment is critical.

Republicans, however, can filibuster and force the Senate to require 60 votes to proceed to an actual vote. Democrats have the ability to change the rules – allowing them to pass legislation with only 51 votes since Vice President Kamala Harris (D) would break the tie vote.

But so far, Sinema has refused to support ending the filibuster.

“The idea of the filibuster was created by those who came before us in the United States Senate to create comity and to encourage senators to find bipartisanship and work together,” Sinema said in early June, according to the New York Times, which proceeded to instantly debunk her claim and explain that the filibuster was actually created by mistake in 1806 when the Senate forgot to include a provision in its rule book to cut off debate. It has since been used repeatedly as a way to prevent civil rights bills from passing.

An OH Predictive Insights’  Arizona Public Opinion Pulse poll last March showed support for Synema plummeting. Although the results were within the margin of error, the poll shows that her unfavorable ratings outweighed positive reviews of her performance.