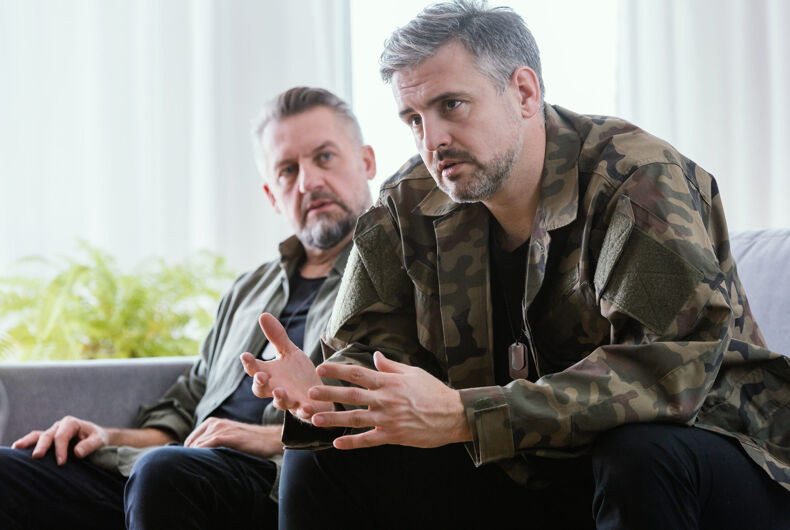 One of the benefits of being in the military — besides the honor of serving your country — is, well, the benefits. The healthcare system for the Department of Veteran Affairs (VA) provides care to more than nine million veterans. VA mortgage loans offer great rates requiring as little as $0 down on housing. The G.I. Bill allows veterans to go to school or college at the government’s expense.

But thousands of service members who have been discharged “dishonorably” for being LGBTQ are not entitled to those benefits. Rep. Seth Moulton (D-MA) estimated in 2019 that 100,000 personnel had received such discharges since World War II.

Since “Don’t Ask, Don’t Tell,” which banned LGBTQ servicemembers from coming out, ended in 2011, the military can not discharge servicemembers simply on the basis of their sexual orientation. However, there has not been a remedy for people that were discharged for that same reason under “Don’t Ask, Don’t Tell,” or prior to it, when being non-heterosexual was banned altogether.

Now, Common Defense is advocating for federal legislation to correct the wrong done to these service members.

“Congress needs to pass legislation to create a proactive program to affirmatively go back, identify all of these individuals and fix their records for them,” says Alex McCoy, political director of Common Defense, a grassroots membership organization of progressive veterans, to LGBTQ Nation. “The program needs to make them aware of the benefits they qualify for.”

“You are already having a difficult time transitioning out of the military into civilian life under normal circumstances,” he says. “To be cut off from the support to help you with that difficult challenge can be devastating.”

In addition to those circumstances, for several years, veterans have faced less benefits that honor those who served in protection of this country. It’s not just the loss of benefits, either. Employers and services providers may continue the discrimination once they ask to see a veteran’s discharge papers.

“It will often say the reason for the discharge is homosexual conduct,” McCoy notes. “We are still in a world without the Equality Act, where it is legal for employers to refuse to hire you [for being gay.]”

Currently, there is an intra-military process for veterans to challenge their discharge, but it’s an onerous process. “It’s burdensome,” says McCoy, a former Marine. “It can take years. You may have to hire a lawyers and there’s no guarantee it will work. It’s not enough to passively sit back and have an appeals process that is very opaque.”

Even if legislation passed to change it now, the challenges to surmount would be significant. Administrative discharges may disguise the reason for discharging an LGBTQ service member so it’s not always clear that their sexual orientation or gender was the reason.

McCoy says that the government would need to err on the side of caution and accept the vet’s story. “In cases of ambiguity, the should be a presumption in favor of the vet,” he says. “So much time has passed and there’s so much inconsistency that the best approach is to give the vet the benefit of the doubt.”

Right now there is no legislation pending in Congress to address the issue. Several states, including New York and Rhode Island, have taken steps to allow LGBTQ veterans access to state benefits, which are much more limited.

Rep. Mark Takano (D-CA), the out Congressman who chairs the House Committee on Veterans Affairs, has proposed a bill that would establish a commission to conduct an investigation into the historic and ongoing impacts of discriminatory military policies and practices on LGBTQ servicemembers and veterans.

“I feel strongly that this is an idea that is very captivating,” Takano told LGBTQ Nation last April.

McCoy says that he finds the commission to be a good idea, but that it doesn’t go far enough. Restoring LGBTQ veterans’ benefits is a necessary step that would tell veterans that their service is valued.

“If you are expelled from the military and told you are worthless, you’re not going to feel welcome remaining part of the veterans’ community,” he says. “You’re cut from a sense of pride.”

Acknowledging the pain and harm done by decades of anti-LGBTQ policies would be an important step toward restoring that sense of pride.