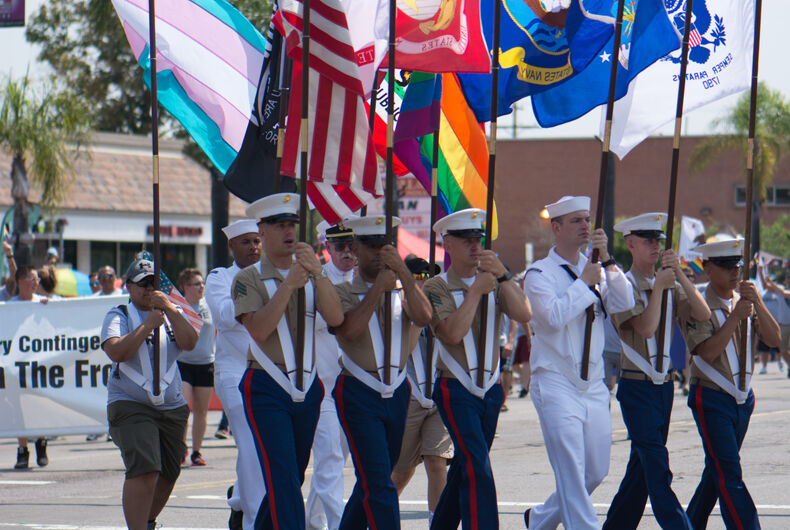 A new bill proposed by Rep. Mark Takano (D-CA) and Rep. Anthony Brown (D-MD) would establish a commission to conduct an investigation into the historic and ongoing impacts of discriminatory military policies and practices on LGBTQ servicemembers and veterans.

“It’s still early in the process,” Takano, who chairs the House Committee on Veterans’ Affairs and co-chairs the House Equality Caucus, told LGBTQ Nation. “But I feel strongly that this is an idea that is very captivating.”

The measure would be an attempt to undo some of the damage caused by years of discrimination against LGBTQ service members. It would create the Commission to Study the Stigmatization, Criminalization, and Ongoing Exclusion and Inequity for LGBTQ Servicemembers and Veterans Act.

Over the course of decades, LGBTQ service members have faced a barrage of attacks on their ability to serve the country. In 1949, the military introduced regulations that formally prohibited service by “homosexual personnel, irrespective of sex.”

When Bill Clinton was elected president in 1992, he pledged to lift the ban as one of his first acts in office. The backlash to his effort was so strong, that he was forced to back down. Instead, the military created the “Don’t Ask, Don’t Tell” policy, which theoretically was meant to let gay, lesbian and bisexual personnel serve, as long as the military was unaware of their orientation.

However, the policy merely resulted in continuing the persecution of gay, lesbian and bisexual personnel. Don’t Ask, Don’t Tell was finally repealed in 2011.

Then came the Trump administration, which waged a long battle against transgender service members. Trump announced the ban via tweet, citing “the tremendous medical costs and disruption that transgender in the military would entail.” The ban was swiftly overturned by Joe Biden when he became president.

While the attacks may be over (for now), their effects linger. For example, service members discharged received less than honorable discharges, impacting the benefits they can receive for their service. Rep. Seth Moulton (D-MA) estimated that 100,000 personnel had received such discharges since World War II.

Addressing the long shadow of military discrimination is the impetus for the new bill, Takano told LGBTQ Nation that he is impressed by the response to date.

“I’ve had several service members indicate to me that they want to serve on the commission,” he said.

As for next steps, Takano says “I don’t want to specify too much further about a pathway yet.” However, he is hopeful that veteran service organizations will weigh in on the measure.

The chances of passage in a Democratic-controlled Congress are good. Moreover, Brown has a strong working relationship with Secretary of Defense Lloyd Austin, a retired general.

Is Jerry Falwell Jr. setting the stage to return to leading Liberty University?