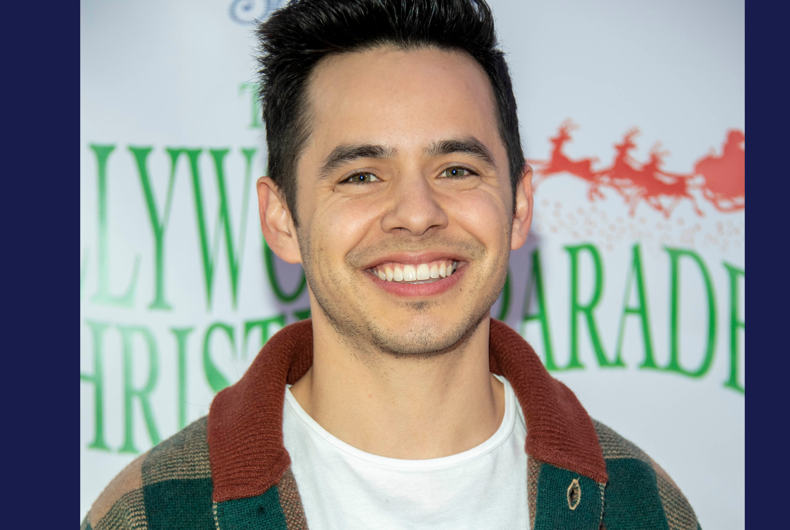 Singer-songwriter and former American Idol contestant David Archuleta has revealed that he came out as gay in 2014 to his family, but since has become unsure of how to label his sexuality since he “had similar feelings for both genders.” He also said that he has considered himself asexual because he does not have the urge to have sex, “which people call asexual.” The musician, who originates from Murray, Utah, and is Mormon, said that he wants people to have compassion for “those who are LGBTQIA+… like myself.”

“I don’t feel comfortable sharing it, but felt I needed to to bring more awareness to people in my same situation and let you know you’re not alone. You can be part of the LGBTQIA+ community and still believe in God and His gospel plan,” he said in Notes App posts to social media.

Archuleta posted four screenshot of written messages from his Notes app, explaining his fluid sexuality and his struggle to understand it through his religious beliefs.

“I like to keep to myself but also thought this was important to share because I know so many other people from religious upbringings feel the same way. I’ve been open to myself and my close family for some years now that I am not sure about my own sexuality.”

Archuleta, currently 30 years old, was born in Miami before being raised in Utah and starting to sing at competitions at the age of 10. At 12 years old, he competed in and ultimately finished as the Junior Vocal Champion on Star Search 2 in 2003.

The teen became a worldwide sensation when he competed in the seventh season of American Idol in 2008, ultimately finishing second to David Cook. Joining  debut single “Crush” became an international, top-selling hit upon its release in August 2008. He would win six Teen Choice Awards, including one for “Best Tour” for opening up for then-Disney star and fellow out entertainer Demi Lovato, by the time he was 20.

In 2011, Archuleta announced he would take a hiatus as an entertainer to become a full-time missionary for the Church of Jesus Christ of Latter-Day Saints, although Begin, a cover album he recorded prior, was released in August 2012. He also recorded a miniseries and released  an album exclusive to the Philippines, Forevermore, in March 2012.

He began his hiatus around the end of 2012 and ended it in 2014. He has since released eight studio albums in total and authored a children’s book.

In his statement, Archuleta explained in detail how he has been unsure of his sexual orientation, although he’s had sexual feelings for one or multiple genders. He does not say if he’s had same-gender romantic inclinations or any same-gender relationships.

“I came out in 2014 as gay to my family. But then I learned I somewhat have similar feelings for both men and women so identify as being bisexual. I’m still trying to figure things out as I also have learned I don’t have as many sexual desires and urges as most people,” he wrote with a skull emoji, “which works i guess because I have a commitment to save myself for marriage,” adding the laughing emoji, “which people call asexual when they don’t experience sexual urges.”

“There are people experiencing the same feelings of being LGBTQIA+, (i know that’s a lot of letters that a lot of people don’t understand, but there are a lot of unique experiences people feel and live that make them feel isolated and alone that are represented) a lot of them wrestling to follow their beliefs that are so important to them as I have.”

He continues, “Idk what to make of it and I don’t have all the answers. I just invite you to please consider making room to be more understanding and compassionate to those who are LGBTQIA+, and those who are a part of that community and trying to find that balance with their faith which also is a huge part of their identity like myself.

“I think we can do better as people of faith and Christians, including Latter-day Saints, to listen more to the wrestle between being LGBTQIA+ and a person of faith. There are more than you may realize going through that wrestle after all the misunderstandings that come with it. I don’t think it should come down to feeling you have to accept one or the other.”

“Again I don’t feel comfortable sharing it, but felt I needed to to bring more awareness to people in my same situation and let you know you’re not alone,” he wrote, “I’ve tried for almost 20 years to try and change myself until I realized God made me how I am for a purpose. And instead of hating what I have considered wrong I need to see why God loved me for who I am and that it’s not just sexuality.”

He concludes, “Even if you’re left with so many more questions with faith and sexuality like me I believe being open to both questions and to faith is how we receive answers. God blesses those who ask. So let’s keep asking and seeking, and having compassion and patience. Thank you for listening.”

Archuleta received many messages of love and appreciation from across the internet for coming out about his sexuality.

“Love you man, and so proud of who you are,” said Cook, who became the American Idol winner ahead of Archuleta.

Why isn’t there a remedy for LGBTQ veterans that lost their pride – and benefits?