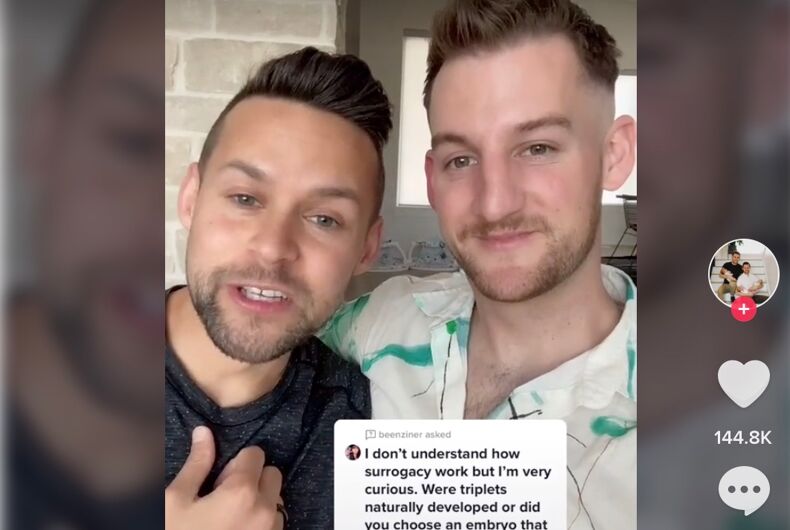 TikTokers Jake and Sean share their daily adventures raising triplet babies with their 1.4 million followers. In addition to daily doses of cuteness, the couple, who go by the username @daddiestothree, also answer their followers’ questions about their surrogacy journey and how it all works.

Recently, the couple responded to a user who asked how they ended up with triplets.

Related: This man is finally celebrating Pride at 91. He came out at 89.

“I don’t understand how surrogacy works,” the user wrote, “but I’m very curious. Were triplets naturally developed or did you choose an embryo that had triplets?”

Sean started by saying this is a really common question.

“Science is crazy!” added Jake, who said it took four people to bring their children into the world.

“We started with an anonymous egg donor that we found through a database,” Jake continued, “and she did an egg extraction and we fertilized half of those eggs with my sperm and half with Sean’s sperm and ended with 12 viable embryos. We did some testing so we knew which of those eggs were girls and which were boys and then we implanted one girl and one boy embryo, one of each of ours.”

Sean explained that the girl embryo then split, resulting in three babies.

“It didn’t happen the way that we planned,” he said, “but we couldn’t imagine life any other way.”

In another video, the couple opened up about the challenges they experienced building their family, saying that on their first attempt, they implanted two embryos and only one took. Twelve weeks later, their surrogate miscarried.

They also discussed how their plans for the embryos they have left.

“I’m pretty sure our family is done with three,” Jake said. “We’re kind of on the same page there. It sounds a little bit too hard for us to have other biological exact matches to our children, so we are leaning towards donating those embryos to science.”