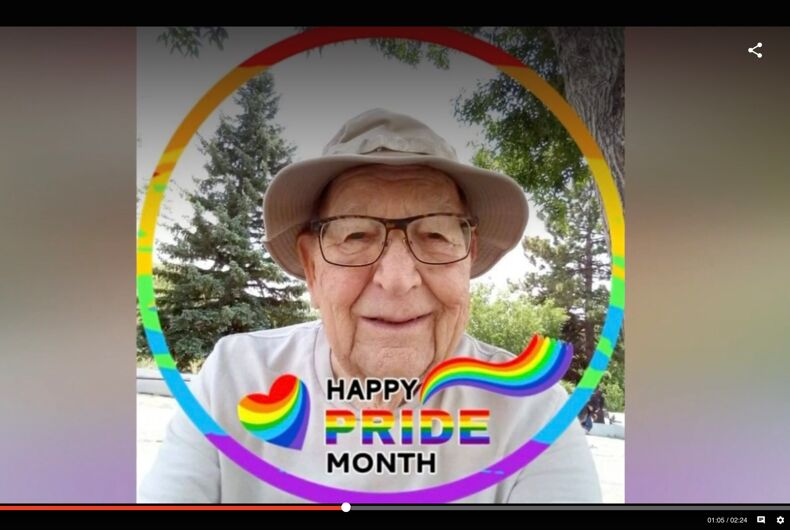 This year in Denver, a man who came out at the age of 89 is finally celebrating Pride,

91-year-old Ken Felts spent most of his life in the closet. He knew was gay at age 12, but he grew up in a conservative Christian 1940s family and served in the U.S. Navy during the Korean war. He never felt free to be his true self.

Related: This service rep just won Pride with her response to a customer upset about rainbow marketing

Felts recounted the challenges of keeping his secret, as well as his very real fears of losing his daughter if he had come out as a younger man.

“I got married in 1963 and had a child in 1972,” Felts said. “The marriage was not a good one. I was doing my best to be as straight as I could. It was just constant alertness. I was being very careful and dressing very conservatively all the time because I never wanted people to know that I was gay. I didn’t want to be outed because I could lose custody of my daughter.”

At 89, Felts began battling cancer and decided to write a memoir. Stories of a man he named Phillip he once loved came pouring out. He decided to tell his daughter about him.

Felts explained to her that when he got married, he destroyed everything he owned that was related to Phillip–except for a single photograph.

On his Instagram, Felts posted that photograph, along with an excerpt from his memoir recounting the first time he and Phillip met.

“We seemed to have an immediate attraction for one another and began a friendly association,” he wrote. “He made the first moves…He was good at drawing me out and comfortable to talk with.”

After finally sharing his truth with his daughter, Felts decided it was time to tell his friends. He meant to privately share his news with a select group on Facebook, but he accidentally posted it publicly.

Heartfelt messages came pouring in for Felts, who has since begun a relationship with a man.

“I was getting messages from people all over about my coming out,” he told CBS Denver.

“It was almost all positive, very positive, over and over. ‘Congratulations’ and ‘welcome’ and things like that.”

“It was a huge experience of freedom,” he added. “I wasn’t looking over my shoulder worried about who’s wondering if I’m gay or not.”

Despite having come out in 2020, the pandemic meant Felts had to wait until this year to finally celebrate Pride as an out and proud gay man.

He hopes other LGBTQ people will look to his story and see how beautiful coming out can be.

“You’ll be very surprised about the response,” he said. “The world is full of love, and you’re entitled to some of it, and people are going to give it to you if you take the chance, if you come out and say ‘here I am.’”