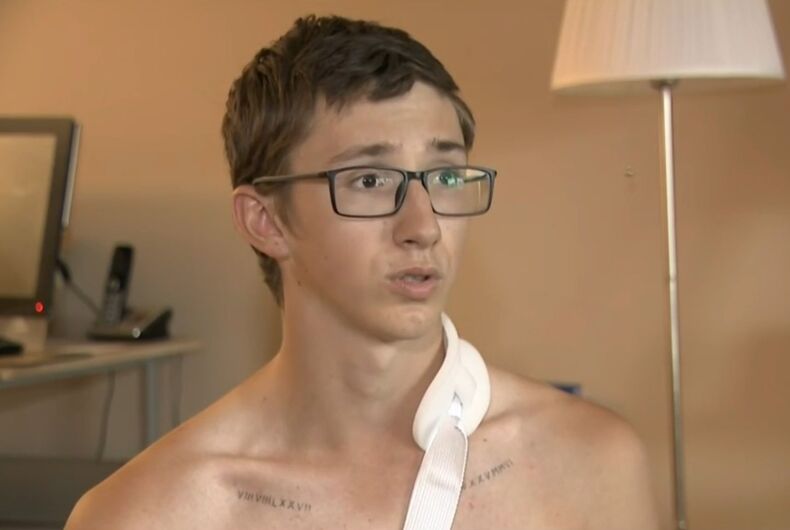 Dylan Spinosa, 20, was on his way home from New York City Pride festivities Sunday evening when an attacker who allegedly yelled an anti-gay slur stabbed him in the back, just as he and his friends were standing up for a woman who was being harassed.

The incident took place inside the Staten Island ferry terminal. Spinosa and his friends, who were wearing Pride gear, were waiting for a cab when they noticed a drunk man, later identified as 47-year-old Eric Shields, making inappropriate comments to women in the terminal.

Related: A man & transgender woman were both stabbed on the NYC Subway in separate hate crimes

Spinosa told the New York Daily News that the man was “harassing every girl that he passed by, talking to them sexually.”

Another person who was in the terminal who did not want to make his name public said that Shields was “talking about raping” the women there. “You know, very disturbing stuff.”

“He was in her ear, sexually harassing her, saying he was going to have sex with her,” Spinosa said. “Me and this other guy were like, ‘Dude, leave her alone. Go home. You’re drunk. This doesn’t have to get any further.”‘

The witness told CBS 2 that he told Shields to stop harassing the women and that’s when Shields “looked at me and said, ‘Um, what are you looking at?’ and then he said the f-word and I proceeded to step up to him.”

Spinosa’s friends and others were wearing Pride flags, but he said that he did not hear Shields say “faggot.” Police believe that he did based on information from the others who were there.

The witness said that he and Shields fought and that’s when Spinosa intervened, and he succeeded in putting Shields in a headlock after he threatened the 20-year-old by saying he had a gun.

Spinosa then went to get the injured man water when Shields ran at him. Spinosa heard his friend scream before Shields stabbed him in the back. At first, he said, it felt like he was punched in the back.

“I didn’t notice that I was stabbed until a police officer and my friend said, ‘You’re bleeding.’ He had a blade I want to say was about three to four inches long,” Spinosa said.

Shields has been arrested in connection to the attack and the NYPD Hate Crime Task Force is still investigating whether the attack will be prosecuted as a hate crime. The New York Daily News said Shields has 34 prior arrests in New York City, but this is his first since 2005.

“It’s upsetting,” Spinosa, who hopes to become a firefighter, said. “I don’t understand how people can think they are above somebody else.”

He told to the New York Post that if presented with the same scenario again, he’d do the exact same thing.

“There would be no hesitation,” he said.

Gay dads explain how they were surprised with triplets

U.S. embassies have flown the Pride flag in some of the most anti-LGBTQ countries on Earth this year