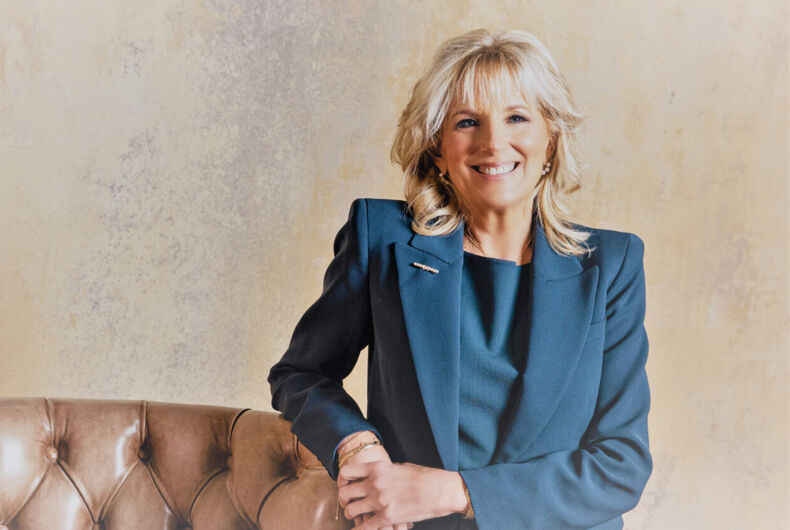 First Lady of the United States Dr. Jill Biden is on the cover of the August issue of Vogue Magazine, with the cover photographed by Annie Leibovitz and her profile written by Jonathan Van Meter.

On the cover, styled by Tonne Goodman, the First Lady poses on a White House balcony, as she wears a blue floral dress made by Oscar de la Renta, with Tiffany & Co earrings.

When rumors arose that Leibovitz, a famed celebrity photographer, was photographing people at the White House, former Press Secretary Kayleigh McEnany complained that she, other female members of the Trump administration, and former first lady Melania Trump never received attention from the magazine.

Not that they wanted it, of course. It just would have been nice to be asked, they suggested.

At the time, with rumors claiming that Leibovitz was there to photograph Press Secretary Jen Psaki, McEnany said, “It’s just so sad that you have a fawning press corps like this, a fawning media sycophantically covering members of the Biden administration,” while making a point to claim, “No Vogue profile necessary here.”

Melania and Donald Trump often commented on not getting asked to be in the magazine, complaining when Dr. Biden was featured in Vogue in 2019 as a former Second Lady and questioning when Beyoncé received a cover in 2018.

Now, Dr. Biden is the second woman from the Biden-Harris administration to grace the magazine’s cover, following Vice President Kamala Harris in February.

.@flotus @drbiden stars on the cover of our August issue! Read the full profile: https://t.co/nxKE4csnjT pic.twitter.com/gopBPIxCff

NEW! @voguemagazine AUGUST 2021 COVER STORY! Featuring @FLOTUS
👇
"A First Lady for All of Us"

"She is, quite simply, a joy multiplier." "here’s a first lady who is driven, tireless, effortlessly popular, but also someone who reminds us of ourselves."https://t.co/viBvQ4dDBY

When Harris’s magazine cover was released, the famed fashion outlet run by Anna Wintour received backlash for what people perceived as a poor choice of a cover photo. When more pictures came out, people complained and some were convinced that a poor photo was chosen intentionally for the cover.

Further, the internet version and the print version had different covers, and it was reported that the Vice President’s team had expected a different photo to be used.

“The team at Vogue loved the images Tyler Mitchell shot,” a spokesperson for Vogue told CBS News regarding those photos taken by the magazine’s first African-American cover photographer — but they felt “the more informal image captured Vice President-elect Harris’s authentic, approachable nature — which we feel is one of the hallmarks of the Biden/Harris administration.”

In the profile, Dr. Biden’s work as an educator while balancing her newfound First Lady duties is explored. President Biden and their grandchildren are featured in the photographs as well.

A separate article explores the fashion choices of Dr. Biden, whose office has made it a policy not to discuss or comment on her clothing. The other Vogue article explains that Dr. Biden “keeps diversity in mind” when choosing outfits. A recent choice, for example, was to wear Dolce & Gabbana, a fashion haus run by two gay men, when accompanying Biden to the White House event recognizing Pride on June 25.

Dr. Jill Biden — a First Lady for all of us. pic.twitter.com/4eXDzkjAOa

So fortunate to work for "A First Lady for All of Us" who is a "joy multiplier" America won the @FLOTUS lottery. https://t.co/sSq1IeiWWk

Melania Trump: “Give me a f*cking break. Who gives a f*ck about Jill Biden? Where’s MY f*cking Vogue cover?” pic.twitter.com/c9cvU0BLC1

Vogue: "A First Lady for All of Us: On the Road with Dr. Jill Biden" https://t.co/kZuTVobAQZ

Raise your hand if you’ve been on the cover of Vogue as First Lady pic.twitter.com/pqcG3yOEY6