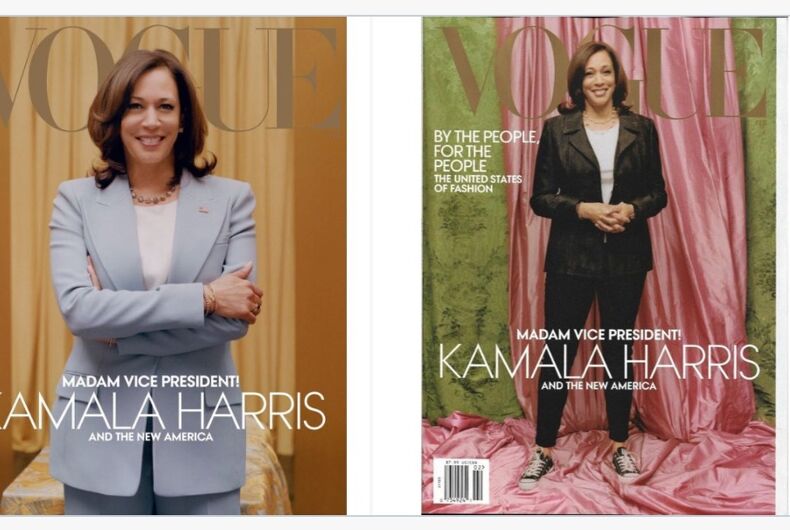 After years of nonstop horrific news out of the Trump administration, the first scandal of the Biden administration has finally happened. In an outrageous move reminiscent of that time former President Barrack Obama wore a tan suit, the internet is outraged over a Vogue cover photo of Vice President-elect Kamala Harris.

The photo on the print version of the magazine shows Harris wearing her trademark Converse sneakers and a dark suit in front of a pink and green background meant to honor her sorority, Alpha Kappa Alpha, the first historically Black sorority. A different photo is being used online with the article.

Related: A gay Trump supporter crowdfunded his trip to DC & is now bragging about storming the Capitol

But Harris’s team say they thought the other photo – showing Harris in a powder blue suit with her arms crossed – would be used as the cover photo with the more casual shot used inside the story.

Making history was the first step. Now Harris has an even more monumental task: to help heal a fractured America—and lead it out of crisis. Read the full profile: https://t.co/W5BQPTH7AU pic.twitter.com/OCFvVqTlOk

Journalist Yashar Ali pointed out on Twitter that fashion magazines regularly coordinate with featured celebrities on the photos that will be used on the cover.

Miscommunication aside, social media seemed to take the more casual photo as a slight to the Vice President-elect despite it showing her trademark style. The other photo is more reminiscent of Hillary Clinton’s standard blue pantsuit and was deemed more professional by social media fashion experts.

The photographer, Tyler Mitchell, tweeted the blue suit photo, saying it was “for the cover.” Mitchell was the first African-American photographer to shoot a cover photo for the magazine.

Madam Vice President-Elect Kamala Harris by me for the cover of American Vogue February issuehttps://t.co/IHh3WsjEWD pic.twitter.com/2twTvC4FHp

“The team at Vogue loved the images Tyler Mitchell shot and felt the more informal image captured Vice President-elect Harris’s authentic, approachable nature — which we feel is one of the hallmarks of the Biden/Harris administration,” a spokesperson for Vogue told CBS News.

“There are not many Black women, let alone Black and South Asian women, that grace the covers of these high-end magazines,” another source told the outlet. “[For Harris], it was important for young men and women, people of color, to see that this is possible.”

Insurrections stormed the Capitol building last week at President Donald Trump’s urging because he has refused to accept the election results and has tried desperately to remain in office so he can continue gutting civil rights protections, praising white supremacists, and letting Americans die during a pandemic. There’s a strong chance that the president could be impeached in the next 24 hours.

The cover on the left is the least dignified & greatest insult to a remarkable woman who shattered multiple glass ceilings & is now the most powerful woman in the US. Surely editors have better sense & taste to refrain from disrespecting the 1st VP. Put in some effort

Seriously? THIS? This is what we're complaining about today? Fucking terrorists are running loose after attempting to have a fucking coup de etat IN THIS COUNTRY.

Glad our fucking priorities are straight.

What a mess up. Anna Wintour must really not have Black friends and colleagues. https://t.co/8oCpEPkltU

Wintour didn’t help her photographer look good, either, by changing the agreed-upon photo as well. These photos represent much better tonal communication, even in the more candid pics. Sure, there’s value & temperature differences, but all look better than what Wintor published. pic.twitter.com/QbFVSQ12rS

That's because you're a fan of the VP, which is clouding your judgement. I'm not. The backdrop looks cheap. She's blown out by the lighting. It's taken from an awkward angle. It should really be a close-up. It is not editorial. She did not agree to the photo; vogue switched it.

Trump Jr whines about his dad’s ban from Twitter: He hasn’t been “killing homosexuals!”