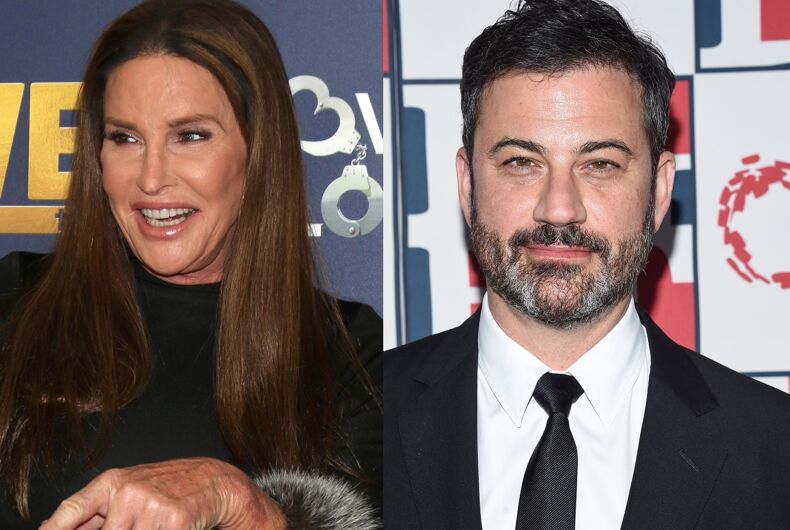 California gubernatorial candidate Caitlyn Jenner lashed out at comedian Jimmy Kimmel, calling him transphobic for a joke about how her political style is similar to Donald Trump’s.

“Are you sure that isn’t Donald Trump in a Caitlyn Jenner wig?” Kimmel joked on Jimmy Kimmel Live! last week before showing photos of the two side-by-side making the same faces.

“He obviously believes that trans women are simply men with wigs on,” Jenner said on Twitter. “Where is the outrage from the left or LGBT community? Being WOKE must be optional if you are a Democrat.”

Last night @jimmykimmel called me Donald Trump with a wig. He obviously believes that trans women are simply men with wigs on. Where is the outrage from the left or LGBT community? Being WOKE must be optional if you are a Democrat. pic.twitter.com/1PITkYE01w

Kimmel was riffing on Jenner’s appearance on The View, where she refused to say that Trump lost the 2020 election and President Joe Biden won. She has in the past said that she supports Trump and then lied about not voting for him last year.

Kimmel showed some side-by-side pictures of Jenner’s and Trump’s facial expressions when he joked about how Jenner is Trump in “a Caitlyn Jenner wig.”

During the monologue, Kimmel referred to Jenner by her deadname. Jenner did not mention that on Twitter – she has previously said that she does not care about being deadnamed because even her mother misgenders her sometimes.

He also joked about Jenner’s lack of qualifications: “Caitlyn Jenner has a better chance of being the next Batman than she does the governor of California.”

Jenner went on a Twitter tirade against Kimmel, bringing up racist and sexist jokes he has made in the past, as well as a sketch where he used blackface. Kimmel apologized last year for the blackface sketch.

Sad that @jimmykimmel has contributed to #AAPIHate. Is there any group he won’t attack? Jimmy, it’s time to #StopAsianHate pic.twitter.com/4LzMuMPzHY

Speaking of @jimmykimmel he also received a pass from the WOKE on his use of black face and racist actions. Hypocrite. pic.twitter.com/C7Ecke95kG

Also @jimmykimmel got a pass from the WOKE while he asked women to fondle him in public. His treatment of women is wrong. Disgusting. Vile. pic.twitter.com/DIHUA6ZgC0

"Where is the outrage from the communities I'm literally campaigning against 🤔🤔"

If you gave two shits about the trans community you’d stop trying to create fights with talk show hosts and actually do some fucking work that benefits trans people. pic.twitter.com/y5OeoTYRzs

Jimmy was actually talking about your politics and who they align with… and you're proving him right cuz just like Donald… you're playing the victim, girl.

Anyone that doesn't support same sex marriage has no business speaking about the topic of fairness in the LGBT community honey.

Lmfao that’s not what he meant and you know it, and your attempt at feigned indignation is freaking hilarious. If you can’t handle what Kimmel said you don’t have the temperament for this job.

Someone even brought up Jenner’s 2017 appearance on Jimmy Kimmel Live!, years after some of the incidents she mentioned in her tweets happened.

“You’ve always been my favorite,” Jenner told Kimmel at the time, explaining why she went on his show. She was promoting her book Secrets of My Life on his show.

How many versions of the Pride flag are there now? You might be surprised.