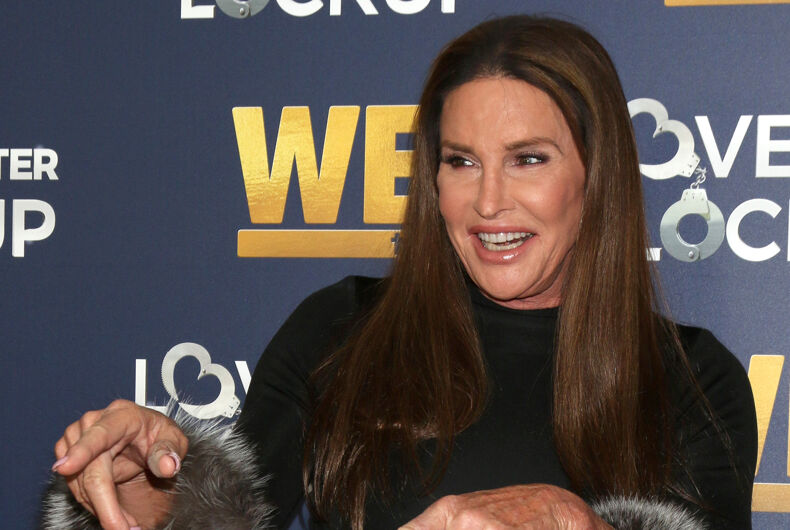 Caitlyn Jenner just did her first interview as a candidate for California governor, and there are three takeaways: 1) she really wants you to know that she’s rich; 2) she still loves Donald Trump; and 3) she thinks she’s a good role model for trans youth.

But did she mention that she’s rich? So rich that her interview with Fox News’s Sean Hannity was filmed in her private airplane hangar in Malibu? So rich that her biggest problem right now is that the man with the hangar across from hers got so tired of seeing homeless people in the street that he moved to… Arizona?

Jenner is running as a Republican in the upcoming recall election of Gov. Gavin Newsom (D). Her first campaign ad cast Newsom as an “elitist” and Jenner as a woman of the people with an estimated net worth of $100 million, and a family full of millionaires and billionaires.

But parts of her interview with Hannity last night didn’t quite sell that “woman of the people” image.

“My hangar… the guy right across, he was packing up his hangar and I said, ‘Where are you going?’ And he says, ‘I’m moving to Sedona, Arizona, I can’t take it anymore. I can’t walk down the streets and see the homeless,'” she said, explaining why she’s running.

Caitlyn Jenner to Hannity: "My friends are leaving California. My hangar, the guy right across, he was packing up his hangar and I said, where are you going? And he says, 'I'm moving to Sedona, Arizona, I can't take it anymore. I can't walk down the streets and see the homeless'" pic.twitter.com/Z1WbBBQXq7

She kept that energy until the end of the interview, saying that she’s just going to take a nice leisurely flight in her plane – did you hear that she has her own plane? – and even Hannity didn’t know how to respond.

Hannity asked her about her position on banning transgender girls from school sports and misgendering. This past weekend, she said that transgender girls shouldn’t be allowed to compete in school sports, referring to trans girls as “biological boys,” echoing transphobic rhetoric commonly used by other Republicans and the religious right.

She started her response by making sure Hannity understood that she’s not one of those trans people.

“I mentioned a second ago, my mom sometimes… when she gets upset, she…” Jenner started her response, talking about how her mother even misgenders her so it’s OK for others to. “I don’t have a problem with that, the community has a bigger problem with that.”

About bans on transgender girls in school sports that Republican lawmakers all over the country are trying to pass, Jenner said, “I think we have to make sure that the integrity of girls’ sports is there, I think that’s extremely important.”

“For me, as a trans woman, I think role models are extremely important for young people,” she continued. “Our suicide rate is nine times higher than the general public. For me to be a role model for them, to be out there.”

“I am running for the governor of the state of California, who would have ever thunk that?”

Caitlyn Jenner explains that she's opposed to transgender girls playing sports against other girls. But then in the next breath she says she wants to be a role model for transgender girls. pic.twitter.com/DwlofpaREO

Jenner was one of the most prominent LGBTQ people to support Donald Trump’s 2016 presidential campaign, and she continued supporting him into his presidency as his administration dismantled transgender rights. By 2018, she admitted that supporting Trump was “a mistake.”

“What I like about Donald Trump, is that he was a disruptor,” Jenner told Hannity now that she’s running for governor. “He came in and shook the system up.”

Hannity brought up how she did criticize Trump, and she said that that was just about “trans issues, LGBT issues” but “there were some good things he did.”

“On the other hand, Biden, I don’t think I’ve agreed with anything,” she said, adding that the Biden administration “scares me.”

lol you can tell that even Hannity is embarrassed by this pic.twitter.com/YigvpnB55d

In other notable moments, Jenner tried to take credit for the state of California re-opening businesses and loosening Covid-19 restrictions.

This is one of the focuses of her early campaign, criticizing Gov. Newsom handling of the pandemic and the lockdowns. California is already in the process of re-opening schools and most schools might even be open by the time the recall election happens as the vaccination rate increases.

But she’s not going to wait even that long to take credit for re-opening the state. She told Hannity that the state started re-opening – which involved guidance on re-opening schools issued in March, well before she announced her campaign – because of rumors that she was going to be running for governor.

She also showed her lack of political experience by mixing up “legal” and “illegal” immigration.

"You're pro *legal* immigration" — Sean Hannity puts words in Caitlyn Jenner's mouth when she talks about immigration. Jenner responds by saying, "sorry, did I miss the legal part? Thanks for catching me. You've got my back, Sean, I appreciate that." #journalism pic.twitter.com/TC6Lj4x060

In a statement, Newsom’s campaign said that Jenner was “going on Trump’s favorite television station for an event with Trump’s favorite host.” Trump remains generally unpopular in California.