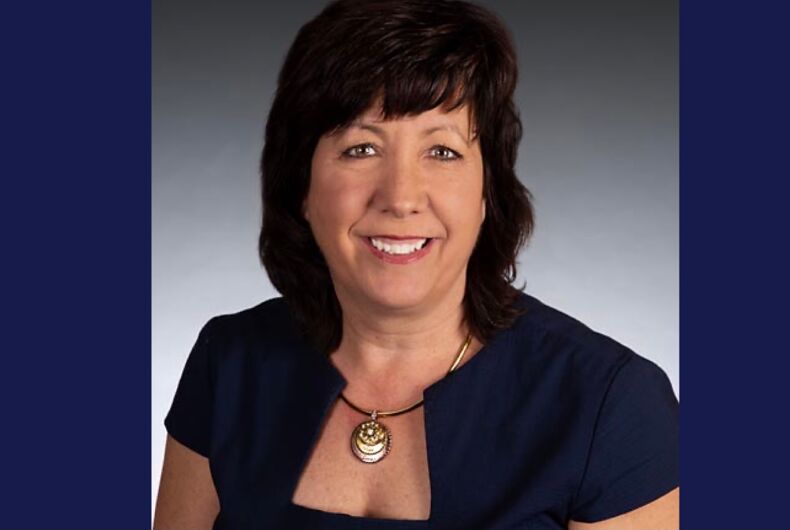 On AR Watch, a watchdog group reviewing footage of legislative sessions from the Arkansas General Assembly, has added state Rep. Mary Bentley (R) to its watchlist.

“Trans Arkansans were under attack during the 2021 General Session. One [legislator] took it to another level when she called all Trans people abominations from the well,” they report. They shared footage of Bentley, arguing for an anti-trans bill she introduced.

Quoting from the Bible, Bentley said, “A woman shall not wear anything that pertains to a man, nor man put on a woman’s garments. For all who do so are an abomination.”

Bentley, who regularly wears pants and sported a blazer while she spoke, was reading from Deuteronomy 22:5. The same chapter also condemns anyone who wears mixed fabrics and doesn’t have a parapet (or protective wall) on their building’s roof.

She also read from Genesis 1:27, regarding God’s creation of Adam and Eve — “as male and female, He created them,” she interprets.

Her comments were made around March, when she was pushing for House Bill 1570, or the so-called “Arkansas Save Adolescents From Experimentation (SAFE) Act,” which has since passed and become law.

Here is the video of Mary Bentley calling people who wear articles of clothing from a different gender an “abomination”. Gonna be a good day to wear a suit and tie. #arpx #TransRightsAreHumanRights pic.twitter.com/5IgwFKf4Cm

The law bans gender-affirming care of any kind from being given or even offered for consideration to trans youth, including surgery (which trans youth rarely undergo before the age of 18), hormone therapy, and reversible puberty blockers.

Arkansas Gov. Asa Hutchinson (R) vetoed the bill, but his veto was overridden by the General Assembly, which has passed more anti-trans bills into law than any other state in the country. It goes into effect starting July 1, although a lawsuit from the ACLU hopes to prevent that.

Bentley also introduced and pushed for House Bill 1749, which would allow educators to misgender and deadname students if they wish, and protect them from reprimands if they choose to do so.

The bill didn’t specify how an educator would determine a student’s biological sex, but Bentley claimed they could amend the bill to clarify later if they found it necessary. A fellow Republican reported that the number of teachers that “had been sued for not using a student’s preferred name or pronoun in Arkansas” is zero.

House Bill 1749 passed the House despite Gov. Hutchinson’s objections but did not receive further consideration beyond reading in the Arkansas Senate.

Bentley also co-sponsored House Bill 1882, known as the “Arkansas Privacy Accommodations Act.” This bill gives a person the right to sue if, while in restrooms at schools, offices, or government-run facilities, they encounter someone that was assigned to different sex at birth than them.

This bill stalled, but a similar law was enacted in Tennessee.

“[Bentley’s] behavior and outright hatred for marginalized communities can no longer be tolerated. Like many other representatives, Bentley operates within her own values and vendettas. Her values? They don’t align with what’s good and fair,” On AR Watch concludes.

“Arkansans deserve leaders who will listen to and work for the people.”

John Waters, Divine & the power of being shamelessly proud