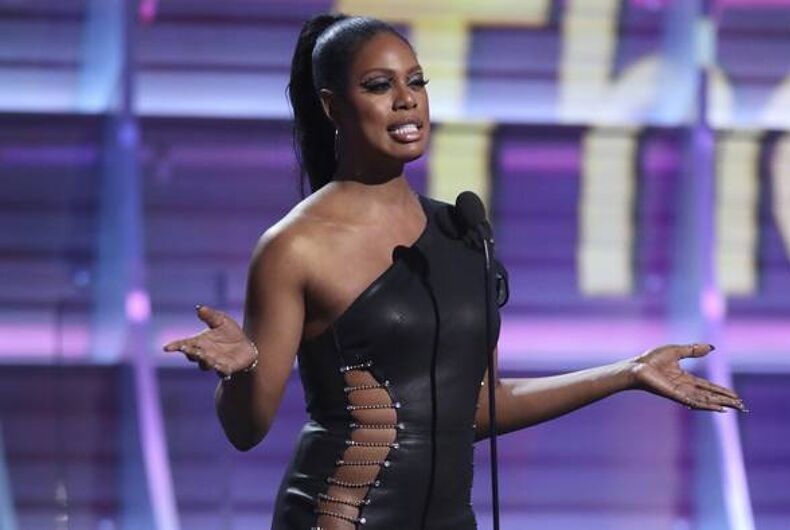 Universal Pictures has postponed and will reschedule distribution of the Academy Award-winning film Promising Young Woman in Italy and Spain due to a cisgender male dubbing the voice of the character played by Laverne Cox.

Cox’s character, Gail, is voiced in Italian by Roberto Pedicini, who gives the character “a distinctly masculine” voice. The movie studio apologized to Cox and the trans community for “this mistake” and vowed to have the film redubbed.

The film was slated to come out yesterday in Italian markets, but after clips of the dubbed voices were seen online, there was fierce criticism of the film’s distributors for misgendering Cox in the casting decision.

Now the European division of Universal Pictures is also pulling and re-dubbing their films from the Spanish and German markets to “reassess” and make changes due to similar decisions to cast a male actor for those voice roles.

“We are deeply grateful to Laverne and the transgender community for opening our eyes to a bias that neither we nor many in our industry had recognized,” said Universal Pictures International in a statement. “While there was no malicious intent behind this mistake, we are working diligently to fix it.”

“We have begun redubbing Ms. Cox’s voice with female actors in our international territories and are pushing back release dates to ensure the correct version is available. We are sorry for the pain caused but are thankful that we can address the situation on this film and prevent similar mistakes from happening again on future projects,” the statement concluded.

“I think this dubbing choice was a straight-up act of violence… It’s insulting. I’d feel bullied if I were [Cox],” Vittoria Schisano, a trans woman who has dubbed Cox’s voice for films in Italian languages before, told the Guardian.

Schisano said of Universal’s decision, “changing one’s mind can be a smart approach. We can all make mistakes, but those who are smart apologize, take a step back and try to fix it.”

Promising Young Woman, directed by Emerald Fennell and starring Carey Mulligan, won the Best Original Screenplay Award at this year’s Oscars and was also nominated for Best Picture. It premiered at Sundance Film Festival in January 2020 and was released theatrically in December 2020. Cox plays the main character’s boss and straightforward confidante in the film.

Cox’s role in the film was considered trailblazing and received praise across the industry. Cox said her part in the film, which deals with gender violence and abuse, is important because “consent is not just an issue in heterosexual relationships.”

Cox has not publicly commented on the controversy as of yet. A source told People magazine that she was not aware of the issue prior to the news breaking this week.

It was recently announced that Cox, known for her role in the Netflix series Orange Is the New Black, will become the new host of the E! Network’s iconic red carpet coverage, Live From E!

The news follows current host Giuliana Rancic’s announcement that she is moving on from the role to work on other projects with E!’s parent company, NBC Universal. Rancic has been the host for the past twenty years and was preceded by Joan and Melissa Rivers.

Pride in Pictures 1960s: How a group of angry bar patrons launched a movement