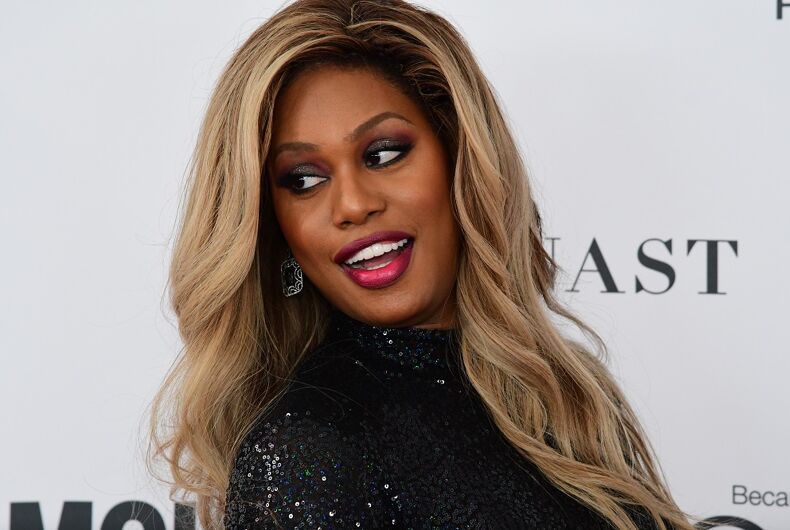 E! recently announced that actor Laverne Cox will be the new host of the network’s iconic red carpet coverage, Live From E!

The news follows current host Giuliana Rancic’s announcement that she is moving on from the role to work on other projects with E!’s parent company, NBC Universal. Rancic has been the host for the past twenty years and was preceded by Joan and Melissa Rivers.

Cox, a four-time Emmy nominee who is no stranger to strutting the red carpet, will officially take over in early 2022. In addition to awards show coverage, Cox will also host a series of celebrity interview specials.

In a statement, Cox said she is “so excited” and “deeply humbled” to take on the role.

“For many years I would wake up early on awards show days, get my snacks in place and watch E!’s coverage all day long,” Cox said. “I dreamed of walking red carpets… I can’t wait to get started while hopefully serving up fashion fantasies for the ages, honey.”

“As we continue to evolve the way we cover Hollywood’s biggest nights,” Neal said, “Laverne’s passion for, and extensive knowledge of, the fashion community resonates with our audience and we look forward to seeing her shine on the other side of the velvet rope.”

The announcement comes as award shows continue to face a reckoning for their lack of diversity. In fact, NBC recently announced that it will not broadcast the 2022 Golden Globes due to the Hollywood Foreign Press Association’s dire need for systemic reform.

In the press release, E! said that her “passion for advocacy, fashion and fun aligns with E!’s commitment to build out a modern, inclusive and interactive experience for celebrities and their fans.”

Cox rose to fame for her groundbreaking role as Sophia Burset on Orange is the new Black and she currently hosts her own Shondaland podcast, The Laverne Cox Show. She is a part of the upcoming Shonda Rimes limited series, Inventing Anna. She is also the Executive Producer of Disclosure, a Peabody-nominated documentary that examines the way transgender people are depicted in television and film.

Fans have rejoiced at E!‘s decision.

Bow down to @enews for choosing @Lavernecox as their new E! Red Carpet host! This is the world I want to live in!!!! https://t.co/N8OQzTdHMF

Omg OMG QUEEN @Lavernecox congratulations totally the right person to be there live from the red carpet #LaverneCox 💕❤️ #LGBTQ we are proud of you https://t.co/fAmMPVxjuV

@Lavernecox is always on my fav list on the red carpet. Seeing her as the new host of E! isn't only exciting but also a strong message for transgender visibility and trans people of colour. It's about time and we're so ready for it! ♥️♥️ https://t.co/w21krru1pA

We’re celebrating #PrideInPictures with you this summer! Here’s how to join us.