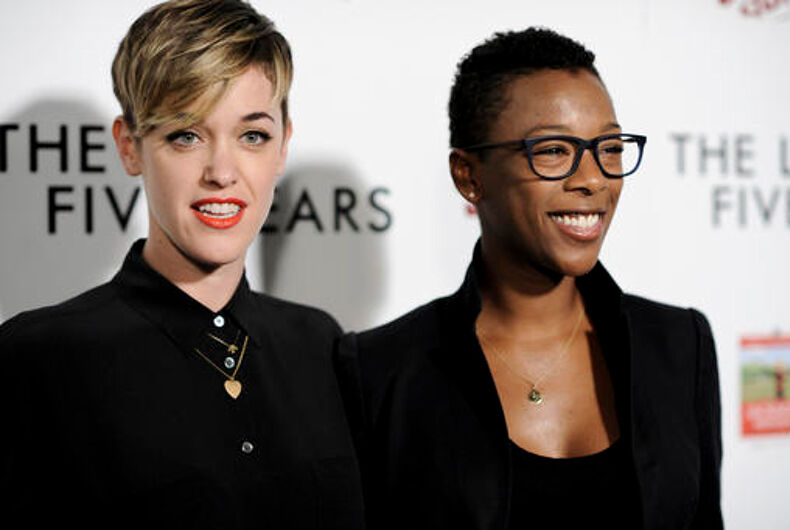 Out actor Samira Wiley and her wife screenwriter Lauren Morelli, who both worked on the hit Netflix series Orange Is the New Black, announced the birth of their new baby on Instagram on Mother’s Day.

The two introduced the world to their child, George Elizabeth, who was born on April 11, 2021.

Related: These are some of our favorite loving mothers we’re honoring for Mother’s Day

“4 weeks ago today, our daughter came into the world and changed everything,” Morelli wrote in her Instagram post. “We are so happy, so grateful, and so tired. George Elizabeth, 4.11.21 ❤️”

Wiley wrote in her own post, “happy 1st Mother’s Day to my beautiful wife.” She noted that Morelli, “after laboring for almost 3 days[,] gave birth to our first child—our gorgeous daughter, George.”

Both made the posts with a photo of George’s hands holding one of Morelli’s and Wiley’s fingers.

“Welcome to the world, babygirl. We love you and we thank you for giving us the best 1st Mother’s Day two ladies could ask for.”

It was not publicly known that the couple was expecting a baby and the couple left no clear hints in their social media activity.

However, it wasn’t a secret to all. Former Orange Is The New Black star Madeline Brewer commented, “oh my god oh my god oh my god she’s here,” signaling she found out prior. “I’m so happy for you guys,” said Jackie Cruz, another star of the show.

Regardless, many of their fans and friends are buzzing with happiness and support.

“Ahhh this is wonderful news,” wrote actress Casey Wilson. “Huge congrats to you both I’m so happy for you!!!!”

The couple met on the set of OITNB, which ran on Netflix from 2013 to 2019. Wiley starred as inmate Poussey Washington, while Morelli serves as a writer and producer.

Morelli would come out in 2014, writing in a Mic article that she realized she was gay on one of her first days on the set of the Netflix prison dramedy in 2012. Later, she would ultimately divorce her then-husband.

“We spent four days in a row working together,” Wiley recounted in 2017. “Honestly, I thought she was gay the first time I met her.” Wiley had been out for several years prior, a proud lesbian from a religious family. Her parents are pastors of the first black Baptist church to perform same-sex union ceremonies in Washington, D.C.

After OITNB, Morelli worked as the executive producer of Tales of the City, which also aired on Netflix in 2019. She has also directed an episode of Netflix’s Teenage Bounty Hunters.

Wiley currently stars on Hulu’s The Handmaid’s Tale, currently in its fourth season. She won a Primetime Emmy Award for Outstanding Guest Actress in a Drama Series for her turn in the show thus far. She also appeared in the shows You’re the Worst and the most recent season of Will & Grace.

The best vaccine against the Republican agenda is a civics lesson