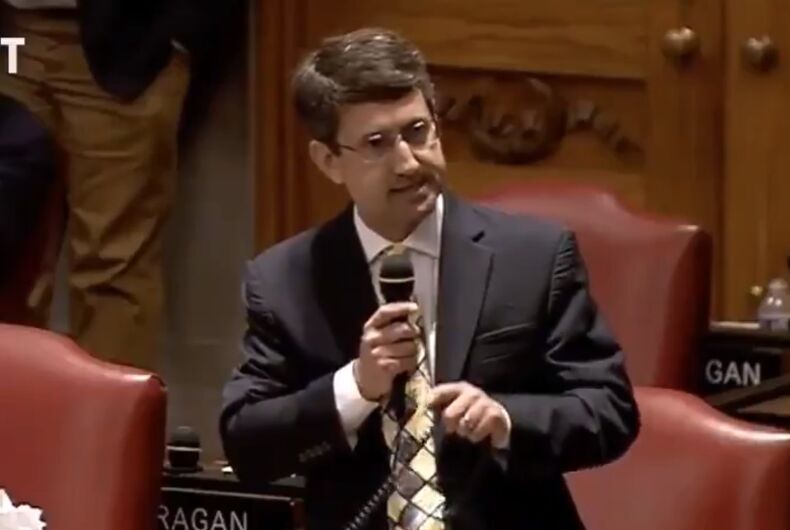 A Tennessee lawmaker has come under fire for saying that the Three-Fifths Compromise – the constitutional provision that said that enslaved African people in the U.S. only counted as 60% of a human being – was actually a good thing.

State Rep. Justin Lafferty (R) was arguing for a bill this past Tuesday in the Tennessee General Assembly that would limit funding to schools that teach about systemic racism, but he ended up showing why such education is necessary in the first place.

Related: White mom goes viral after she cries that she’s “not a racist, dammit!” at school meeting

The Three-Fifths Compromise, which was accepted by the Founders at the 1787 Constitutional Convention, said that for the purposes of apportioning members of the House of Representatives – and, therefore, electoral votes – enslaved people would be counted as three-fifths of a human being.

Lafferty said that the Three-Fifths Compromise was “a bitter, bitter pill” that actually limited the power of slave states.

“The Three-Fifths Compromise was a direct effort to ensure that Southern states never got the population necessary to continue the practice of slavery everywhere in the country,” he claimed.

“By limiting the number of population in the count specifically limited the number of representatives that would be available in the slaveholding states, and they did it for the purpose of ending slavery — well before Abraham Lincoln, well before the Civil War,” he continued.

None of this is true.

TN State Rep. Justin Lafferty (R) claims the three-fifths compromise — counting Black people as less than a person — was included in the Constitution "for the purpose of ending slavery." pic.twitter.com/A6OpfRIwMd

His explanation of history has a few issues, including that the Three-Fifths Compromise didn’t limit the power of white people in slave states. If anything, it greatly and unfairly expanded their vote, since enslaved people in those states weren’t actually allowed to exercise their right to vote.

The white people in those states were given an extra 60% representation compared even to white Northerners, representation that they stole from enslaved people. Northern state representatives at the Constitutional Convention initially opposed the Three-Fifth Compromise for this very reason.

Moreover, it didn’t end slavery before the Civil War. Slavery, in fact, exploded in the period between the Constitutional Convention and the Civil War and one of the reasons it couldn’t be stopped or curtailed was because of the outsized power white Southerners had in the federal government due to the Three-Fifths Compromise.

Last, the legacy of the Three-Fifths Compromise includes the horrific message it sent: the American government believed that Black people were not full human beings.

“I thought it was horrible,” Tennessee state Rep. Antonio Parkinson (D), chairman of the Black Caucus in the Tennessee House of Representatives, told the New York Times. He said that Lafferty’s comments were offensive and that it was even worse that he got applause from his Republican colleagues.

“I don’t care if it’s policy or how you’re counting heads, there is nothing good about slavery.”

The bill they were debating is one of many Republican lawmakers are trying to pass all over the country to ban “critical race theory,” which they say is being taught in schools even though it’s not. The bills seek to limit what schools can teach about America’s history of racism and some language used to talk about sexism, privilege, and other movements for equality.

State lawmakers also recently considered two other bills that would limit what schools can teach. The state legislature sent H.B. 529 to the governor’s desk, which he signed yesterday. It would require schools to notify parents if sexual orientation or gender identity are going to be mentioned in class 30 days in advance and gives parents the ability to opt their children out so that they don’t have to hear that LGBTQ people exist.

The other bill is H.B. 800, which would ban books in schools “that promote, normalize, support, or address lesbian, gay, bi-sexual, or transgender issues or lifestyle.”

The bill says that discussing LGBTQ people “offends a significant portion of students, parents, and Tennessee residents with Christian values.”

This morning on @NewDay, @LauraAJarrett did some debunking of TN State Rep. Justin Lafferty's (and others') claims about the Three-Fifths Compromise. pic.twitter.com/w0ZKm3yScS