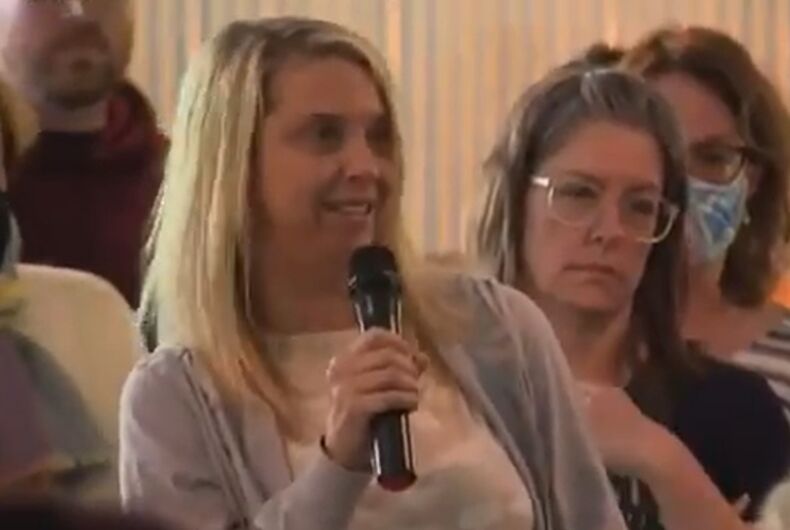 She opposes diversity education, but she's not a racist dammit!Photo: Screenshot/KSDK

A video of a white mother breaking down in tears about how she’s “not a racist, dammit!” at a Missouri school district’s community forum has gone viral.

Controversy was stirred up in the Rockwood School District in St. Louis’s suburbs about possible “critical race theory” being taught in schools. Administrators said that they were getting angry emails about things that aren’t even being taught in school from parents who were mad that anyone was talking about “white privilege,” and the emails got so threatening that the school district had to increase security.

According to KSDK, one mother spoke about how her daughter allegedly feels “regret” for being white.

“She is one of the most innocent little girls in the whole world, and she has friends, Black and white kids in her classroom, and she doesn’t see any difference,” she said. “I have actually raised my kids to love people and accept people no matter what, and just because I don’t want critical race theory taught to my children at school doesn’t make me a racist, damnit!”

“These people don’t even know what Critical Race Theory even is,” writer Skylar Ezell noted on Twitter. “They just heard Fox News tell them it was their newest boogeyman and they lost their shit.”

These people don’t even know what Critical Race Theory even is. They just heard Fox News tell them it was their newest boogeyman and they lost their shit. 😂

Teachers at the Rockwood School District got a message from the administration telling them that parents have been calling and sending emails, angry about “critical race theory” being taught in schools.

“I had to look this one up!” the administrator wrote, admitting they had never even heard of critical race theory. They said that any lesson in the district that mentions the history of racism in the U.S. – or even uses words associated with discussing oppression like “gender norms, stereotypes, identity, relationships of authority, etc.” – are getting lumped into “critical race theory” and generating anger among white parents.

Rockwood Assistant Superintendent Dr. Shelley Willott said critical race theory is not taught in the district. The diversity issues talked about in schools are there, she said, to “present various perspectives.”

Racism erupted in the district in 2020 when administrators banned the baseball team from wearing hats with the “Thin Blue Line” flag, a modified version of the American flag that conservatives often use as a response to protests of police killing people. Superintendent Mark Miles called it a “potentially divisive symbol” in a letter to parents.

This led to the community conversation forum last Friday, attended mostly by opponents of anti-racist education.

“What we’re concerned about is that there’s propaganda being taught, and we’re sending our kids there to be taught basic math, history, science,” said forum organizer Kenneth Rosa, who does not have kids in the district. He said that he wanted to get involved because of the baseball hat controversy.

“Those are college type subjects that should be addressed at that age, as opposed to propagandize children to fan the flames, so to speak, in between children of different races,” he said that the forum. Critical race theory is a field of legal scholarship and is therefore generally not taught in grade school.

A few supporters of diversity in schools attended, like mother Kelly O’Brien. She discussed a survey of students at an elementary school in the district that found that Black students don’t feel comfortable in the school.

“I am here because to me it’s very important that every student at Rockwood feel seen, heard and safe, and right now, students of color do not feel that way,” Kelly O’Brien said. “We just want to expose our students to diversity of thought, diversity of experience and perspectives. I think that helps students become critical thinkers.”

“This is an echo chamber of white people,” she said as she was booed by the crowd.

J.K. Rowling event gets canceled at book fest because of her anti-trans statements