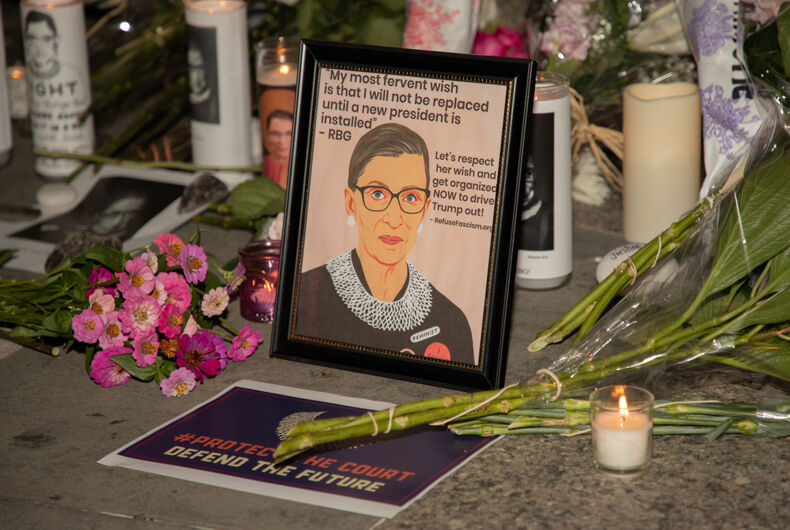 While Ginsburg’s death is mourned by the country, her legacy of fighting for gender equality isn’t being celebrated by the right – her death is.

Complete with anti-Semitic slurs, they say the honored jurist was a “mass murdering hag” who “ruined more lives than Hitler, Mao & Stalin combined.”

“With glowing tributes from leftists, pro-aborts, LGBTs and the mainstream media pouring in from around the globe, I personally mourn her death because she apparently did not know Christ. This past month I prayed for her soul, that she would prepare to meet God,” evangelical activist and former GOP politician Gordon Klingenschmitt told followers.

“Now she has met God. Since I’m not her Judge, it’s not for me to say if Ginsburg is in heaven or hell.  But those are the only two options…”

Former Trump campaign advisor Frank Amedia, the founder of POTUS Shield, found it “very interesting that a Jewish princess was taken home on Rosh Hashanah — or taken somewhere, praise the Lord, I’ll leave that to him.”

Amedia’s group is a bunch of far-right evangelicals who pray for God to assist Trump’s mission to attack the poor, immigrants and minorities.

Intercessors for America, a group tied to televangelist-turned-White House aide Paula White, echoed Amedia’s comments, telling their followers, “Incidentally, Ginsburg died and left this vacancy on Rosh Hashanah, the Jewish New Year – a day of new beginnings. Is this a new beginning for the Supreme Court and perhaps a turning point for our nation?​”

Evangelical activist and media personality Dave Daubenmire also made the comparison to Adolf Hitler and found him lacking when compared to the frail but fierce Ginsburg.

“Hitler condoned the killing of at least six million,” Daubenmire said. “Ginsburg – 60 million. Do you mourn Hitler’s death? Who’s more wicked? If it wasn’t a tragedy that Hitler died, why is it a tragedy that she died? Can somebody explain that to me, please?”

“Hitler had good intentions,” he continued. “He reformed Germany. He did a lot of good things. He rebuilt their economy. We’re just not going to hold this murder of these Jews against him, are we? He did a lot of great thing. Ruth Bader Ginsburg, why she went and advanced women’s rights. She brought women out of the kitchen. Oh, she did so many good things.”

“Do you see where I’m going with this, folks?” he concluded. “Wake the heck up. She was destructive. She was wicked and destructive.”

“Maybe God wants to strip away the veneer of lies and distortions surrounding our upcoming vote in November. Then force us to see what’s really at stake,” John Zmirak wrote at the rightwing Christian site Stream, suggesting that God killed Ginsburg “at just this moment for some special reason.”

Operation Rescue was blunt about using the opportunity to advance their Christian nationalist agenda, telling their cult members that “this is a moment we have been waiting for.”

Today is National Voter Registration Day. Here’s how to make sure you can vote.