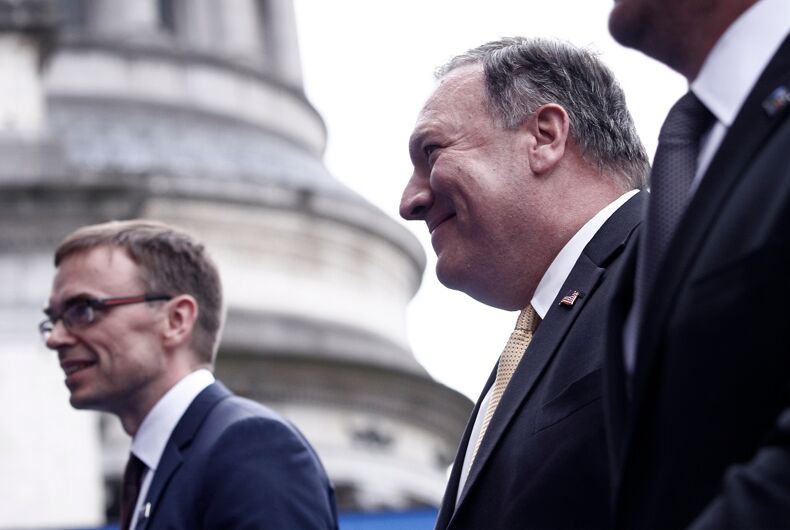 Former Secretary of State Mike Pompeo arrives for a working dinner of NATO members at the Parc du Cinquantenaire in Brussels, Belgium, on Jul. 11, 2018.Photo: Shutterstock

Former Secretary of State Mike Pompeo urged the members of a designated hate group to run for school boards nationwide.

Pompeo told podcast listeners they should proselytize in the workplace under the guise of religious freedom and then get elected to public office to “defend” it.

Related: Unhinged GOP lawmaker arrested after trying to be a substitute teacher. He terrified the students.

The Family Research Council (FRC) has been designated a hate group by the Southern Poverty Law Center. The group had close ties with the Trump administration.

After decrying the Biden administration’s popular rollback of the draconian religious right guidance installed by Pompeo and his Republican colleagues throughout the federal government, Pompeo told listeners how to “get back on the right track.”

“First, speak your faith. Talk about this with your friends at work,” he said. “Make this something that is a topic of conversation. Let them know how you think America needs to proceed. When we do that as faithful servants of the Lord, we have every opportunity to make America better.”

“Second, live it. Run for school board, join the PTA, participate in a community activity, underwrite an organization like this one or another great organization that is promoting religious freedom and the values that we care about.”

“Finally,” he continued, “elections do have consequences. If we can gain control of the Senate [and] House, in addition to more governorships and more state legislatures, the risk that the Biden administration will be able to undermine the things that we hold most dear will be greatly reduced. Every one of us can participate in that. I hope everyone will join us.”

Pompeo’s subordinates repeatedly spoke out against their boss’s bad religious proselytizing and disregard for basic protocols.

The secretary’s advance team originally flagged the group as problematic after finding “overtly anti-gay fliers” at the location where the event would be held. Other employees pointed out that the group promotes the dangerous practice that frequently leads to suicide.

The Secretary created the Commission on Unalienable Rights, a group stacked with far-right evangelical Christians and religious extremists, to “examine” existing civil rights laws and prioritize them. Unsurprisingly, the group found that “religious freedom” was more important than women’s reproductive freedom and LGBTQ rights.

Hesitant about getting the COVID vaccine? Here are some reasons why you should get it.

White mom goes viral after she cries that she’s “not a racist, dammit!” at school meeting