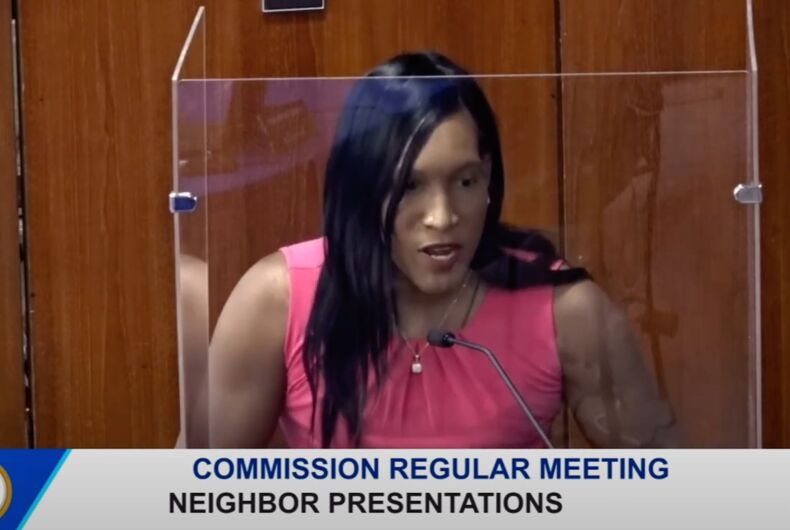 Local business owner Carvelle Estriplet, a Black transgender woman who is appointed to the Wilton Manors Community Affairs Advisory Board, spoke at last night’s meeting to castigate the two councilors. Estriplet saved most of her fire for Moraitis and the fuming politician took her turn at the microphone to insult Estriplet by challenging her to an arm wrestling match.

Estriplet used her time at the podium to thank the councilors who had voted in favor of the resolution. She also took aim at Democratic Councilor Robert McKinzie who wasn’t present for the vote but had indicated that he opposed the measure.

“Commissioner McKinzie, I just want to inform you that Black trans lives matter, as well,” she said to McKinzie, who is a Black man.

But then she rounded onto Moraitis, who had made repeated anti-LGBTQ comments about transgender youth playing school sports.

“Being hypocritical? You can change that. You claim to be faithful. Follow through. Practice what you preach.”

Moraitis responded by continuing to defend her position that transgender girls should be discriminated against and cited Caitlyn Jenner as proof.

The transgender celebrity recently announced she would challenge California Gov. Gavin Newsom (D) in a recall election. She is running as a Republican and earlier this week announced she opposes allowing trans girls to compete. It is her only campaign position so far and a complete reversal from her earlier statements on the matter.

“I do have to say I think you have a physical advantage over me, being born a biological female,” Moraitis said. “I have to look at Caitlyn Jenner, what she said this week. I have to look at people who also have experience and see what they say.”

Estriplet shot back, “Are you calling me a man?” The Republican denied the allegation.

“Then why you don’t stand for the rights?” Estriplet pointedly asked. Moraitis blithely ignored the question to keep speaking about why she thought Estriplet didn’t deserve the same civil rights that the Republican enjoys.

Commissioner Steve Glassman, who is gay, broke up the back-and-forth, thanking Estriplet for standing up trans people.