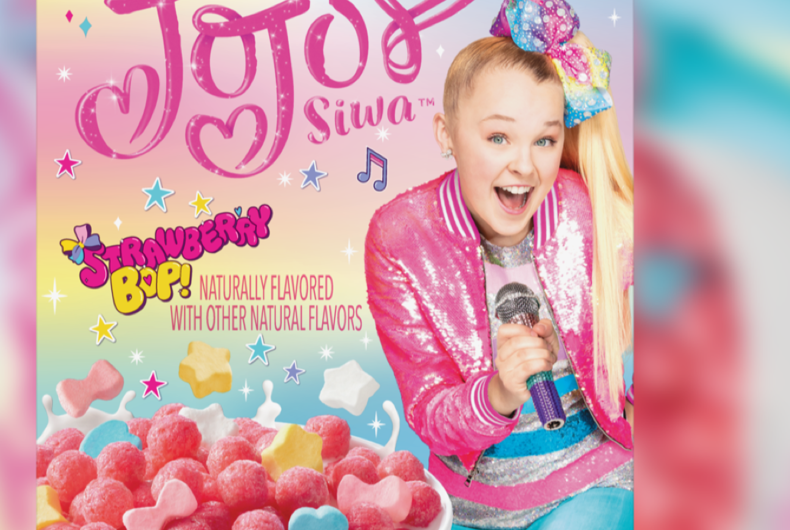 Out teen sensation and Nickelodeon star JoJo Siwa and General Mills have teamed up to bring the star’s bows and bops to a cereal aisle near you.

JoJo Siwa’s Strawberry Bops are coming out in June and will continue to be available “permanently” after Pride Month.

Related: Teen sensation JoJo Siwa couldn’t sleep for days because of backlash to her coming out

Family Size boxes will be available at the manufacturer-suggested retail price of $4.99, with mid-size boxes coming in at $3.99.

The cereal was first reported to be in the works in March, just two months after the 17 year-old came out.

At just 17, Siwa is already one of the most celebrated entertainers in the world. “JoJo Siwa is a ray of sunshine in a world that seems scary right now,” Kim Kardashian West wrote in her profile of the artist for Time in September 2020.

Siwa first came to prominence as one of the students featured in two seasons of the reality show Dance Moms. From there, she has grown into a YouTube personality, teen entertainer, and arguably one of the most influential people in the world. She has hit songs, fills stadiums for her concerts, and has merchandizing deals with Target, Walmart, and JC Penney where her name and face are slapped on all sorts of products.

She has released three international-charting extended plays (EPs), and her debut single, “BOOMERANG,” came out when she was 13. It has been officially certified Platinum twice — while the video has earned over 930 million views — since 2016.

Fresh from starring on various Nickelodeon shows, the bow-wearing star left hints that sparked online speculation about the teen for weeks. She confirmed the news by showing off a gift from her cousin — a shirt that read “Best. Gay. Cousin. Ever.” Siwa wore the shirt in a post to social media on January 22, writing “my cousin got me a new shirt” and thanking her for it. She also shared comments congratulating her and fans expressing how proud they are of her.

“She changed history today for the future of LGBTQ youth,” out online personality Tana Mongeau said on Instagram. The 17-year-old got congratulations from Ellen DeGeneres, Lil Nas X, and other stars.

She said that she’s still exploring labels for her sexuality but that she usually uses the word “gay” at the moment, the same word that she used to come out to the world. She also uses “pansexual” because “have always been my whole life is just like, my human is my human.”

General Mills collaborating with the out sensation is nothing new for the company, which has stood with the LGBTQ community for years against backlash. Anti-LGBTQ groups like the Family Research Council (FRC) and National Organization for Marriage (NOM) attempted boycotts when gay couples were featured in commercials for Cheerios, one of their cereals, or when the company gave same-sex couples custom Betty Crocker-brand cakes for their weddings.

The Golden Valley, Minnesota-based conglomerate stood in support of marriage equality as early as 2012. Since then, they have repeatedly work with LGBTQ groups and consistently rank atop the Human Rights Campaign (HRC)’s Corporate Equity Index, which is the “national benchmarking tool on corporate policies and practices pertinent to lesbian, gay, bisexual, transgender and queer employees.”

General Mills has earned a perfect score for fifteen years from the advocacy group and is a signatory on the HRC’s Business Coalition for the Equality Act.