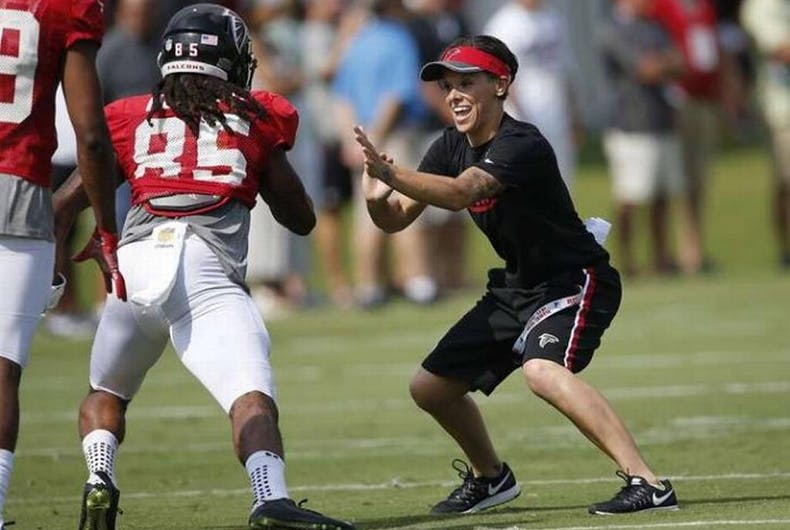 Katie Sowers, the out American football coach who became both the first woman and first LGBTQ person on the sideline during the Super Bowl, has been hired by a new team.

After working for the San Francisco 49ers until the end of the 2020 season, Sowers has been hired by the Kansas City Chiefs — the team that defeated her 49ers in Super Bowl LIV.

“Retired from coaching in the NFL? Nah,” Sowers posted to Instagram to announce the news. “Kansas City… I’m home!” Sowers was born and grew up in Hesston, Kansas.

She will be employed by the Chiefs through the Bill Walsh Diversity Fellowship, which aims to “use NFL clubs’ training camps, offseason workout programs and minicamps to give coaches an opportunity to observe, participate, gain experience and eventually get a full-time NFL coaching position.”

Several Black NFL coaches, including Mike Tomlin, current head coach of the Pittsburgh Steelers, have participated in the Fellowship and gone on to be successfully hired in its 30-plus years. Participants are employed by their team’s terms, which determines the “hiring, compensation and coaching duties” of the fellows.

Sowers’ employment will run at least through the off-season and pre-season, which concludes when the season starts in the first week of September.

“Huge thanks to the [Chiefs] organization for believing in me and providing me another opportunity to grow my coaching experience while learning from the best in the game through the …fellowship,” Sowers wrote. “Let’s keep growing the game. See you this summer, chiefs kingdom.”

The Chiefs are led by head coach Andy Reid and quarterback Patrick Mahomes. They have become one of the league’s top offensive teams over the last three seasons under offensive coordinator Eric Bieniemy, who Sowers will likely work under.

In addition to beating her and the 49ers to become Super Bowl champions last year, the Chiefs lost to the 2020-2021 champions, Tom Brady and the Tampa Bay Buccaneers, in February’s Super Bowl LV.

Sowers, 34, played professionally in the Women’s Football Alliance league, for the West Michigan Mayhem and the Kansas City Titans, before retiring in 2016 due to a hip injury. Upon her retirement, she got an internship with the Atlanta Falcons before moving to the San Francisco 49ers in 2017.

Before Sowers became famous as a football coach, she offered to coach the women’s basketball team at Goshen College, a private religious school in Indiana. Her offer was declined because she is gay.

She was only the second woman to coach in the NFL full-time, and the very first out coach, when she became an assistant offensive coach to the 49ers. In her third season with the team, the 49ers went to the Super Bowl. She left the team in January following the 2020-21 season when her contract ended.

Sowers added in a later post that for the Chiefs, “Pre-Season Week 1 happens to be vs. the Niners” at their home stadium, Levi’s Stadium, which she called home for four seasons.

“It will be weird coming out of the other tunnel but I can’t wait to get back out there.”