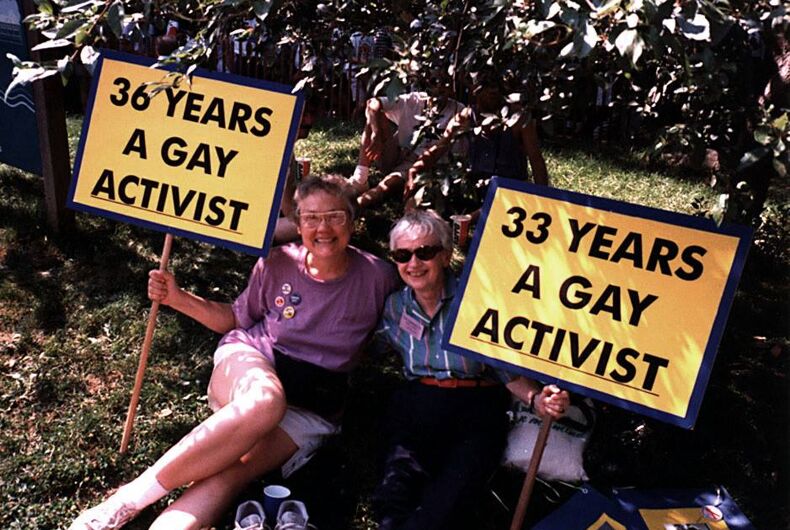 By the time of Barbara's death in 2007 they had been partners for 46 years.Photo: Courtesy Kay Lahusen

“Hellooo, Michael! It’s Kay!” For the last six years, that telephone greeting from gay rights pioneer Kay Lahusen has brought me joy at least once every couple of weeks; sometimes twice in one day; for she has been one of my heroes from the moment I became an activist nearly half a century ago. For many years, she used the name Kay Tobin because people had trouble pronouncing Lahusen. With her death this week at 91, there is no one left approaching her stature from this crucial time in our history. In my heart I kneel down.

We were introduced remotely by her friend David Carter, author of the definitive book on the Stonewall riots, after he spoke at the 2015 LGBT Veterans Day Observance next to the grave of my friend Leonard Matlovich in Congressional Cemetery in Washington, D.C., that I organized. The event included the dedication of a Veterans Administration cenotaph in memory of Leonard’s mentor, Kay’s longtime friend and comrade-in-arms, WWII veteran and, as David put it, the father of the modern gay rights movement Frank Kameny. Frank and I became friends after I moved to D.C. in 1977 and became one of Leonard’s roommates. She wanted to thank me for organizing the celebration, and we immediately bonded over our mutual love of the history of the fight for gay rights.

She was impressed by how much I knew of the contributions to the movement by her and her late partner of 46 years, Barbara Gittings, including that she had played a much larger role than Barbara’s more public image led people to believe. And that I am so afraid of something happening to my copy of her very rare 1972 paperback, The Gay Crusaders, that I take it with me whenever I travel. It was the first collection of interviews and biographies of the “men and women who are shaping America’s newest sexual revolution.”

Among the 15 profiled, partners Phyllis Lyon and Del Martin remain best known for cofounding America’s first lesbian group, the Daughters of Bilitis (DOB), in San Francisco in 1955. However, it was DOB’s magazine, The Ladder, that propelled the group’s positive message to lesbians around the world, particularly after Barbara and Kay took over producing the magazine in 1963. Kay wanted to change the name to A Lesbian Review but DOB’s board would only approve adding that as a subtitle so Barbara and Kay kept making the font larger.

In 1964, in addition to contributing articles, Kay brought the magazine’s covers themselves out of the closet, too. From its inception, only drawings or photos of women in shadows had appeared on the cover. But, first, with a donated photo of a woman from Indonesia, then with Kay’s own photos, lesbian women began showing their faces on its covers. And the next year, Kay, the world’s first out gay photojournalist, would begin documenting the movement’s growing militancy.

During our conversations all these decades later, she still marveled at how no one else was as interested as she was in photographing the early organized group protests (which many gays, including many DOB members, initially disapproved of – “only dirty, unwashed rabble do that”). The first Annual Reminder on July 4th, 1965, in front of Independence Hall in Philadelphia. July 31st, Barbara’s 33rd birthday at the Pentagon. The third picket of the White House that October 23rd. While Barbara joined Frank in organizing the protests, event after history-making event, year after year, Kay was there with her camera; often carrying a picket sign, too.

She and Barbara were close friends with Jack Nichols, cofounder with Frank of the independent Mattachine Society of Washington (MSW) in 1961, and his lover, Lige Clarke. Kay encouraged them to found GAY in 1969, the first biweekly community newspaper for which she contributed photos and articles.

“Estimates of the New York crowd varied from 5,000 to 10,000, with the higher figure being applied to the final, huge gathering for a Gay-In in Central Park. In addition, thousands of spectators lined the three mile parade route.” – Kay Tobin, GAY, July 20, 1970.

In December 1969, Kay was one of the cofounders of Gay Activists Alliance (GAA) and both photographed and participated in some of their “zaps” or surprise confrontations with public figures. She’s said to have been among those who pounded on the roof of the limousine of former Supreme Court Justice Arthur Goldberg, then running for New York governor, after he told them he had more important things to do than talk about gay rights. He eventually released a supportive statement.

She had been called a “fascist” by someone in the Gay Liberation Front simply for wearing a “Lindsay for Mayor” button. After his reelection, he became a frequent target of GAA, and Kay was one of those who zapped him. 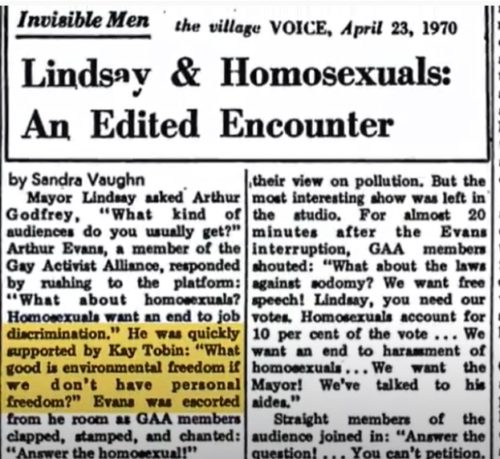 After years of other gay groups bowing to psychiatry’s insistence that being gay was a sickness in the hope it would at least gain their support for “tolerance,” MSW adopted an anti-sickness statement in 1965, declaring that homosexuality was just as good as heterosexuality. By 1971, Barbara and Frank were leaders of the movement to convince the American Psychiatric Association (APA) to remove homosexuality from its manual of mental disorders. Frank outraged APA convention attendees when he took over the microphone during a zap, trumpeting “Psychiatry is the enemy incarnate. Psychiatry has waged a relentless war of extermination against us. You may take this as a declaration of war against you.” He and Barbara also disrupted a convention lecture on aversion therapy and forced an exhibitor to stop selling aversion therapy slides.

At the 1972 convention, Barbara, Frank, and Kay set up their own exhibit called “Gay, Proud, and Healthy: The Homosexual Community Speaks” featuring photos of loving gay and lesbian couples by Kay. But what most rocked the attendees that year, and changed history, was entirely Kay’s idea.

Barbara and Frank had been invited to appear on a panel called “Psychiatry: Friend or Foe to Homosexuals – A Dialogue.” As Barbara recalled, “Kay said, ‘This isn’t right. You have two psychiatrists pitted against two gays. What you really need is someone who’s both.”

Several publicly closeted gay psychiatrists they approached refused, fearing estrangement from their straight colleagues and the loss of their careers. Finally Dr. John Fryer agreed to participate but only if he could be heavily disguised and use a voice-altering microphone. Kay’s photos document his bizarre appearance but his remarks moved many in the audience unlike anything else had. “I am a homosexual. I am a psychiatrist. Much like the black man with light skin, who chooses to live as a white man, we cannot be seen with our real friends, our real homosexual family, lest our secret be known, and our dooms sealed. . . .”

The next year, APA’s Board of Trustees voted to declare that homosexuality is not a sickness, and it was affirmed by a membership vote in 1974. The victory from which all other victories have flowed was the result of Kay insisting that we must speak for ourselves.

The years passed, honors and awards piled high, and the life partners became senior citizens while remaining activists. Unable to legally marry, they convinced AARP to give them a couple’s membership entitling them to less expensive health insurance. Barbara joked about opening a “Lavender Light Years Retirement Home” where residents would rock and ask each other, “Do you remember when we picketed the White House?”

After they moved into an assisted living facility shortly before Barbara’s death from cancer in 2007 despite years of excruciating chemotherapy, they came out to their new neighbors in the facility newsletter. While dependent upon an electric wheelchair to get around, Kay regularly hosted “the gay table” in the dining room which she crowned with her own small rainbow and American flags and shared with a handful of other out residents; something she deeply missed after the Covid-19 pandemic forced distancing from others and eating meals in her room.

Soon after our calls began she sent me an autographed copy of Tracy Baim’s biography of Barbara on which she collaborated and, of course, supplied photos. Two years ago an autographed copy of Love and Resistance: Out of the Closet into the Stonewall Era featuring photographs by her and Diana Davies arrived, and she was very eager for me to see the new documentary in which she appears, Cured, about the APA battle. Being shown at various film festivals and Pride events, it will be broadcast on PBS this fall. 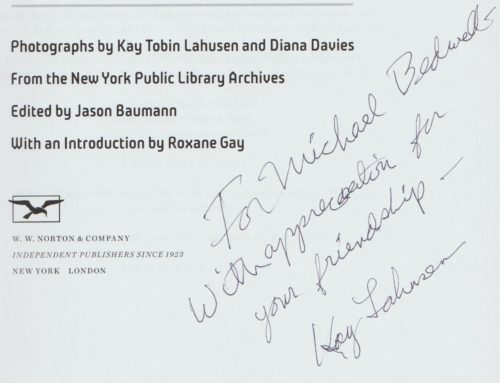 Repeatedly she urged me to decide where to donate my own movement memorabilia, and some of our last conversations were about her trying to decide which institution to leave the many remaining photos and documents and books which filled her room. Had she managed to frame the “Pete for President” t-shirt I sent her? Who will get that now, and the letter he sent her last year on her 90th birthday, and the Time magazine cover of him and Chasten she had taped to her door for all passers-by to see?

What amazed me from our first conversation – eight years after Barbara’s death and four years after Frank’s – through our last was how positive she remained, how engaged she was with current events – “Michael! What do you know about . . . ?” How humble she remained while praising others. How she could make us both laugh about something that happened the day before or sixty years ago.

I was about to mail her a small stained glass rainbow flag to hang in her window for Pride Month when I heard she’d passed. Now it will hang in my window and catch the light of my multi-hued memories of her. And I’ll watch yet again the video on YouTube of the 1968 Annual Reminder filmed by Lilli Vincenz that a Philadelphia TV station asked Kay to narrate in 2015, and I’ll still tear up at the point where she says, “That’s me” as her image appears on screen. As I did yesterday replaying some voice mails I’d saved. “Take care, Sweetheart, and call me back.”

And the next time I visit Leonard’s grave and Frank’s cenotaph I’ll put some flowers on Barbara and Kay’s memorial bench nearby where their ashes will finally rest together after Kay kept Barbara’s next to her bed all these years. “Gay is good” is the motto Frank coined in 1968, and being gay and lesbian and Bi and transgender is all the better today because of what these three did so many yesterdays ago.

.Remember your roots, your history, and the forebears’ shoulders on which you stand.