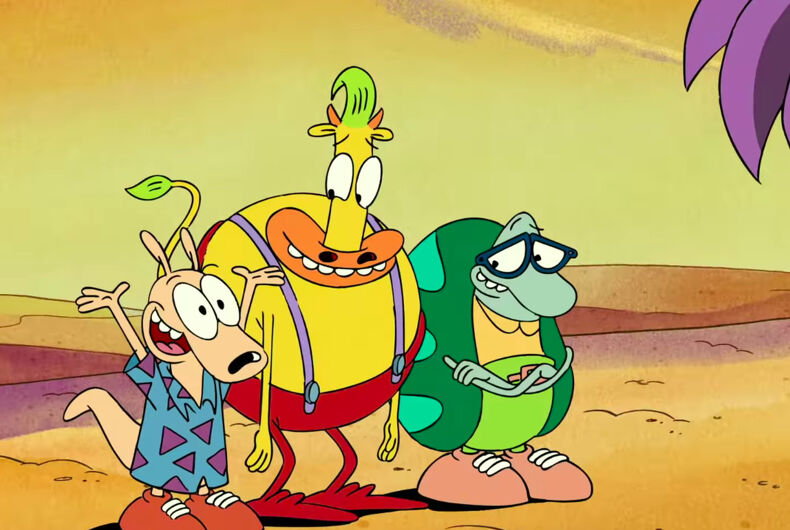 The show just happened to come along at a perfect time to test the boundaries of what animation could get away with and stands at a perfect dividing-line between jokes about Bugs Bunny in drag and more nuanced depictions of openly gay characters on TV.

Related: Everyone is freaking out over the Rugrats reboot because one of the moms is a lesbian now

Look back in time to the 1990s, and you’ll see Nickelodeon dominating the field of original animated shows with Rugrats, Doug, and Ren and Stimpy. Rocko’s Modern Life followed those hits and featured a cute little wallaby getting into silly scrapes with his animal friends, produced by many of the same people who would go on to create Spongebob Squarepants.

But take a closer look and you’ll find a groundbreaking queer metaphor in the 1996 episode “Closet Clown.” It starts with a clown and a duck driving through town and getting a flat in front of the home of the fussy Bigheads. Mr. Bighead is immediately hostile to the clown, demanding that he take his “freaky sideshow back to Scandinavia” — a reference that might seem strangely random today, but in the mid-90s Scandinavia would have been known for being home to the first countries to offer relationship recognition to same-sex couples.

The clown and duck scamper off, leaving behind some paraphernalia, and Mr. Bighead discovers that he has a strange attraction to a red honking nose. He can’t get it off his mind, but he also knows that there’s something taboo and forbidden about it, so he does his best to keep the nose secret from his wife and his coworkers. To his horror, his boss walks in on him clowning in a bathroom, but his horror turns to amazement when his boss reveals that he’s a clown too.

The comparison to gay life of the time isn’t hard to draw — discovering something thrilling about yourself, the shame of having to keep it secret, and then the excitement of learning that you’re not alone.

The boss insists that Bighead start clowning in public, which he does, reluctantly at first. But as time goes on, he realizes that it’s his calling. Disaster seems to strike when he shows up at a party in full clown regalia, only to find his wife and friends in attendance. Fortunately, they all accept him, acknowledging that everyone has secrets.

That a kids’ cartoon was willing to walk up to the line of acknowledging homosexuality in 1996 is pretty amazing. Animation, which was then primarily seen as a medium for kids, had always avoided the topic, with the exception of underground cartoons and un-dubbed anime. Rocko’s Modern Life was truly pushing a boundary with this episode, one that would only be advanced a few years later by adult cartoons like South Park, King of the Hill, and Daria.

But gradually, over the next two decades, animation would catch up with the rest of television. Series creators started talking more openly about gay characters on their shows — the creator of Gargoyles revealed that he thought of the character Lexington as gay, and the producer of Mystery Incorporated confirmed that Velma was a lesbian — and kids’ shows started including gay characters, like Mr. Ratburn on Arthur and Mr. Simmons on a Hey Arthur special.

And when Rocko’s Modern Life returned for a Netflix special in 2019, the show featured an openly trans character in a major role. The character Rachel talks about her transition, and in fact, that becomes a major plot point, helping Rocko to understand that while it can be hard to cope with change, accepting change is what makes his friends happy.

Series creator Joe Murray said in interviews that they worked with GLAAD to create Rachel’s storyline. And he also revealed that the “Closet Clown” episode in 1996 was explicitly meant to be a metaphor for coming out of the closet.

“It was intentional,” he said.

Of course, times being what they were, they could only hint at homosexuality. But now things are different, and our own modern lives make it possible for the existence of queer people to be acknowledged, rather than censored or joked about.

Turns out, modern life isn’t that bad after all.

Tennessee is telling LGBTQ people we aren’t welcome. It’s time we listened to what they’re saying.