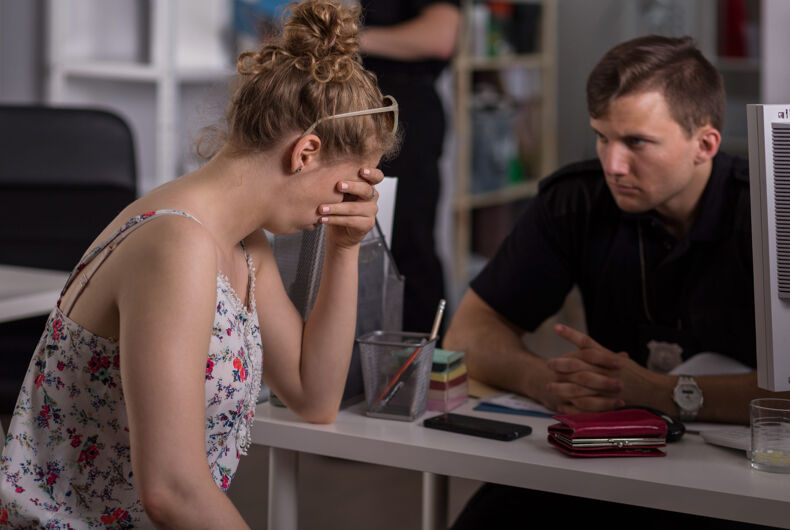 A woman who has accused a man of sexually assaulting her at a party in 2018 took the stand at his trial this week. The defendant, Keiran McNally, claims that they had consensual sex — but the woman said that she could not have consented because she was asleep – and she’s a lesbian.

During the defense’s shockingly homophobic questioning, she was asked if she was sure of her sexuality at the time of the alleged assault.

Related: 4 LGBTQ staffers fired from brewpub seeking “a change in culture.” Guess what they meant.

“Were you heterosexual at one stage and bisexual at another stage?” defense advocate Joe Barr asked her.

The woman reportedly didn’t understand “what heterosexual means,” so Barr asked again in a different way – if she “preferred boys” before. The woman indicated that she had previously been in the closet and believed she was straight.

“It’s not that I preferred boys, I just didn’t really know what I was,” she replied.

Barr then reportedly asked her if her friends at the party, and McNally, had “got it wrong” prior to the assault.

“Definitely,” she responded, “because he was told just before this incident,” referring to McNally.

McNally is on trial for sexual assault charges stemming from the June 24, 2018 incident in Linwood, a small neighborhood in west Renfrewshire, Scotland. Additionally, he is charged with failing to appear at a pre-trial hearing in 2019 related to the case.

McNally’s defense is that the woman consented and was “a willing participant in any sexual interaction” that happened, according to the Daily Record.

Barr asked the woman further about informing McNally of her sexuality, trying to get her to explain when she did so.

“It was three or four years ago, I can’t remember exactly when,” she responded.

When Barr suggested that she may just “think” she explained her sexuality to McNally, the woman answered, “I don’t think he would know [I was a lesbian]… he would know, because I told him.”

She denied cuddling or consensually kissing the McNally. Barr kept suggesting that the cuddling and kissing were consensual, which he said was witnessed by two people.

“That’s a lie. No, I never kissed him,” the woman responded.

Barr also asked about her drug and alcohol use, and if that impacted her judgment. She wasn’t sure if she consumed cocaine at the party, but she did confirm that she bought alcohol for the party.

The woman became distressed on the stand and asked for a break. The trial was adjourned and will reconvene to continue at the Paisley Sheriff Court today before Sheriff Tom McCartney.