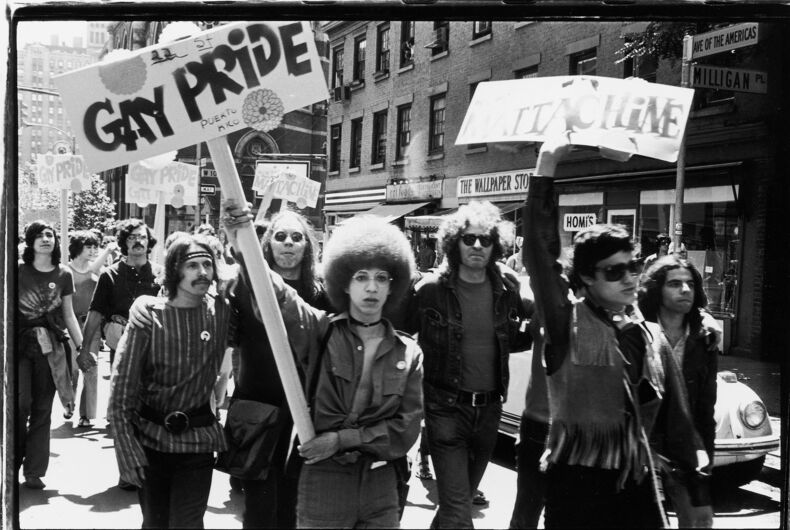 The 1969 Stonewall Riots triggered a powerful movement for political and legal equality, unleashing a tumultuous decade filled with protests and marches, including the first National March on Washington for Lesbian and Gay Rights in 1979.

The above photograph, taken June 28, 1970, depicts New York City marchers celebrating the first anniversary of the Stonewall Riots. What was then called the Christopher Street Liberation Day would come to be known worldwide as the first-ever Pride parade.

Throughout the decade, this movement steadily gained visibility and power. In 1973, homosexuality was removed from the American Psychiatric Association’s list of mental disorders, and in 1975, the first federal gay anti-discrimination bill was introduced, though it was never brought to a vote.

The late Harvey Milk also rose to prominence in the 1970s. In 1978, Milk became the first out gay man elected to public office in California when he was elected a San Francisco city supervisor. That same year, Milk was assassinated by disgruntled former city supervisor Dan White.

Milk, known for his fierce determination and for his ability to bring communities together across racial and sexual identities, left an indelible mark.

A charismatic leader and diligent organizer, he introduced San Francisco’s first gay rights ordinance, considered the most comprehensive in the country at the time.

Milk also played a pivotal role in the historic defeat of the 1978 Briggs Initiative, a law proposed by State Senator John Briggs that would have required that gay teachers (and any teachers who considered themselves allies) be fired.

Milk helped lead a massive campaign against the Briggs Initiative, with the help of other iconic grassroots organizers like Sally Gearhart, Gwenn Craig, and Bill Kraus.

In 1978, California citizens defeated the initiative by more than a million votes. This marked the first time in U.S. history an antigay law was rejected by voters.