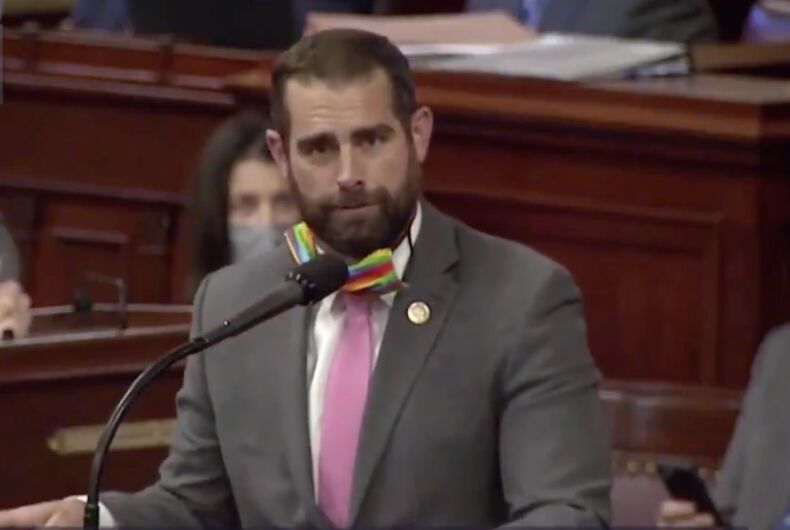 Pennsylvania Rep. Brian Sims (D) was out and about in Philadelphia recently when he ran into a familiar face.

Sims, who is currently running for Lieutenant Governor of Philadelphia, said he did a “double take” when he realized what he saw: “A perfectly normal, healthy, happy couple sitting in the sun enjoying each other’s company.” The couple was John and his husband Alan, who received a kidney that Sims donated.

Related: A bisexual man was banned from donating blood. So he donated a kidney instead.

Sims said he stopped to speak with Alan and John and “we all held back tears and just tried to enjoy the ‘normalcy’ of days that are truly a gift.”

A month after that encounter, as Sims would share on social media on May 13: “last night my parents came into town for the first time since my surgery last January and we had dinner with the recipient of my kidney and his husband.”

“Families come in all shapes and sizes,” Sims added. “Ours is pretty special.”

Sims revealed he was a living organ donor last year, when his colleagues ignited a COVID-19 scare when Republican members kept one of their peers’ positive result for the virus to themselves and put the lives of his peers at risk by continuing to be present at the Capitol instead of quarantining.

After posting a expletive-laden video on Facebook demanding resignations and investigations, Sims took to Twitter to explain how his life was at risk due to his peers’ reckless decisions.

In late January I secretly donated a kidney to a person who lives about 10 blocks from me in the City. He was dying of renal failure and I turned out to be a near perfect match. I spent several days in the hospital and several days with fifth a friend before returning home.

Now, months later, in the middle of a global pandemic, I’ve discovered that my Republican colleagues exposed me, and my Democratic colleagues to Covid-19! They covered that information up because they were simultaneously arguing that the risk was low, or non-existent. They lied.

“In late January I secretly donated a kidney to a person who lives about 10 blocks from me in the City,” Sims said. “He was dying of renal failure and I turned out to be a near perfect match. I spent several days in the hospital and several days with… a friend before returning home.”

Sims explained that he didn’t want to share his kidney donation as to avoid looking like he was taking advantage of it for political points. “None of this was ever supposed to be public. People are cynical, especially about politics. And so I decided to share the donation with only my friends, staff, and family,” he tweeted.

Since revealing his giving, though, Sims has added organ donation to the list of topics he’s unabashedly outspoken about. In January for Pennsylvania Donor Day, he post a video on Twitter encouraging his supporters to consider giving.

Other issues he’s known to talk about include protecting trans rights, reproductive freedom, and mental health. He hopes to bring them to the upper chamber in 2023 by winning the election for Lt. Governor, held next year.

“After 10 years in the State House, I’ve taken the lessons that my parents taught me and reinforced them in my work as a legislator: to take responsibility, commit to service, be courageous, and push for fairness,” he said while announcing his run.

As of this February, over 107,000 people are waiting to receive an organ at any given moment, the Health Resources & Services Administration (HRSA) reports. 39,000 people, including Sims, donated in 2020.

FAMILY: Last night my parents came into town for the first time since my surgery last January and we had dinner with the recipient of my kidney and his husband! Families come in all shapes and sizes. Ours is pretty special.

Last month I was walking through the city to my office and passed a table and did a double take. My recipient Alan and his husband John were sitting having lunch. A perfectly normal, healthy, happy couple sitting in the sun enjoying each other’s company. It was perfection!

Sims, responding to our sister site Queerty‘s reporting of his donation story, Sims once again used the opportunity of his latest update to stress the importance of organ donation. Despite the pandemic, he notes that “donation has never been safer or more needed.”

As the HRSA also pointed out, “one person donating can save up to 8 lives & living donors have a special opportunity to extend the lives of their loved ones and neighbors!”

Out athlete and writer Ryan K. Russell tweeted, “every time I feel overcome by the darkness of the world people like
[Sims] show me there’s just as much, if not more, light.”

Sims also touched on the importance of discussing how organ donation is possible despite the FDA and other organizations having previously banned or limited donation of blood from LGBTQ people, especially men who have sex with men.

Organ donations generally do not have such rules in place, because the FDA does not regulate that area. “A person’s sexual orientation, gender, gender identity or expression does NOT prevent that person from becoming an organ donor (deceased or living),” the non-profit Donate Life America reports in response to frequency asked questions on its website for LGBTQ people who may consider donating. (Some of the FDA’s rules relating to eye and tissue donation are in force with some organ procurement organizations they regulate, however.)

YOU CAN TOO! Well thank you, @Queerty! Donation has never been safer or more needed! One person donating can save up to 8 lives & living donors have a special opportunity to extend the lives of their loved ones and neighbors! Check out @DonateLife to learn more! https://t.co/iY3xkbbGKO

Every time I feel overcome by the darkness of the world people like @BrianSimsPA show me there’s just as much, if not more, light.

For many gay people, medicine, surgery, & organ donation have been steeped in the mystery & harm of the “gay blood ban.” Not only is it nice to hear about community supporting community, it’s also critically important for other gay people to learn that we’re able to donate.

Got to know this fella quite well when we were bouncers — only one of us looked like one (take a guess) — at Paradise in Lansing in the early 2000s. He always was selfless, looking out for others. It’s good to see some things haven’t changed. https://t.co/0U1ENzDdTd

Pride in Pictures 1970s: How the Stonewall Riots triggered a decade of activism