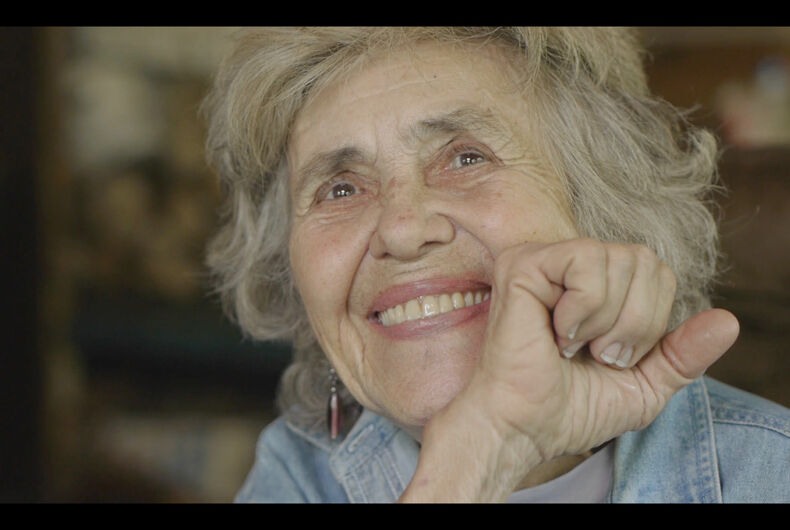 A still of Sally Gearhart from the 2018 documentary, “A Great Ride."Photo: Silvia Turchin

Filmmaker Deborah Craig was working on a documentary about lesbians and aging when she heard about an elderly lesbian who cut her own firewood with a chainsaw and lived in an all women’s community in Northern California. Craig knew she had to meet this woman, but she didn’t know just how much more there was to 89-year-old Sally Gearhart.

Gearhart, it turned out, was a key figure in both the LGBTQ and feminist movements of the 1970s and 1980s. Yet today, not many people know her name.

Related: Remembering when a San Francisco streetcar was dedicated to Harvey Milk

Now, in a documentary-in-progress called Sally, Craig is working to bring Gearhart out of the shadows and educate audiences about her incredible life as a radical lesbian feminist icon.

Among many other accomplishments, Gearhart fought a historic battle alongside Harvey Milk to defeat homophobic legislation in California, established one of the country’s first women and gender studies programs at San Francisco State University, and also wrote feminist science-fiction novels.

“At first, when I started this project, I was telling people that Sally is the lesbian Harvey Milk and everybody should know her because of that,” Craig told LGBTQ Nation, “but the more we look, the more of a complex, nuanced, interesting, charismatic, multifaceted, sometimes confusing and perplexing, and charming character she turns out to be.”

Gearhart’s charisma and charm made her a natural leader in the movement, and also makes for a fantastic documentary subject.

Currently, Craig and her team are relying on fundraising through a Kickstarter campaign to be able to complete the film. At the time of this interview, they had just reached their $40,000 goal and have now set their sights on $50,000.

“There is a hunger for Sally’s story,” said producer Jörg Fockele, “which is really really motivating for us.”

Both Fockele and Craig agreed that the film is both an ode to Gearhart’s legacy, as well as an exploration of how her work informs today’s social justice movements. Gearhart strongly believes in reaching out to those who disagree with her to understand their perspectives, which the filmmakers said is a key message for modern activists.

“We feel like we certainly want to restore Sally to her rightful place in the LGBT pantheon as someone who made a difference back in the day,” said Craig. “But we also feel that Sally has a message now that people hopefully are eager for and that is to fight for social justice, and have fun while you’re at it, to listen and learn from the people on the other side, to try to reach across the aisle…and boy do we need that now.”

The film will also explore the lesbian separatist movement, and Gearhart’s nuanced, complex brand of separatism, in which she believed that marginalized groups can both have their own spaces as well as work together.

“They are not mutually exclusive,” Fockele said. “As a matter of fact, they build on each other.”

“I never understood separatism as a lesbian or gay woman,” added Craig, “Now I have a better understanding of separatism after having met Sally and all her friends and seeing how it helped them liberate themselves.”

For the past thirty years or so, Gearhart has lived life out of the public eye, in a women’s-only community in the small town of Willits, California, where she has remained active in local causes.

It is not entirely clear, Craig and Fockele explained, whether Sally retreated because she was tired of the spotlight, or if she simply wanted to return to her small town roots and explore activism on a local level.

Either way, the film will also explore the toll it can take to be the face of a movement.

“There’s a price people pay for being in the spotlight the entire time,” said Fockele. “What does it do to someone to be elevated to this superhuman figure that inspires everybody? At the end of the day, they are still human beings who need to somehow navigate their personal lives, their romantic lives, everything else, and that’s where we feel like this is going to get really interesting.”