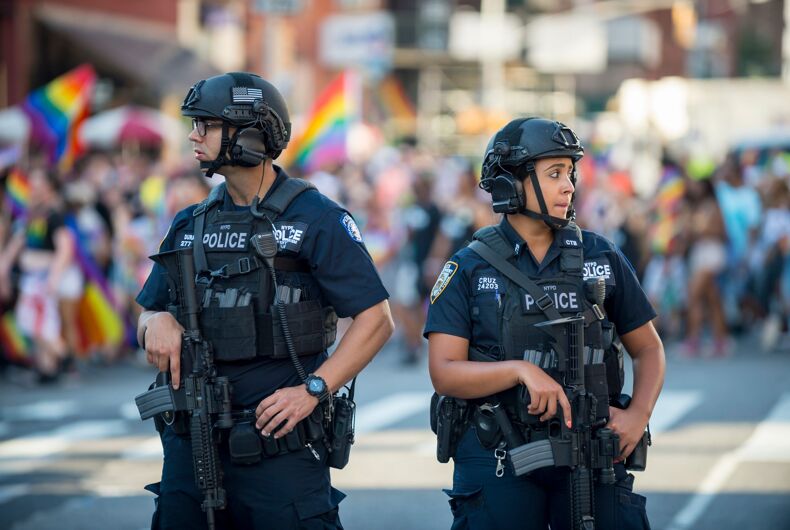 Heritage of Pride (HOP), the group that organizes New York City’s Pride festivities, announced last week that they had banned uniformed police officers from marching in the parade, spurring days of controversy led by the Gay Officers Action League (GOAL).

HOP members voted yesterday evening to reverse the decision and allow LGBTQ officers to march armed and in uniform. But the group’s Executive Board reversed the decision they announced late last night.

“By a 55-40% margin (5% abstaining), they voted to let GOAL march in uniform with concealed weapons but NOT to have an ‘NYPD’ contingent in the parade,” Humm wrote. “Andre Thomas, the co-chair, resigned as did some other people of color at the meeting who were left in tears.”

But by 1:30 a.m., the HOP board put out their own announcement to say they had reversed the reversal, saying they “voted to set a new policy regarding GOAL’s participation in an effort to be mindful and focus on our mission of creating safe space for marginalized communities.”

“It fell under our purview to do so, as elected representatives of this organization and we firmly believe that this decision is in the best interest of our community.”

The board said the officers “will not march armed and in police uniforms,” but that they were willing to discuss the possibility of the officers marching out of uniform and without deadly weapons.

GOAL publicly cited changes in NYPD policies in recent years as evidence of their advocacy, taking credit for having “had our hands in every police reform and policy revision touching on the LGBTQIA+ community in New York City.”

But as Black Lives Matter protests rocked the nation after the murder of numerous Black Americans, NYPD officers viciously attacked LGBTQ people – even outside of the Stonewall Inn.

The modern LGBTQ rights movement was launched after NYPD cops raided the bar and started arresting patrons and the queer community fought back. The group’s involvement has long been controversial considering their violent role in sparking the movement launched as a protest against police brutality.

Shortly before the 50th anniversary of the raid, after activist pressure and a declaration from NYC Pride organizers, the NYPD officially apologized in 2019 for the raid and years of violent persecution of LGBTQ people in the city. GOAL took credit for the apology in their statement deriding the decision to ban their participation.

For the last two years, “Reclaim Pride” has been a counter-event organized by the Reclaim Pride Coalition to hold a Pride celebration that doesn’t feature police, corporate, or politician involvement. The coalition recently announced that they will hold their third annual rally on the same day as HOP’s virtual event, marching in-person from Bryant Park in midtown Manhattan to Battery Park at the southern end of the borough.

At last year’s Reclaim Pride march, which protested police brutality in the wake of George Floyd’s death, marchers were pepper-sprayed and attacked with batons by NYPD officers allegedly covering their badge numbers.

“The NYPD, and policing across America, is fundamentally flawed,” the board said in their statement.

“LGBQ people are six times more likely to be stopped by the police. Nearly 3 out of 4 lethal anti-LGBT hate crimes [are] committed against transwomen and girls. Transgender individuals who survive violence are 3.7 times more likely to experience police violence compared to non-transgender survivors and 7 times more likely to experience physical violence when interacting with the police. Until 2021, trans people in New York could be arrested for wearing clothes that did not correspond with their sex assigned at birth. And after over 267 complaints related to abuse of force by NYPD when dealing with protesters, only two officers have faced serious disciplinary action.”

Editor’s Note: A sentence about a Black transgender man who was shot by police has been removed. The man was killed in Florida.

Ted Cruz roasted for saying military full of “pansies.” This guy wouldn’t defend his own wife.