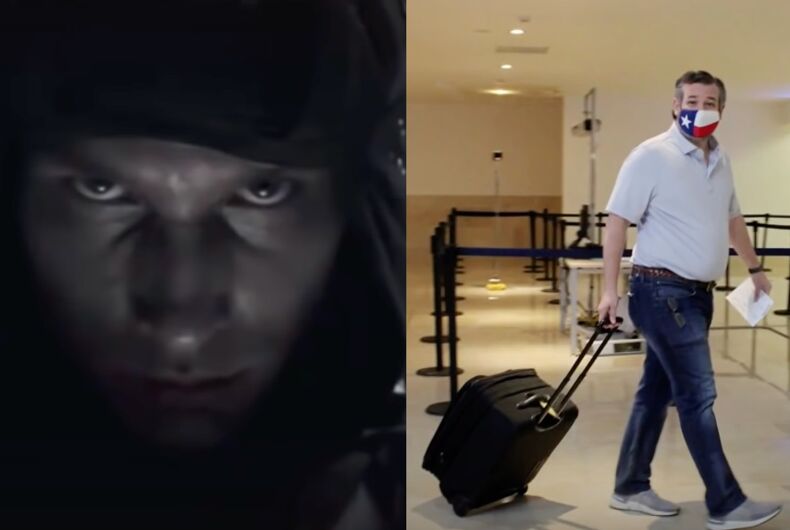 Sen. Ted Cruz (R-TX) is getting roasted online after he tweeted that the American military was turning “into pansies” and was becoming “woke” and “emasculated.”

Cruz ran against Donald Trump in the 2016 Republican primary election and Cruz lost. During the campaign, Trump made derogatory comments about Cruz’s wife, Heidi, but the senator still cozied up to Trump and became one of his staunchest supporters.

The senator tweeted a TikTok video that contrasts a Russian military propaganda video with an American Army ad.  The Russian video shows a shirtless, hyper-masculine soldier with a shaved head exercising, jumping out a plane, and staring down the scope of a gun.

The American ad highlights Cpl. Emma Malonelord, who was raised by lesbian moms. The Army says the ad highlights the “deeply emotional and diverse” lives of soldiers. They are meant to encourage people to join the military by undercutting preconceived notions about who would be welcome.

Perhaps a woke, emasculated military is not the best idea…. https://t.co/8aVFMW98NM

The blowback was swift.

Cruz tried to brush off the pointed replies, claiming “lefty blue checkmarks” are “losing their minds over this tweet.” But that didn’t stop the sharp replies that pointed out his cowardice.

Despite his claims of advocating bravery, Cruz infamously fled Texas for Mexico after the worst ice storm in the state’s history, leaving his constituents in the dark without heat.

Uh, no. We have the greatest military on earth, but Dem politicians & woke media are trying to turn them into pansies.

LMFAO, the guy who carried the balls of the asshole who called his wife UGLY is talking about "emasculated."

Maybe sit this one out, Fled Cruise.

Perhaps a U.S. Senator shouldn't suggest that the *Russian* military is better than the American military that protected him from an insurrection he helped foment? https://t.co/Ja3P78wnrv

That young soldier who you claim "emasculates" our military has more guts and strength of character on her worst day than you've ever had at your best.

The only boots Ted ever wore are what we call in Texas “Dime Store Cowboy boots”. Bought as part of a costume.
My boots started working cattle at 7 and later earned the others my 1st day at Boot Camp.
Ted’s all asshat and no cattle. (Ted’s a more pathetic version of Crenshaw)

Hello Senator Cruz, As a CEO, I can tell you that diversity and inclusion inside any organization is a huge competitive advantage. I know you may be fearful of it, but it's what we need to take us forward and solve the challenges of the future. ✌️

Editor’s Note: This story has been corrected. The presidential primary was in 2016 and not 2018. We regret the error.