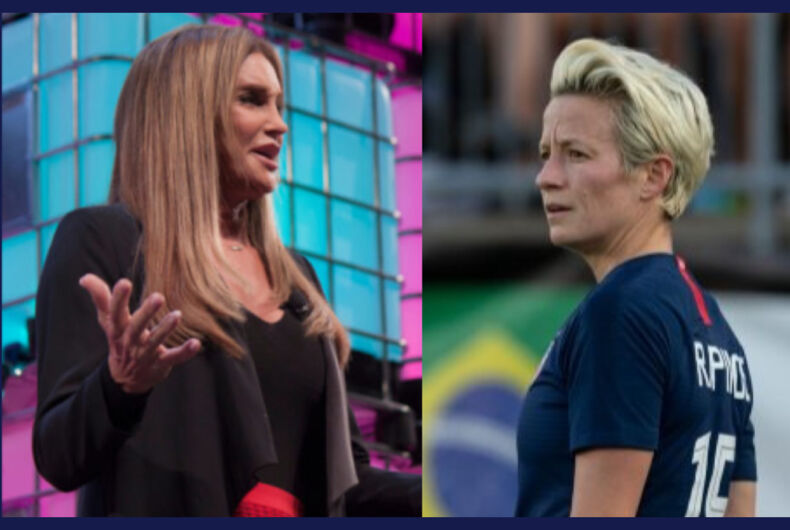 In an appearance on The Cooligans, an online podcast in the Fubo Sports Network, Megan Rapinoe commented on Caitlyn Jenner’s planned run for governor in California ahead of an anticipated recall election for Gov. Gavin Newsom (D).

“You were an exceptional athlete. You’re not an exceptional politician,” Rapinoe reportedly said in a shot at the former Olympian-turned-reality star.

The comments were first reported by Outsports, ahead of the out soccer star’s full appearance on the latest episode of the show, scheduled for release on May 9 at 7:00 PM EST. Clips of Rapinoe’s full comments on Jenner haven’t been released yet, but other parts of her sit-down have come out.

During the show, Rapinoe also commented on what it’s been like being a highly visible and admired woman athlete, discussed if she would ever consider being in politics, and remembered her days facing the ire of then-President Donald Trump (R).

Rapinoe reportedly told comedian-hosts Alexis Guerreros and Christian Polanco that politics require “a ton of skill and institutional knowledge,” but it’s become to much about “popularity.”

“Those people are talented politicians. I think people need to think of it that way,” Rapinoe said. “I love talking about politics from my perspective, from my lane. I honestly think It’s become too much of a popularity [contest].”

“Unless it’s [for] the president, and then probably, I’ll just do it.”

Recalling when she declared “I’m not going to the f**king White House” if she were to win the World Cup in 2019, Rapinoe said, “I’m petty, so to get to be the highest level of petty and win the game and score the goals, and ultimately win the World Cup, and just sit back and go, ‘oh, do you want to revisit that? Yeah. Are you talking about me? Oh, okay.'”

“It was all just so ridiculous in the moment. Like, you saw him totally unravel, right before our very eyes, especially to women who don’t back down.”

WHERE IS THE LIE?? 😅@mPinoe joins us this Sunday at 7pm ET on @fuboSports! Watch on the @fuboTV app or stream for free at https://t.co/dz9ITOeNTu pic.twitter.com/9zHSE3YkJK

Jenner, a former Olympian decathlete who became a Trump supporter shortly after coming out, is one of the best-known trans people in America, but she has been a lightning rod for criticism among LGBTQ people. She has made waves for her tactless comments and support for the Republican party while it relentlessly attacks the trans community.

Last month, she officially announced that she was running for governor of California as a Republican. She would be the first transgender governor in the U.S. if she wins.

Jenner did not announce any campaign stances or policy positions at first, until she said last week that she doesn’t think that transgender girls should be able to play school sports. Rapinoe has taken the opposite position, signing legal briefs in support of allowing trans youth to play sports according to their gender identity.