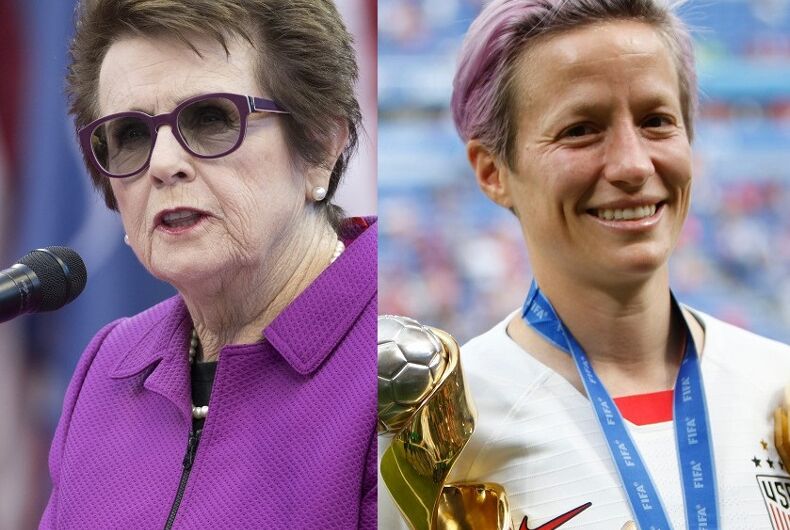 Megan Rapinoe, Billie Jean King, and 174 other female athletes signed an amicus brief in support of transgender girls and women playing sports as their gender identity.

“As women and LGBTQ+ athletes,” says their brief, they “submit that all youth deserve an equal opportunity to participate in sports alongside their peers. Such equal opportunity benefits the entire sports community.”

The brief was filed in Hecox v. Little, a lawsuit brought against the state of Idaho, which passed a law this year banning transgender girls and women from competing in school sports as girls and women.

The law also allows for a female student-athlete’s gender to be “challenged” and requires the athlete to undergo medical exams to “prove” it. A doctor, the law says, will have to examine the athlete’s genitalia, hormones, and DNA and make a determination of their gender, something that Democrats pointed out is not recommended by the American Academy of Pediatrics.

Boise State University athlete Lindsay Hecox, who is transgender, and the ACLU filed a federal lawsuit against Idaho Gov. Brad Little (R) to overturn the law.

And now she’s getting help from some of the most famous women in sports in the country.

Megan Rapinoe – who led the U.S. Soccer Women’s National team to victory at the 2019 Women’s World Cup in France and who was also Sports Illustrated‘s 2019 Sportsperson of the Year – signed the amicus brief filed in the case, along with tennis legend Billie Jean King, the winner of 39 Grand Slam titles in her career and the recipient of the Presidential Medal of Freedom in 2009.

The women “believe that every young person, and especially youth who are transgender, or intersex, should be able to participate fully in sport alongside their peers and gain the benefits that sports participation brings,” according to the brief.

“There is no place in any sport for discrimination of any kind. I am proud to support all transgender athletes who simply want the access and opportunity to compete in the sport they love,” wrote Billie Jean King. “The global athletic community grows stronger when we welcome and champion all athletes – including LGBTQI+ athletes.”

The brief stresses the value of sports, especially for students, when it comes to learning teamwork, managing stress, feeling acceptance and camaraderie, and getting experience with leadership.

“I was grateful that when I came out as a lesbian, I didn’t have to step away from the sport I loved,” said U.S. Women’s National Soccer team member and amicus brief signer Lori Lindsey. “I gained the tremendous gift of being fully myself and showing other LGBTQ+ athletes that there’s a place for them in sports.”

The brief also calls out the Idaho bill for its “invasive and medically unnecessary testing” if a girl’s or woman’s gender is challenged by a competitor.

“This law flies in the face of bedrock principles of equality and diversity in sports,” the brief says.

The Trump administration has also filed a brief in the case, defending the Idaho law by saying that it protects cisgender people from transgender athletes.