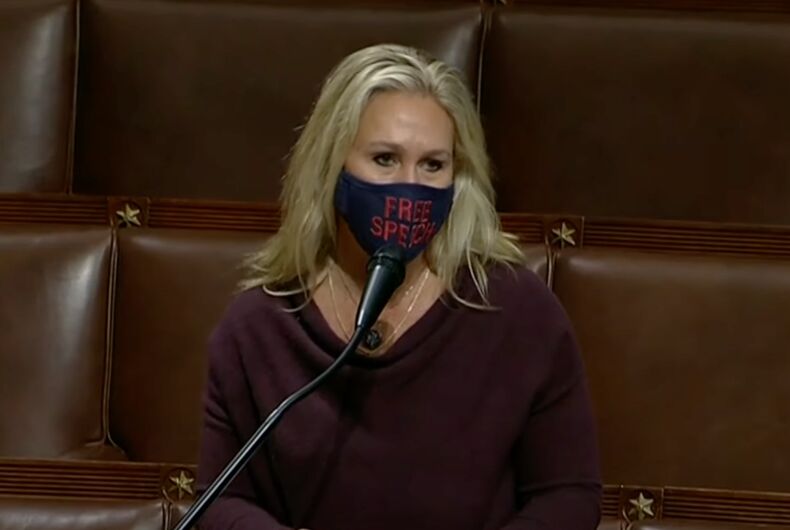 Republican leadership condemned Rep. Marjorie Taylor Greene (R-GA) for anti-semitic comments she made comparing wearing facemasks to the Holocaust, and she lashed back with a bizarre rant about how she needed to trivialize the Holocaust in order to stop critical race theory, socialism, and transgender equality.

“Vaccinated employees get a vaccination logo just like the Nazi’s forced Jewish people to wear a gold star,” Greene tweeted this morning. And over the weekend she said that the House’s mask mandate is like when Jews “were put in trains and taken to gas chambers in Nazi Germany.”

“Marjorie is wrong, and her intentional decision to compare the horrors of the Holocaust with wearing masks is appalling,” House Minority Leader Kevin McCarthy (R-CA) said in a statement. “The Holocaust is the greatest atrocity committed in history. The fact that this needs to be stated today is deeply troubling.”

This level of condemnation from her own party – which has spent months indulging her – led to her lashing back in an unhinged Twitter thread where she said that vaccines and mask mandates are “reminiscent of the great tyrants of history who did the same to those who would not comply.”

“And everyone feeding into it is allowing them to hide the truth, which is the disgusting anti-semitism within the Democrat Party,” she wrote.

Greene said that her colleagues don’t understand Democrats like she does, and then she listed a bunch of bogeymen that the far-right has been conjuring for the past year including “gender destruction,” a reference to transgender equality.

“The Democrats are the party of division, hate, critical race theory (pure racism), discrimination, totalitarianism, socialism, globalism, gender destruction, BDS, defunding our police, and ANTIFA/BLM terrorists,” she wrote. “I’m sorry some of my words make people uncomfortable, but this is what the American left is all about.”

Greene has a long history of anti-LGBTQ comments, and her career in politics started by protesting Drag Queen Story Hours.

The media and Democrats and everyone feeding into it is allowing them to hide the truth, which is the digusting anti-semitism within the Democrat Party.

3. it's never been more important than now to stand up against forced vaccinations and mask mandates that the left is using to discriminate against Americans who refuse to comply.

5. And everyone feeding into it is allowing them to hide the truth, which is the disgusting anti-semitism within the Democrat Party.

7. I'm sorry some of my words make people uncomfortable, but this is what the American left is all about.

And they are America last in every single way.