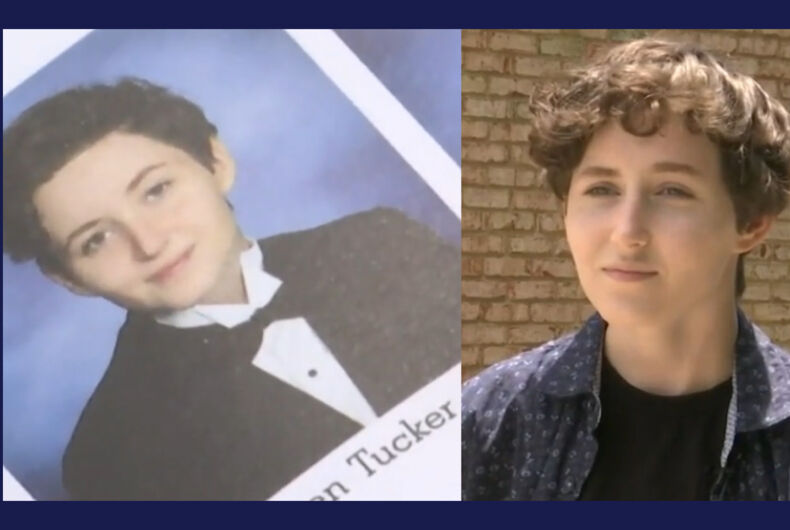 Transgender high school student Soren Tucker’s classmates are rallying to stop his school from deadnaming him at their upcoming graduation ceremony tomorrow, May 26.

“The goal is just for the administration and the graduation committee to say Soren’s name at graduation. We just want him to be able to be recognized for who he is,” Lily Smith, the school’s theatre co-president, said. She started a petition on Change.org to pressure the district to do the right thing.

Related: Church sends divorced lesbian a letter saying she’ll be shunned by community unless she “repents”

Soren Tucker’s graduation is supposed to be a moment of joy and celebration. But Alan C. Pope High School in Marietta, Georgia might make it a day to dread.

Despite using his name in class and in yearbooks and certificates, the school informed him that they will be using his legal name on the call list for graduation — meaning he and his peers will be hearing his deadname for the first time in years at the procession.

He says he “kind of forgot that it would be a problem” since he uses his real name all the time.

Tucker knew that the school would use his deadname on official documents like his diploma because it it still his legal name. He simply requested that when his turn comes during the graduation, the person announcing it say “Soren” instead of his former name.

“It’s who I am. This is how everybody knows me at my school,” he said about his request.

Unfortunately, the school counselor told him that the Cobb County school district is required to use his deadname because graduation is a legal event.

Tucker and his peers aren’t happy about that. The petition his classmates started has over 18,600 signatures.

Smith’s petition criticizes the school for claiming they are “only allowing ‘legal names’ on diplomas and on the call list for graduation (despite the call list being separate from the diplomas),” because that means “Soren and other transgender students will be publicly deadnamed as they walk across the stage to receive their diplomas, a moment they’ve waited their whole lives for.”

“Despite being fully supported and correctly recognized by students and staff, the administration refuses to recognize Soren by his name,” the petition says. “This is a BLATANT act of transphobia, and the students of Pope High School do not and will not stand for hate, prejudice, and discrimination against their students.”

Tucker wants to set the stage for future students not to face this issue.

“The more I thought about it, I know there will be people in future years, future graduating seniors that probably will have to go through something like this as well and I don’t want anybody to have to go through that,” he said.

Soren is a name that comes from his mother’s family, and he said he wants people to know that his decision to go by Soren “comes from knowing that something isn’t right,” and “it holds a lot more meaning than just a name. Transgender people just want to be regarded for who they really are.”

The school district is standing behind their claim that they’re legally required to use Tucker’s deadname. They refused interview requests but issued a statement, saying “for all official school business, our schools use our students’ legal names,” and that only changes if students legally change their name, which for minors in Georgia means filing a petition with a judge and waiting months for approval.

Soren, who just turned 18 this year, said he has started that process — but name changes for people over 18 in the Peach State still require at least four weeks of publishing a notice regarding the changed name, according to the National Center for Transgender Equality (NCTE).

Tucker told CBS46 Atlanta that he still plans to attend graduation but he’s not sure how he will feel or react if he has to hear his deadname.

“I’m just excited to kind of end this year and go on to new things,” he said.

Next year he’ll be going to Kennesaw State University within Georgia and majoring in theatre performance.

Pride in Pictures: Alison Bechdel parades through Vermont with her “nearly naked” partner