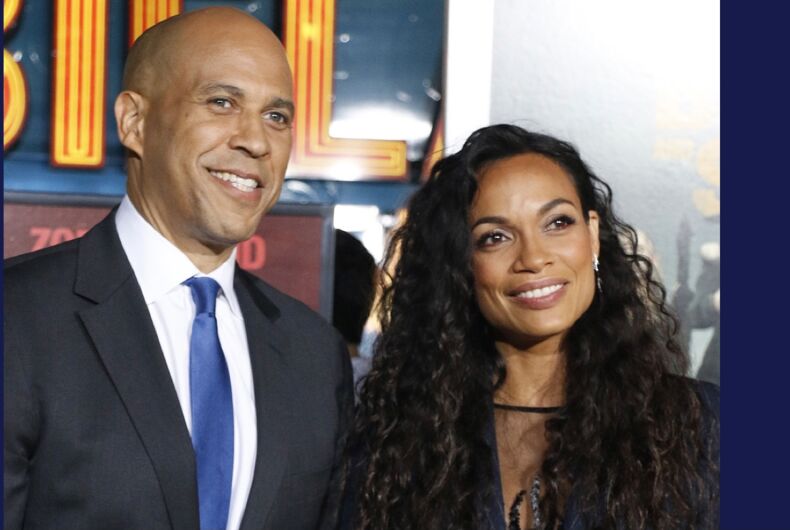 A judge has issued a full dismissal of Dedrek Finley’s lawsuit against Rosario Dawson, after Finley accused the actress and her family of denigrating and abusing him after he came out as trans.

Dawson, who publicly came out in February 2020, is currently dating former Presidential candidate and Sen. Cory Booker (D-NJ). This week, it was also revealed that the pair have moved in together.

Dawson currently plays Ahsoka Tano in the hit Star Wars series The Mandalorian. She voiced the character in a previous cartoon series that featured Tano, who is Anakin Skywalker’s apprentice, and she is slated to star in Ahsoka, a spin-off series focused on the character for Disney Plus expected for release in 2022.

It was shortly after Dawson’s casting as the character was announced that the lawsuit became public knowledge and sparked a controversy in late 2019.

Finley, who is a trans man, said that he knew Dawson’s family for decades, and in 2017 they convinced him to move to Los Angeles from New York City to do renovations on the family’s house. After moving west, he opened up to them about his transition.

In a lawsuit, he claims that Dawson continually referred to him with the wrong pronouns, even after being corrected. When he complained to Dawson about the misgendering, she allegedly responded, “You’re a grown woman,” and said, “Whatever.”

Finley was living on Dawson’s property in a separate house, but in April 2018, his hours were reduced and he alleged he was told he needed to move out. Dawson’s mother Isabel allegedly knocked on his door one day and got violent, ripping the screen on the door and pulling him through it to punch him.

Finley then alleged that Dawson pinned him down so her mother could keep on punching. He said he had video of Isabel threatening him earlier and he was going to call 911, but that Isabel stole his phone during the beating.

He said that he had to move out in September 2018 because the family shut off utilities to the house. He subsequently filed for a restraining order, and later sued Isabel and Rosario for assault, battery, trespassing, discrimination, civil rights, and labor violations.

By August 2020, Finley ultimately withdrew 18 of the 20 claims regarding the alleged misgendering and discrimination, but not two claims related to the physical altercation. His lawyer withdrew from the case, citing information he knew through attorney-client privilege.

Daweson broke her silence on the issue in November 2020. “I just want to say I understand that, and why people were concerned, and are concerned,” Dawson said in an interview with Vanity Fair. “I would be too if I heard some of those claims.”

She said that Finley retracted most of the claims – without settlement – “because they didn’t happen.”

“I was raised in a very inclusive and loving way, and that’s how I’ve lived my entire life,” she said. “The fact that this is coming from someone I’ve known since I was a teenager, the better part of my life, and who my family was trying to help as we have many times in the past, it really just makes me sad.”

“I still have a great empathy for him,” she added.

Now, Vanity Fair reported that last week the lawsuit “ended quietly and without public notice, with a full dismissal.”

After making clear his intent to move forward on the two claims he did not withdraw, Finley had to submit evidence in support of his claim. After the May 21 hearing reviewing the evidence, a Los Angeles Superior Court judge issued a ruling saying “the court hereby dismisses the action.” The ruling noted, “Finley did not file an opposition.”

“My family is pleased that this baseless suit is over,” Dawson said in a statement. She added that it was “heartbreaking” for her that “these false claims” had been alleged by “someone we’ve known as chosen family for decades and who we were trying so hard to help out.”

“Nevertheless, we have great empathy for him and have only ever wished him well,” her statement concluded.

My family is pleased that this baseless suit is over. While the vast majority of the false claims had been voluntarily withdrawn last year-including every single false claim of discrimination-the court has now terminated the remainder of the case allowing us all to move forward. https://t.co/mtru9yceCk

That these false claims came from someone we’ve known as chosen family for decades and who we were trying so hard to help out, as we have many times in the past, was very heartbreaking. Nevertheless, we have great empathy for him and have only ever wished him well.

Finley did not respond to requests to comment for Vanity Fair.

During much of the period this has transpired, Dawson has been the partner of Cory Booker, who in 2019 and 2020 was a political hopeful at the height of an intense primary for the Democratic Presidential nominee.

Now, as they have been together for over two years, Booker and Dawson have moved in together in Newark, New Jersey, she revealed in an interview with PEOPLE. Her dad, who is struggling with pancreatic cancer, helped her move cross-country in a RV. She recently played a dying mother in the film The Water Man.

Dawson clarified that she does identify as a member of the LGBTQ community in February 2020. While she did not say that she identifies as bisexual, that is the word used in the media to describe the way she talked about her sexuality.

She said that she has never dated anyone but men, which made her question her sexuality. “I’ve never had a relationship in that space, so it’s never felt like an authentic calling to me,” she admitted at the time.

Rosario Dawson is opening up about life in Jersey with boyfriend Senator Cory Booker in today's episode of the PEOPLE Every Day podcast. Listen & subscribe here: https://t.co/k1CzmPTWCS pic.twitter.com/KJvvvdsLin

.@rosariodawson Was 'Glad' Her Dad Was Able Help Her Move Across Country Amid His Cancer Battle #PEOPLEtheTVShow pic.twitter.com/d99SNtcrrW