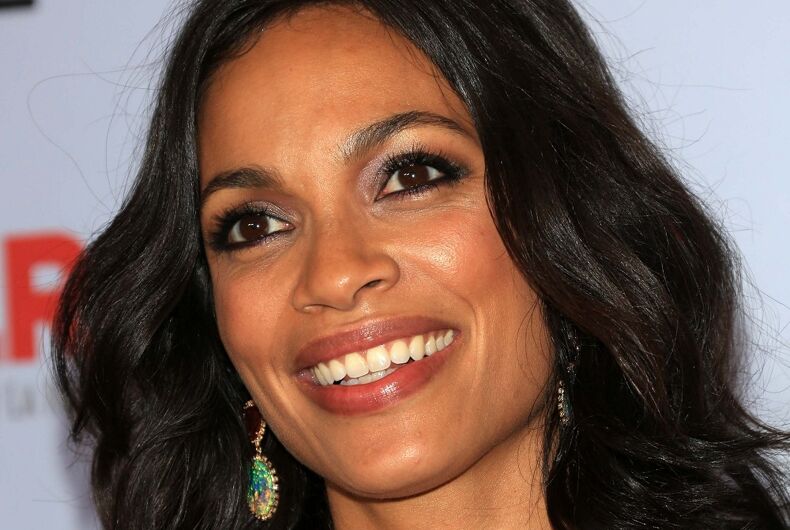 Mandalorian actor Rosario Dawson is speaking out publicly about an anti-transgender lawsuit filed against her by a former employee, denying that any discrimination occurred.

“I’ve always used my voice to fight for, lift up, and empower the LGBTQA community, and use my platform to channel trans voices,” she said.

Dedrek Finley is a transgender man who has been friends with Dawson’s family for decades and who moved to their home in Los Angeles to do renovations on their home. The arrangement went sour and last year he sued the family, accusing them of discrimination, misgendering, and assault.

“I just want to say I understand that, and why people were concerned, and are concerned,” Dawson said in a recent interview with Vanity Fair. “I would be too if I heard some of those claims.”

She said that Finley has already taken back most of the claims – court records show that 18 out of 20 claims were withdrawn without settlement – “because they didn’t happen.”

“I was raised in a very inclusive and loving way, and that’s how I’ve lived my entire life,” she said. “The fact that this is coming from someone I’ve known since I was a teenager, the better part of my life, and who my family was trying to help as we have many times in the past, it really just makes me sad.”

“I still have a great empathy for him.”

In a lawsuit, Finley claimed that Dawson repeatedly referred to him with the wrong pronouns, even after being corrected. When he complained to Dawson about the misgendering, she allegedly responded, “You’re a grown woman,” and said, “Whatever.”

Finley said that things got worse the next year. He was living on Dawson’s property in a separate house, but in April 2018, his hours were reduced and he was told he needed to move out.

Dawson’s mother Isabel allegedly knocked on his door one day and got violent, ripping the screen on the door and pulling him through it to punch him.

Finley said that Dawson then approached them, and instead of helping she pinned him down so her mother could keep on punching.

He also said that he had video of Isabel threatening him earlier and he was going to call 911, but that Isabel stole his phone during the beating.

He called 911 after escaping to the house and police responded. He had to be taken to the hospital for treatment, he says, and he got a restraining order against Isabel.

By September 2018, he moved out because, he said, the family shut off utilities to the house.

He sued in 2019, but by August 2020 he had dropped the claims about misgendering and discrimination. He did not drop two claims related to the physical altercation. His lawyer also left the case and Dawson’s family denied wrongdoing.

Dawson plays Ahsoka Tano in the hit Star Wars series. She voiced the character in a previous cartoon series that featured Ahsoka Tano, Anakin Skywalker’s apprentice. Her appearance in the last episode was the first time the character was seen in a live-action production.