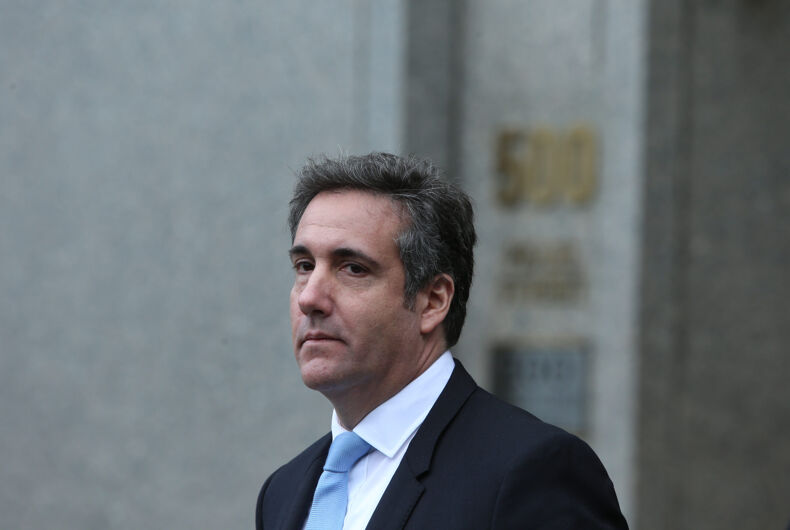 Cohen shared his belief that Trump “doesn’t care if you’re LGBTQ, ’cause you don’t mean anything to him,” and “he’s basically repulsed by the community.” He then shared a story where Trump remarked that he knew someone who “hates” having a gay son.

First, Cohen details his run-ins while taking a walk (allowed under the restrictions of his home confinement sentence) when he was verbally accosted by a Trump supporter in Central Park. He brushed it off at first, but then the same woman would approach him a few days later in the park.

“Next thing I know, right back into my face is this lady again, her second time… this time I was listening to ‘Bohemian Rhapsody’,” Cohen recalled. The Queen song spurred Cohen to respond to the woman’s curses and negative remarks, and recorded her tirade.

“This is typical of what Trump does to people,” Cohen remarked. “It’s almost like she became empowered to act a complete asshole.”

He added, “[she] interfered with Queen, and that’s just unacceptable.”

Podcast co-host Shannyn Moore remarked, “Virtually everything you have predicted over the last couple of years has come true. You’re sort of a Nostradamus on all things Trump-y.” The host ask Cohen what he thinks will happen next to Trump and his associates, with New York City opening a criminal-investigative grand jury investigating the business activity of Trump.

On Trump’s predecessor, Cohen said that “Barack Obama is a thorn in Trump’s large ass. There is no other way to put it.” He cites Obama’s race, intelligence, and the fact “he is really universally loved.”

Cohen cites a time Trump apparently told him, “Oh, you know, ‘a friend of mine has a son, who’s gay, and you know, he’s really rich… his father hates it.'”

“So it’s not true. I happen to know the family. The father doesn’t hate it,” Cohen remarked. “Now, would the father prefer him to be, you know, heterosexual? I don’t know. I never asked him… maybe yes, no, I don’t know. It’s none of my business, it’s between them. But Trump then puts himself into the dead center.”

“He doesn’t care if you’re LGBTQ, ’cause you don’t mean anything to him. That’s the problem, the man lacks any relationships. I mean, it’s why Donald Trump has no friends.”

He then compares how Obama used to have friends from college and his pre-Presidential days that would visit him and be welcomed at the White House, to how Trump didn’t have any friends or people he welcomed. “People say to me, ‘I’m a friend of Donald Trump,'” Cohen said, to which he replied, “I know you’re lying.”

Cohen then expressed that while he wasn’t completely ignorant about Trump prior to working for him in 2007 —when he was the face of the top reality show on network television, The Apprentice, and half-owner of Miss Universe — he didn’t foresee what he would become and how his Presidential administration would turn out to become.

He stressed how he didn’t . “Yeah, I worked for a monster,” Cohen admitted.

“My wife, my children begged me, begged me not to take the job… they begged me to quit,” he recalled, admitting that Trump was “disrespectful to my daughter” in front of him. He still didn’t have the wherewithal to quit.

“I almost felt guilty… it’s weird: the cult of Trump is a cult. Plain and simple, he’s no different than any other cult leader, and he is the Jim Jones.”

Cohen then said he believes Trump will be indicted after that, before summer. That will be the “first time in his entire life” that he will be held responsible “for his dirty deed,” remarked Cohen.

Cohen said he believes Trump will face a “hybrid” form of punishment from the judicial system as opposed to a prison sentence, as sending a former President to jail is unprecedented and could cause complex issues, such as with Secret Service protection and sensitive national security information.

Here’s just some of the nonsense that conservatives blame Joe Biden for. So far.