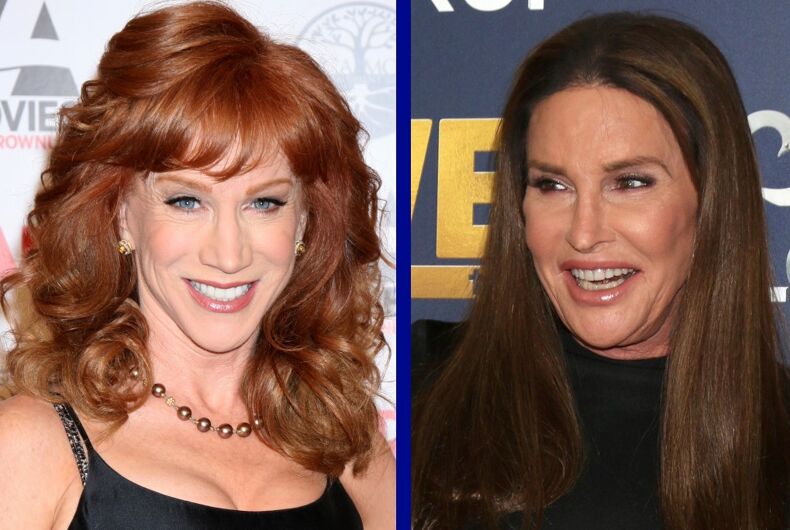 Kathy Griffin and many others are ruthlessly mocking Caitlyn Jenner’s wild interview with Sean Hannity, where she talked about her opposition to trans equality while wanting to be a “role model” for trans people and her support for Donald Trump.

But Jenner drew the sharpest criticism for saying that she’s running for governor of California in part because “the guy right across” from her airplane hangar “was packing up his hangar” and moving to Arizona because he’s tired of seeing homeless people.

“When you lost the private airplane hanger crowd…” Griffin quipped.

“In fairness, fewer people get killed when Caitlyn flies a private plane in the sky than when she drives an expensive car (while texting) on the road,” comedian Betty Bowers replied. Jenner was involved in a four-car pile-up in Malibu in 2015 that killed one person. She never faced criminal charges, but she did pay $800,000 to settle a civil suit against her. She was accused of texting while driving, an accusation she denied.

In fairness, fewer people get killed when Caitlyn flies a private plane in the sky than when she drives an expensive car (while texting) on the road.

Bowers had a few more jokes about the interview.

"The Republican Party is the party of the working class."

"OMG! It's horrible how many icky homeless people are near my private plane hangar!"

Others mocked her for how much she stressed that she’s rich, despite her criticism of Gov. Gavin Newsom (D) – in whose recall election she’s running as a Republican – for being “elitist.”

Why are the poors ruining my view for me? https://t.co/JvGMz2vtbA

This is the "let them eat cake" of our generation #CaitlynJenner https://t.co/hVb6XO8SDW

I can't believe the guy with the hangar across from Caitlyn Jenner had to pack up his own hangar. I mean, talk about adding insult to injury. First, he has to see homeless people and, then, for some reason, he has to do work for himself??? It's an outrage, I tell you.

“Caitlyn Jenner went on Sean Hannity during her campaign for governor and said that her private plane friends are leaving California because they’re sick of seeing homeless people” is something that you would think would be a joke but naur, it’s true, it’s true.

Others criticized her stance on transgender issues. Jenner would be the first transgender governor in the U.S. if she wins the election, and she said that she wants to be a “role model” for transgender people.

But she also stressed that she supports banning trans girls from competing in school sports and even said that it’s OK to misgender her because her mother sometimes does.

Not that I expect her to care but 1 in 3 trans people have been homeless in their lifetime. 1 in 8 experienced homelessness in the last year; 75% of them who stayed in shelters were harassed because they are trans. https://t.co/ELiyZ3jbfz

Some people were just there for her general incompetence.

I would describe Caitlyn Jenner’s campaign as a car crash but that seems redundant.

caitlyn jenner's campaign for governor is off to a good start https://t.co/c0fFbAFDxP

She did get some support from some on the right. Fox News personality Kayleigh McEnany opposes LGBTQ equality and was the White House Press Secretary under Donald Trump. She said that Jenner was “well-informed, sincere, and laser-focused on undoing the socialist, radical, a-scientific policies of Biden & the left.”

I found Caitlyn to be well-informed, sincere, and laser-focused on undoing the socialist, radical, a-scientific policies of Biden & the left.

Unfortunately for Jenner, McEnany is currently moving from Florida to New York and therefore cannot vote for her.

I’m vaccinated. Can I go to Pride now?