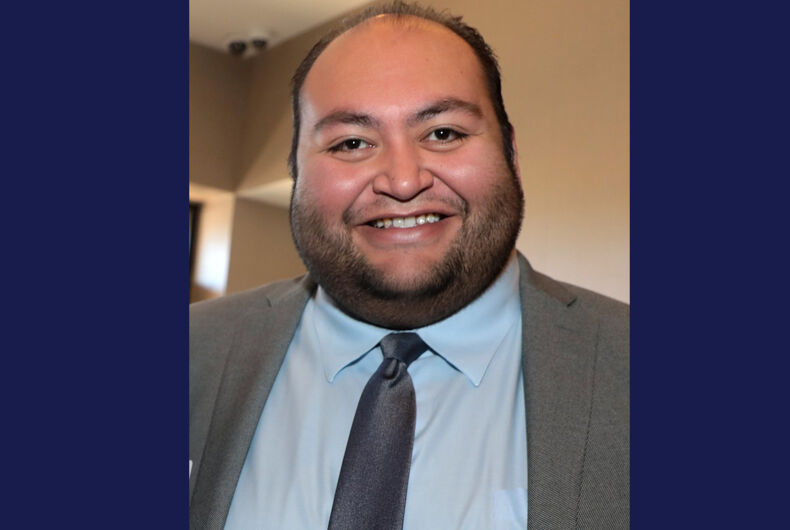 On January 8, 2011, Daniel Hernandez was just another congressional intern, working his fifth day for then-Rep. Gabrielle Giffords (D) at a public event in Arizona. In less than a few minutes, that all changed. Giffords suffered a bullet wound to the head as a gunman fired upon the unsuspecting crowd.

Hernandez saved Giffords’s life, and now, 10 years later, he is running for Congress.

“While interning for Gabby Giffords, I was working at her meet and greet when she was shot,” Hernandez recently tweeted. “Those nine minutes, between the first shots fired and the moment the first responders entered the scene, I ran to Gabby, kept her awake, and did what I could to take care of her.”

Those nine minutes proved crucial. He applied pressure to the wound, preventing more loss of blood, and monitored her breathing. The fact that Hernandez, who is gay, was nearby and able to react quickly was determined by many to have saved Giffords’s life.

Hernandez would state in the aftermath, “I don’t think I’m a hero—the heroes are people who spend their entire lives trying to help others.” Yet he was celebrated across the country, including in the Arizona State Capitol as a guest of then-Gov. Jan Brewer (R) and at the State of the Union by President Barack Obama (D).

“Daniel? I am sorry, you may deny it, but you are a hero. We have decided you are a hero because you ran through the chaos to minister to your boss, and helped keep her alive,” President Obama said to him, accompanied by cheers from the crowd.

Equality Forum presented Hernandez with the 2011 National Hero Award, and LGBTQ Nation  deemed Hernandez our Person of the Year in 2011.

Hernandez, a self-described “Karaoke and Drag Aficionado,” is the son of a Mexican immigrant and first-generation Hispanic American. He worked on Hillary Clinton’s presidential campaign in 2008, as well as Giffords’ first re-election campaign that same year–all before his freshman year studying political science at the University of Arizona.

While attending college, Hernandez served as a campaign manager for State Representative Steve Farley, who became the minority leader in the Arizona State House. He then went on to serve as an intern for Rep. Giffords. After the shooting, he served on the Sunnyside Unified School District school board.

After years of advocacy, he ran for state representative in 2016 for the second district of Arizona and beat the incumbent conservative. He’s retained his seat since, and he also co-founded the Arizona House LGBTQ caucus.

Now, he seeks to become one of the handful of out LGBTQ people to serve in the United States Congress. He officially announced his campaign on May 20. The seat is currently held by Rep. Ann Kirkpatrick (D), who is retiring.

I’m excited to announce today that I am running for Congress in #AZ02!

I’m a son, a brother, and a bilingual kid from Tucson. I’ve been a nurse’s assistant, a campaign organizer, a school board president, and a state legislator. When I see a problem, I get to work to fix it. 🧵

In an interview with the Advocate, Hernandez said he’s “really excited” for his latest campaign.

“I’ve grown up in southern Arizona, where I was born and raised. I’ve always wanted to help, since the age of 5…Ten years ago, with the shooting, it cemented my desire to go into public service. I want to get to D.C. to help the community I represent already and then the rest of southern Arizona.”

He added, “I’m one of those weirdos who loves working with people even when I don’t always agree with them. I’ve been able to get stuff done in the legislature and will hopefully be able to do great things in D.C.”

He named healthcare access, enforcement of non-discrimination laws, and economy protection as his priorities if he were sent to Washington.

One of his primary opponents is state Rep. Randy Friese (D) — the trauma surgeon who operated on Giffords and others injured in the shooting.

I’m running for Congress to ensure Southern AZ continues to have leaders like @GabbyGiffords and @RepKirkpatrick. We need someone who will shut up, listen, and get to work. I hope you will join me and contribute whatever you can today.https://t.co/h8HKRPN3Tl

Jared Lee Loughner was later charged with, and pled guilty to, committing the shooting. In addition to shooting and nearly killing Giffords, he killed six other people and injured 13. Among the slain were U.S. District Judge John Roll, Giffords’s aide and Hernandez’s co-worker Gabriel Zimmerman, and Christina Greene, a nine year old who was born on 9/11.

Loughner, 22 years old at the time of the shooting, is currently serving a life sentence — plus 140 years — in federal prison in Minnesota.

Giffords was a supporter of LGBTQ rights and a founding member of the LGBT Equality Caucus during her four years in office. She resigned after the shooting, a year into her third term, to focus on her recovery. She has since returned to the public eye to advocate for gun control and LGBTQ rights.

We still need your help can you chip in $5 dollars right now? https://t.co/h8HKRPN3Tl pic.twitter.com/FkzuJfqXzm

Daniel Hernandez, former Gabby Giffords intern who helped save her life after she was critically wounded in a 2011 shooting is running to represent her old Arizona district in Congress https://t.co/jMyMtYGosG

Pride in Pictures 2000s: The battle for marriage equality