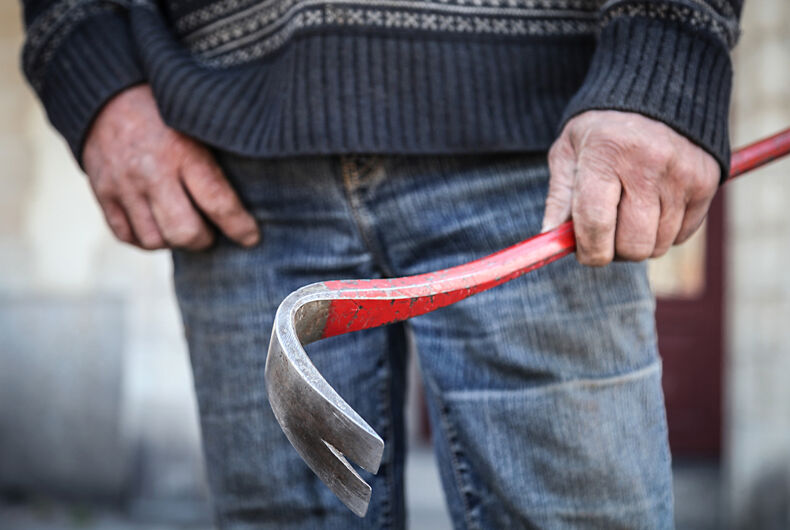 A residence hall space specifically for LGBTQ students at a central Pennsylvania college was attacked by over a dozen angry fraternity brothers.

“As the residential advisor of the affinity house and a member of the LGBTQ+ community, I want you to imagine what it felt like to be studying one minute, and then locking down all possible entrances the next,” Tyler Luong, the adviser on duty that night, reported to the college.

The residence hall in question is Fran’s House, a gender-neutral hall for  LGBTQ residents of Bucknell University, a private liberal arts school in Lewisburg, Pennsylvania.

Fran’s House is one of 12 affinity houses at Bucknell, meaning they are organized based on common interests or identities. It is named for the late director of Bucknell University’s Office of LGBT Awareness, Fran A. McDaniel.

The residence hall offers gender-neutral, LGBTQ-friendly housing, and also events for non-residents, as “the center of student life for our LGBTQ student community.” It is housed in the former TKE resident building.

Bucknell has several fraternities and sororities, but TKE is no longer officially recognized at the school. The national TKE organization has considered Bucknell’s chapter “inactive” since, but what Luong witnessed on May 13 suggests otherwise.

Luong told his school that “the residents of Fran’s House were locking our windows and securing our doors from nearly 20 former Tau Kappa Epsilon members from breaking into our home.”

When their attempt to enter the building was rebuffed, the frat boys started “swinging a metal bar at our flag pole that displays our pride flag, and urinating on our front porch.” They shouted repeatedly, “This isn’t your home… this is our home!”

“They FLASHED one of my residents,” Luong recounted.

To add to the horrifying ordeal, Luong said he did not get assistance from Bucknell’s public safety officers. In fact, he reported that public safety provided the opposite to the LGBTQ residents.

“When Public Safety arrived, they laughed at the situation,” he reported in the letter addressed to the school’s president, John C. Bravman. “President Bravman, the officers bonded with our offenders, reminiscing their college days and calling them handsome young men.”

“President Bravman, the officer offered them their business card,” Luong wrote. “I had to ask TWICE to get one because the officer was too busy laughing with our offenders. Is it within the policy for Public Safety to completely ignore the ones who reported the crime?”

Luong stressed that “the two officers didn’t even speak to me. Neither of the two officers came up to us Fran’s House residents to ask if we were okay.” He then said that they “shook hands” with them, “promised” to talk to their boss — the chief of public safety, Steve Barilnar — to get the students “access to our house when final[s] week was over.”

“Is it within the policy for Public Safety to completely ignore the ones who reported the crime?” Luong asked.

TKE was banned at Bucknell for repeated “ritual hazing incidents and under age consumption of alcohol,” according to the Blade. In 2019, a former member of the fraternity was charged with rape for an incident that happened in the fraternity’s home.

On May 14, President Bravman, Provost Elisabeth Mermann-Jozwiak, and Assistant Provost Nikki Young issued a statement responding to the “horrific incident” of the day before, and ” to state our unequivocal support for all LGBTQ Bucknellians.”

They wrote, “We are both outraged and sorrowful that the residents endured this violation of the space that is so critically important to them as a community. These actions will not be tolerated.”

They added that they will “implement additional educational and professional development for Public Safety officers to foster a better sense of safety and belonging for all members of the Bucknell community.

“We cannot erase the ugliness and subsequent trauma of last night’s transgression against the students of Fran’s House and, implicitly, many others, but we can commit to addressing it in a way that protects LGBTQ Bucknellians and better ensures their safety in the future,” the officials stated.

Students at Fran’s House issued an open letter after shared by the school’s office of LGBTQ Resources, demanding that “the Public Safety officers and the individuals involved in the incident… be held accountable for their actions.”

“What happened to this house is abhorrent,” they added. “Appropriate actions must be taken by the Bucknell Administration to ensure nothing like this will ever happen again. Fran’s House residents will provide full compliance to the independent investigation occurring, and hope we will be adequately represented when the university makes decisions based on this outcome.”

When contacted by the Washington Post, Bucknell’s public safety referred to a school spokesman who declined to comment. Fran’s House members also declined comment beyond the open letter, citing final exams and feeling “overwhelmed” by the attack.”

College campuses are becoming a growing site of hate-fueled incidents. According to National Center of Education, over 154 incidents on campuses have been motivated by hatred or bias on the basis of sexual orientation, which accounted for 16 percent of the reported hate crimes as of 2017.

A post shared by Office of LGBTQ Resources (@queer_bucknell)

A post shared by Office of LGBTQ Resources (@queer_bucknell)

Lil Nas X’s new song comes out Friday. Here’s what we know about “Sun Goes Down.”