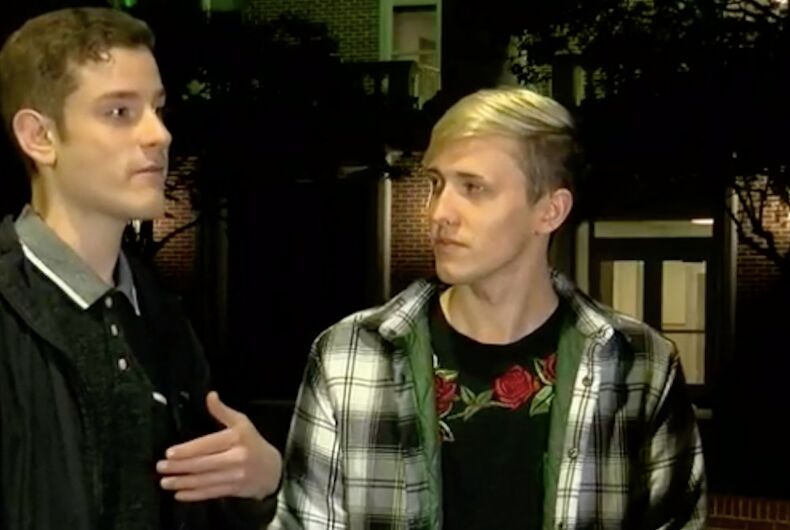 Two University of Memphis students — Benjamin Buckley and Luke Chapman — say they were threatened and kicked out of an off-campus fraternity party for being gay. The university is now investigating the incident.

The local NBC affiliate WMC 5 reports several male students forcibly ejected them from the party, shoving them out into the rain while shouting “You don’t belong here, faggot.”

Related: Students are fighting a nonexistent gay club because it will “push homosexuality” on them

Another reportedly told Chapman, a senior exchange student from the U.K., “Go back to Great Britain, faggot.”

The two students left with their friends. Later that night, Chapman wrote about the incident on Facebook.  In the post, he wrote:

If you all really want to know what its like being gay in the South of America, it’s awful. It really is fully of hatred and pure homophobia, people at home may be perceived as bad but here everyone is truly dead set against you.

When the institution of study agrees with the people that physically threw you out, when the police in your area agree with the idea that homophobia is safe and a good practice who do you go to? Where do you go, when you’re physically thrown out of a place you’ve paid to enter and you’re sworn at and chucked out, what do you do? When the University of Memphis pays money towards this practice and you turn up to class supporting this, and aid this behavior, who do you go to? What do we do? This is being gay in this south and there is no help, and there is no one….

“That [following] morning,” Chapman said, “I think I had so many messages of support and so many people messaging me offering to help.” His post has since received 93 comments and 19 shares.

A letter to students from University of Memphis President Dr. David Rudd promised an investigation into the incident and reminded students, “One of our core values is diversity and inclusion. The University of Memphis is a community where everyone is respected, included and given the opportunity to excel. This is a value we embrace with conviction.”

The university of Memphis has just over 20,500 students and 16 fraternities in its Greek system.