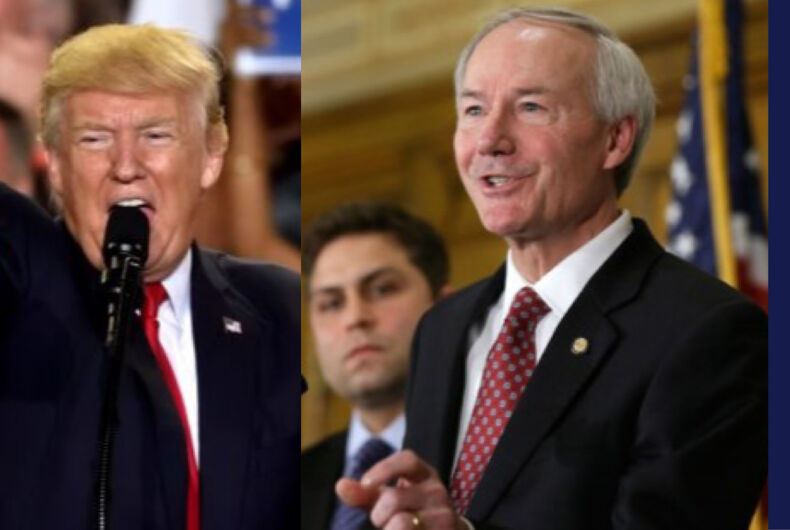 Arkansas Gov. Asa Hutchinson’s (R) veto of an anti-trans proposal called “the single most extreme anti-trans law to ever pass through a state legislature” led to a lot of criticism from conservatives, despite the fact that he’s signed two other anti-LGBTQ proposals into law.

Yesterday, former President Donald Trump joined in on the pile on, releasing a statement from the “Office of the Former President” that attempted to insult Hutchinson as a “lightweight”  and “RINO,” or “Republican in Name Only.”

Trump has increasingly waded back into making public statements in the last few weeks after his initial period of silence following his dramatic exit from the White House. He also released short statements in the last week denying reports that he was asked to pardon Rep. Matt Gaetz (R), and endorsing some of his more stringent allies such as Sen. Rand Paul (R-TX).

Hutchinson is a former ally of Trump, but publicly distanced himself from the then-President following the storming of the U.S. Capitol on January 6 by an insurrectionist mob of Trump supporters. In February, he said that he would not support a 2024 campaign for Trump.

Trump “should not define our future. We have got to define it for ourselves,” he said on CNN.

Now Trump is taking the opportunity to fire back while Hutchinson is being heavily criticized for vetoing House Bill 1570 last week. 24 hours after he issued his veto, both chambers of the Arkansas General Assembly voted to override his veto and implement the proposal into law.

H.B. 1570 bans gender-affirming care of any kind from being given or even offered for consideration to trans youth. That includes surgery (which trans youth rarely undergo before the age of 18), hormone therapy, and reversible puberty blockers.

In his statement, Trump misrepresented gender-affirming care for trans and gender non-conforming youth as the “castration of children.”

“Asa Hutchinson, the lightweight RINO Governor of Arkansas, just vetoed a Bill that banned the CHEMICAL CASTRATION OF CHILDREN. ‘Bye-bye Asa,’ that’s the end of him!” the former President claimed. “Fortunately for the Great State of Arkansas, Sarah Huckabee Sanders will do a fantastic job as your next Governor.”

Sanders, the daughter of former Arkansas Gov. Mike Huckabee (R) and the former Press Secretary for Trump, announced her candidacy for the position in January, but the next gubernatorial election is not until 2022, as Hutchinson won re-election for his second and final eligible term in 2018.

Hutchinson explained his veto further, sitting in an interview with NPR earlier this week. He also wrote an opinion article for the Washington Post. Hutchinson reaffirmed his conservative, pro-life values, quoted Ronald Reagan and claimed the bill flies in the face of what “the Republican Party that I grew up with believed in,” he told NPR host Ari Shapiro.

“I vetoed this bill because it creates new standards of legislative interference with physicians and parents as they deal with some of the most complex and sensitive matters concerning our youths,” he wrote to the Post.