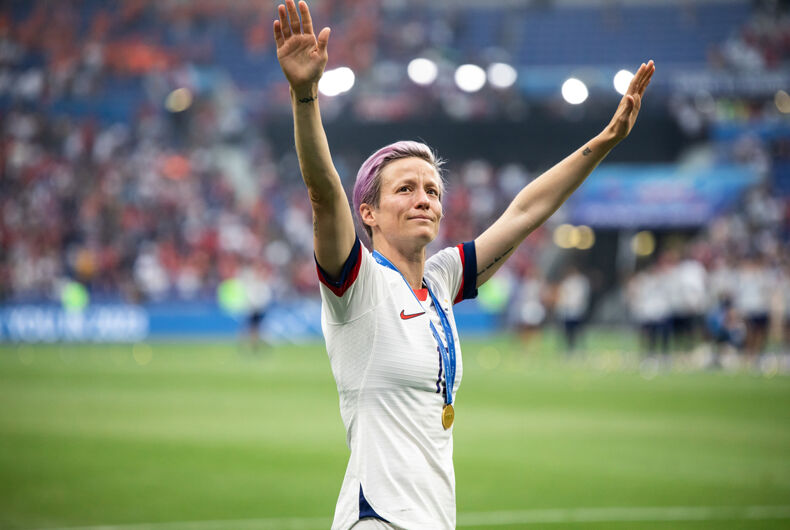 NBA player Draymond Green got schooled by soccer star Megan Rapinoe after the Golden State Warriors forward said he was tired of hearing female athletes “complaining” about being paid less than men in a series of tweets.

“I’m really tired of seeing them complain about the lack of pay because they’re doing themselves a disservice by just complaining,” Green said in a interview on the topic after the tweets. “They’re not laying out steps that they can take to change that.”

Related: Lil Nas X’s “Satan shoes” are being recalled. Do they really think people will send them back?

Rapinoe, along with women from across sports leagues, has fought the pay gap between male and female athletes. But it isn’t just the pay — and that’s not what the women have been saying.

While she responded on Twitter to his original tweets, she was asked about it again during a press conference for Team USA.

“It’s really unfortunate that in the position he’s in, having all the resources that he has and the ability to have a much more educated opinion, that he just hasn’t,” she said. “Really frustrating. Obviously, he just kind of showed his whole ass in not understanding what we talk about the whole time.”

“You don’t think that we’ve asked for more [investment]? I mean, what are we screaming about nonstop?”

“When we talk about equality in women’s sports, we always talk first about investment, and funding, and resources, and marketing, and branding,” Rapinoe added. “And investing in not just the players but the support staff, and coaching, and media, TV media, print media, all of it.”

Rapinoe recently testified before Congress and backs an initiative by President Joe Biden to equalize pay and investment in women’s sports. She and 25 other U.S. Soccer Women’s National Team members sued in 2017 over the wage gap between their pay and male players.