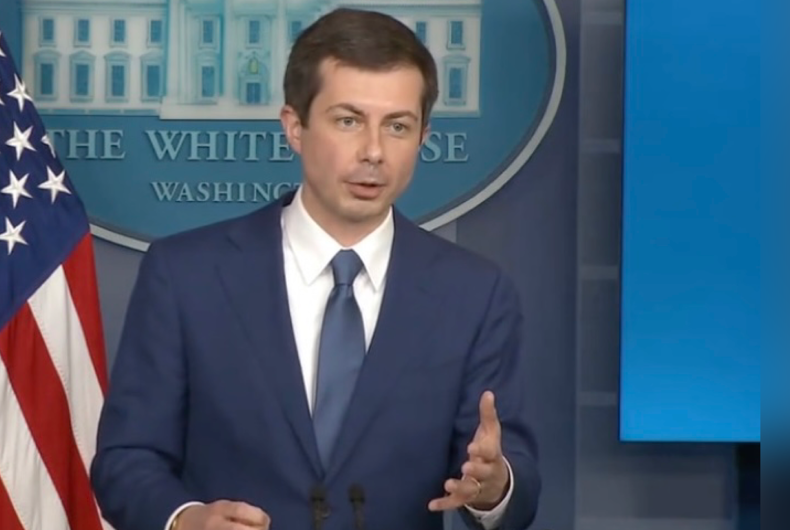 Secretary of Transportation Pete Buttigieg is hard at work promoting the Biden administration’s proposed infrastructure policies, which officials hope will reinvigorate the American economy. That’s why Buttigieg stepped to the podium yesterday alongside Press Secretary Jen Psaki at the White House, taking questions about travel and tourism-related aspects of the America’s Jobs Plan.

But the out Cabinet official ignited a different kind of public response when headlines reported that he said the government hopes people “will be able to” get back to cruising “by mid-summer.”

The “cruising” Buttigieg was referring to was sailing the seas aboard ships for leisure, a staple of the cruise and seaborne tourism industry. Not, you know, the other one.

“To Americans eager to get back overseas, whether by plane or by cruise ship, you know there have been questions about the cruise industry, especially this past week. The CDC issued some guidance, there’s concerns,” O’Keefe began, “have you been in touch with the CDC about that industry’s concerns, and to cruise industry leaders who say ‘we should be treated more like the airlines’, what would you say?”

“The bottom line is safety,” Secretary Buttigieg answered. “Look, I’m the Secretary of Transportation, I can’t wait for us to be on the move as much as possible in a safe and responsible way, but it has to be safe and responsible. Airlines, and airplanes have one safety protocol, cruise ships have another. Vehicles have another. Each one needs to be treated based on what’s safer for that sector.

“I care a lot about seeing the cruise sector thrive,” he continued. “I know that the CDC is hopeful that a lot of these operators will be in an opportunity to be sailing by mid-summer, and laying out these specific gates they need to get through, is a very important step toward that.”

“We want to do this as we responsibly can, but we also want to make sure it’s safe,” he explained when pushed for a further response on what he would say to cruise industry leaders and governors that say mid-summer is “not soon enough.”

Buttigieg didn’t exactly say the word “cruising” in his answer, but he did say the “cruise sector,” and he did say that the industry could be able to return this summer.

Eventually, reports with headlines reflecting that Buttigieg promised the return of cruising by summer spread across the internet, and it took on a very different meaning to some, becoming quick fodder for many.

have to explain to the straights that cruising is a popular gay term that also means "the act of searching about a public place in pursuit of a partner for sex." and the fact its from Pete of all people makes it funnier

I take one nap and Pete Buttigieg is talking about cruising?!? what is going ON

I hadn’t pegged Pete as the cruising type https://t.co/Nrg7DW2D9v

What are some great cruising spots, Pete? https://t.co/E5cDzvkKph

Poking fun at the double meaning of “cruising” is certainly a trip, but conservatives are actually taking the issues that the cruise ship industry is facing very seriously. The continued restrictions have become cause for them to attack the Biden administration.

This week, Florida Gov. Ron DeSantis (R) announced he is suing the CDC and the federal government because of their continued restrictions on maritime travel. That partly prompted the question, specifically the follow-up about responses to “governors,” from O’Keefe.

DeSantis claims, “we don’t believe the federal government has the right to mothball a major industry for over a year based on very little evidence and very little data,” referring to restrictions due to the COVID-19 pandemic, which some may recall was accelerated in the United States when a Grand Princess cruise ship docked in California last February and March.

The most recent CDC guidance on cruising — as in, boarding cruise ships — call “preventive measures, including hand hygiene, social distancing, and wearing facemasks or cloth face coverings” an “essential” part of reducing transmission during maritime travel.

Still, getting a sailing order to legally trek out into waters is tricky for cruise ship operators, and some in the cruise ship industry are considering the guidelines and conditions “unworkable.”

As for the most recent guidance on cruising, the CDC hasn’t issued such a document yet, but this “Safer Sex and COVID-19” document from the New York City Health Department may provide a good starting point.

Okay, so here it is: The full exchange that led to reports that @PeteButtigieg is endorsing a return to cruising. He was talking about cruising but not the kind you may be thinking of. (Although, if one’s returning, then…)

For the record, he did say “sailing.” pic.twitter.com/gTEEJib84z