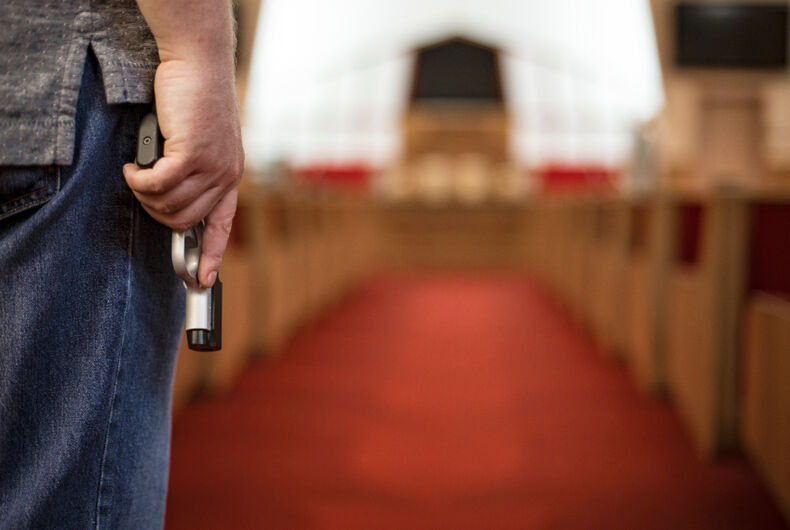 "Prophet" Jeff Jansen said that his church's ushers are manly because they carry guns.Photo: Shutterstock

A pro-Trump pastor’s wild sermon has gone viral. During the sermon, he said that Christian pastors are “almost homosexual” and “neutered,” while his church is manly because ushers carry guns.

Jesus “was a man,” said Jeff Jansen, the co-founder of Global Fire Ministries International, during a sermon in a church in Oregon this weekend. “The church, the Ecclesia, the government of God, has been so neutered and so turned effeminate, almost homosexual, I’m just telling you straight up. Straight up. It’s ridiculous.”

Why is he doubting Christian leaders’ manliness?

“The ushers at my church, they all pack,” Jansen continued. “You come to my place and you think about starting something? You’re dead. They’ll kill you. They’ll shoot you because they’re going to protect everybody else.”

“You try to pull something? You’re dead.”

“I said, ‘Listen, guys, if I’m up there preaching and somebody comes up, make sure you get them,'” he said. “Just kill them, just shoot them dead.”

"Prophet" Jeff Jansen says that Jesus was a real man and complains that the church today has become "almost homosexual." At his church, Jansen bragged, the ushers all carry guns and won't hesitate to kill you if you try to start something: "Just kill 'em. Just shoot 'em dead." pic.twitter.com/9eCXdztT5I

Jansen is a self-proclaimed prophet who runs a “miracle/healing anointing and prophetic ministry.”

Just before the 2020 election, he published a book called Trump: The Destiny of God’s America about how “national repentance and prayer is the demand, and national mercy is the promise.”

“This presidential election is critical. God will play his TRUMP card,” reads the book’s Amazon description. “The future is ours, but now is the time for action. The Destiny of God’s America is the antidote for the perilous times in which we live, offering hope for a glorious future. If we Christians are going to reverse the national trend, we must fall on our faces before God and pray.”