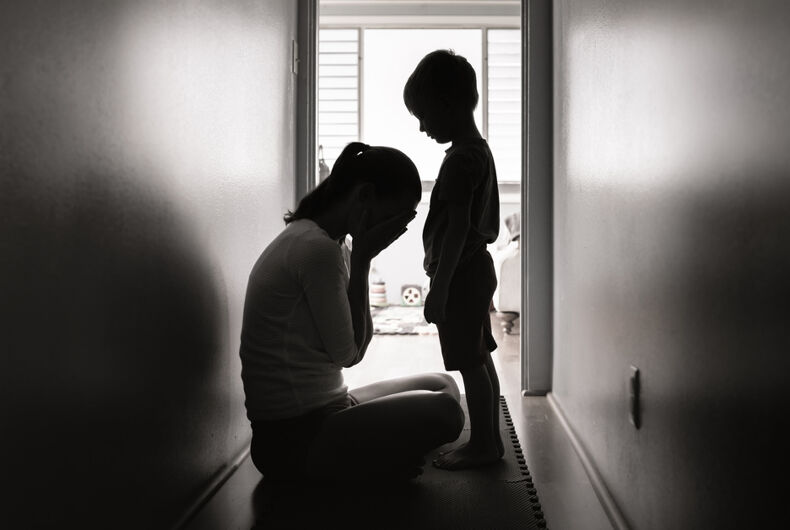 The Michigan Court of Appeals just overturned a lower court ruling that threatened to remove a mother from the birth certificates of the children that she physically gave birth to, partly because she wasn’t able to marry her partner before marriage equality was legalized in her state.

The case involved the Michigan couple Lanesha Matthews and Kyresha LeFever, who were together from 2011 to 2014. While they were together, they decided to start a family using LeFever’s eggs and donor sperm. Matthews carried and delivered their twins, and both women were named on their birth certificates.

Related: Judge who refused to let lesbian moms adopt for the silliest reason gets shut down by Supreme Court

But after they split up, the women were involved in a years-long custody battle that resulted in family court Judge Melissa Cox ruling that they were in a “surrogacy agreement” and that Matthews wasn’t actually the parent of the children she carried, citing the fact that she didn’t provide DNA for the children and she wasn’t married to the woman who did.

Cox ruled that Matthews was a “third party” to her own children and wasn’t a “natural parent” but granted her visitation rights. She didn’t get custodial rights, and Cox even ordered that Matthews be removed from the twins’ birth certificates.

“The result was outrageous,” Jay Kaplan, staff attorney for the ACLU of Michigan’s LGBT Project, told PrideSource. “You have a mom who’s been co-parenting her children, has a relationship with her children for seven years, and the court’s saying, ‘Oh, no, sorry, you’re not a parent because you’re not biologically related to the child and, therefore, I’m going to strip you of your legal status as a parent.’ And the analysis of how she arrived at that result was pretty tortured.”

The Michigan Court of Appeals overturned Cox’s decision last month, and that decision was just published.

“A woman who gives birth to a child is that child’s natural mother under the common law, and there is no reason to look elsewhere for meaning,” Appeals judge Elizabeth Gleicher stated in her opinion, separate from the majority opinion issued by judges Michael J. Riordan and Kirsten Frank Kelly.

The majority ruling remands the issue back to the family court circuit, where a new custody ruling can be issued that recognizes Matthews’s parental rights.

The majority opinion agreed that Cox’s ruling “erred” in application of state law in this case, but that isn’t ground to nullify the family court ruling altogether, because Matthews’s legal arguments also used state surrogacy law during trial hearings. Matthews argued on appeal that the entire ruling violated her constitutional rights, and the majority ruling decided that they “need not address” that issue.

“Even if the SPA [Michigan Surrogate Parenting Act] applies, defendant remains a ‘natural parent,'” they declared, but “the trial court’s erroneous conclusion that the SPA applies does not alter the outcome of the case.”

Gleicher concurred with the majority but issued her own opinion to “propose an additional analysis, and to address the constitutional questions the majority abjures,” or “rejects” considering, in other words.

“My colleagues devote considerable effort to unraveling the meaning of ‘natural parent,’ consulting four different dictionaries before ultimately concluding that the term ‘is elastic enough to include’ a child’s birth mother. This dictionary-driven search for a suitable definition is unnecessary,” Gleicher opined.

Noting that “this case involves children born to lesbian women who were legally prohibited from marrying at the time of their conception,” Gleicher stated that “under the common law, an unmarried woman who gave birth was always considered the mother and had no need to legally establish her custodial rights.”

“In my view, the constitutional issues presented are weighty and merit consideration, particularly because they may become relevant on remand and in similar cases,” Gleicher added. She expressed concern that this issue could happen again, including to women in a same-sex marriage, and this “remains unaddressed” with the majority’s ruling.

“LeFever and Matthews also have a constitutional right to the custody of their children,” she emphasized.

Kaplan recognized the significance of Gleicher’s ruling, while acknowledging that it isn’t binding because it wasn’t in the majority opinion.

“It’s relatively rare that in a state court the judges will weigh in on these constitutional issues. I think that’s really significant,” he said.

“In my opinion, it was so blatantly obvious what the lower court did, how wrong it was, how wrong the conclusion was, and how the judge [incorrectly] reached this conclusion, that this decision needed to be overturned,” Kaplan said.

“Through some very kind of twisted analogy, the family court judge decided that this relationship was like a surrogacy parenthood agreement. And the gestational mom, because she wasn’t related by genetics, that she was not a natural parent.”

“What was flawed about this in so many ways is that most state courts do not define a parent solely based on being genetically related. We have people who adopt children; we have heterosexual couples who use reproductive technology who might not be able to have children on their own.”